'Like kicking a dog when it's down': DOJ investigates Phoenix homeless cleanups

Experts say the sweeps have resulted in many losing everything from blankets to social security cards. They say the sweeps also coincide with breakfast service. 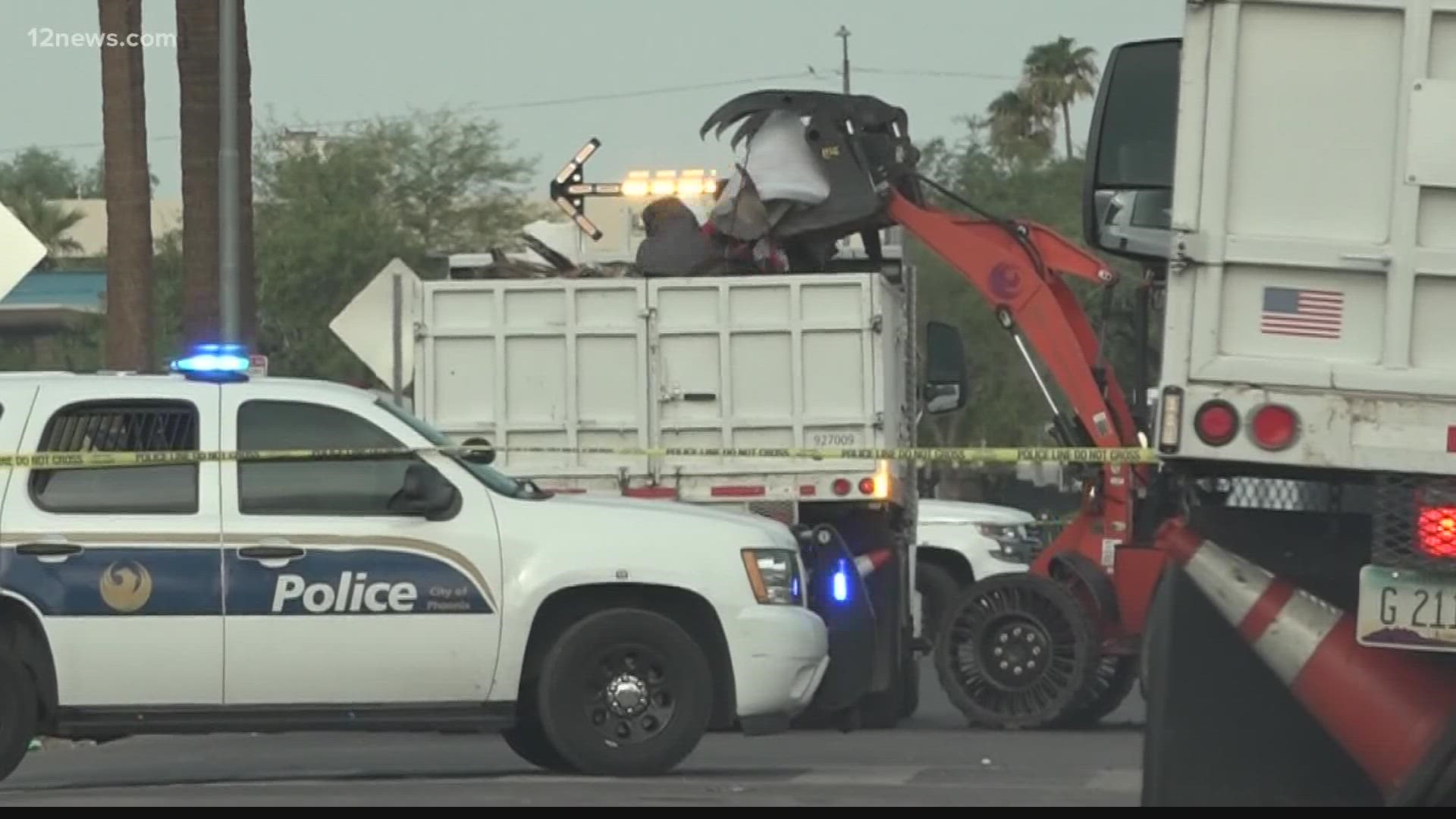 PHOENIX — Homeless street cleanups near the largest shelter in the state are continuing after the Department of Justice announced it is investigating the practice among a laundry list of other things.

The cleanups happen every Monday, Wednesday and Friday mornings around 7 a.m. in the area of Madison Street and 12th Avenue where hundreds of people experiencing homelessness have tents set up.

The sweeps, which are announced by Phoenix police officers on loudspeakers starting around 6 a.m., are no surprise to those experiencing homelessness in the area but it means they must move all of their tents and belongings or they risk all of it getting trashed.

Experts said the sweeps have resulted in many losing everything from blankets to social security cards. They said the sweeps also coincide with breakfast service at St. Vincent de Paul, forcing some to choose between eating and protecting their possessions.

"They treat you like you’re the dregs of society"

According to the most recent Point in Time count, in January 2020 before the pandemic, there were 7,419 people in Maricopa County experiencing homelessness. Of that number, 3,767 were unsheltered.

CASS has 470 beds and the streets just outside are as close as many can get to a spot inside. That means everyone's belongings are on the streets, too.

“It’s taking advantage of people when they’re down and out. It’s like kicking a dog when it’s down," said Gina Deann Morgan.

Morgan said she has experienced homelessness off and on for more than twenty years.

“You don’t get much respect. They treat you like you’re the dregs of society. Like you’re all drug addicts and you’re all thieves," said Morgan.

In early August, Attorney General Merrick Garland announced that the Justice Department opened a pattern or practice investigation into the City of Phoenix and the Phoenix Police Department.

Investigators will look at a wide array of issues from excessive force by police to the treatment of Phoenix's unsheltered community. That includes frequent street cleanups.

According to a City of Phoenix spokesperson, in April of last year, Phoenix's Street Transportation Department began cleaning three times a week except for holidays.

The spokesperson said the purpose of the cleanups is to "protect the health and safety of people living in and around the encampment."

But it's drawn the attention of the Justice Department because some have lost everything they own.

“Someone recognizes that there are issues with how people experience homelessness are treated," said Amy Schwabenlender, the executive director of the Human Services Campus.

The Human Services Campus is a 13-acre property that serves 800 people per day on Madison Avenue. It features nearly everything a person experiencing homelessness would need from a post office to a state-of-the-art dental office.

Schwabenlender has a front-row seat to the issues Phoenix has when it comes to helping this growing population, including the cleanups.

“That can be really detrimental and devastating because there are people’s items like their ID or a copy of a paystub and you can’t get a lot of cash assistance without proof of income," Schwabenlender said.

So how much do the cleanups cost?

A Phoenix spokesperson said it costs about $500,000 per year. Schwabenlender believes that money could be better spent elsewhere.

“If we had used that money to create more temporary shelter or bridge housing options, I think we could have brought a lot more people inside and the sidewalks wouldn’t have been dirty," Schwabenlender said.

For now, the sweeps continue.

Morgan said she hopes the federal investigation will help tackle what she believes is the root of Phoenix's problem - adding affordable housing and preventing folks from losing their homes to begin with.

“The programs need to be more as far as housing goes. Something’s got to be done about the rate that they charge for housing nowadays," Morgan said.