The controlled demolition was a direct result of a Union Pacific train derailment and massive fire on the bridge last week. 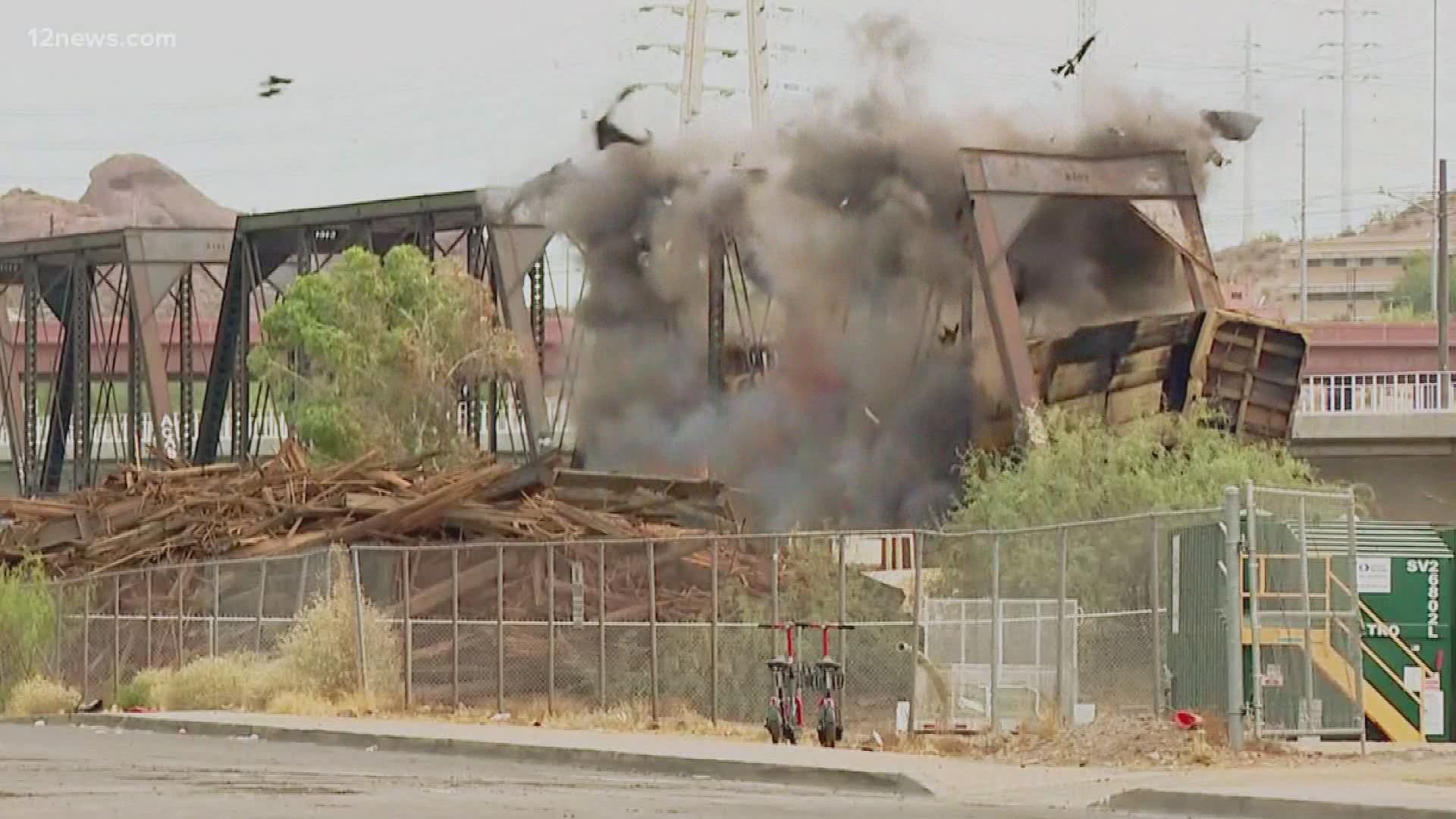 TEMPE, Ariz. — Just five days after a train derailed and caught fire on the Salt River bridge over Tempe Town Lake, a portion of the bridge and two rail cars came crashing down in a planned explosion Sunday morning.

This was the next step necessary for crews to go in, clean up, and take steps toward rebuilding the damaged bridge.

The demolition happened around 8:15 a.m. Sunday after the Tempe Police Department and other work crews swept the nearby area.  Some residents were asked to evacuate, while many sheltered in place.

The Tempe Fire Department says the demolition went as planned with no injuries.

The controlled demolition was a direct result of a Union Pacific train derailment and massive fire on the bridge last week.

The cause is still under investigation, along with another Union Pacific train derailment in the exact same spot back in June.

"To me it sounded like the biggest drum I ever imagined," ASU student Britton Vickers said, who watched the explosion from his apartment complex. "Somebody hitting it with the hardest stick they could."

Vickers moved into the complex about two weeks ago with Abbi Lee.

"We had a couple of days of enjoying the park and right after that it was cut short," he added.

At this point, Union Pacific and other response crews are clearing away the debris, so they can safely start bringing in materials to rebuild the bridge.

They don’t think any other parts of the bridge will have to come down, although they’re still investigating the damage.

Tempe Fire says the two rail cars that were stuck on the bridge were carrying hazardous chemicals and even hurt two workers during the cleanup after the derailment.  12 News is told both workers are now doing okay.

The chemicals were removed before the demolition, but there was still residue left and people still need to steer clear.

"We still do have a hazard," says Andrea Glass, assistant chief with Tempe Fire & Rescue, said. "Still have a hot zone."

This is why some of the roads around the bridge are blocked off and the park and lake are shut down.

Union Pacific says the goal is to get those train cars out of here by the end of the Sunday.  Then, they'll bring in materials to start rebuilding the new bridge.

Officials say the portion of road that runs under the bridge will likely be closed until a significant portion of the bridge is repaired.

The Union Pacific emergency claims line is 1-877-877-2567, option 1, for any affected residents who feel they incurred costs as a result of the Sunday demolition.

As for reopening Tempe Town Lake and Tempe Beach Park, city leaders say they’ll have a better idea when that will happen in the next couple days.

For updates from the City of Tempe, you can visit their website.

City of Tempe, AZ
﻿ Show/Hide The train derailment near Tempe Town Lake is being investigated and cleaned up. Road closures are still in effect and Tempe Beach Park is closed. People should remain out of the area.