Monsoon timeline: Valley got another taste of monsoon storms Tuesday

Storms began in the High Country Tuesday afternoon, and it wasn't long before strong storms developed over Pinal County before moving northwest into the east Valley.

10:10 p.m. - Showers will continue overnight with rainfall rates up to 1 inch per hour in localized spots, which may generate flash flooding.

The best chance for shower activity Wednesday morning will be across western Arizona, but Valley could see some activity as well.

9:20 p.m. - The rain rates began picking up again across the Valley and in Pinal and Gila counties. Rain could affect the morning commute on Wednesday with slick roads and minor flooding.

8:30 p.m. - Storms and showers will continue in Maricopa, Pinal and Gila counties through the overnight hours, along with the possibility for flash flooding. A flash flood watch for south-central and southwest Arizona has been extended to 8 a.m. Wednesday.

8:10 p.m. - Drivers are being asked to slow down as rain along the I-17 between Phoenix and Flagstaff forms slick spots on the highway.

7:41 p.m. - The rain isn't done with the east Valley yet. Showers and storms continue to form across Pinal County and move northwest.

7:21 p.m. - A large storm cell is dumping heavy rain in the area of Maricopa. A flash flood warning for Sacaton and Santan associated with this storm cell continues until 10:15 p.m.

7:18 p.m. - Heavy rain over the Cellar Fire scar has ended, but the National Weather Service says further thunderstorm development is possible. A flash flood warning for the area remains in effect until 8:30 p.m.

6:47 p.m. - Mesa fire crews said a large tree blew over and uprooted a gas line running beneath its root system in the area of McKellips and Gilbert roads. Nine homes had their gas shut off because of the resulting gas leak.

Two other trees fell over in the same area, knocking down power lines to two separate homes. Fire crews said one of the trees also caused structural damage to a guest house in the backyard.

There were no injuries, and firefighters said all homeowners should be able to stay in their homes through the evening.

6:19 p.m. The National Weather Service in Phoenix says to expect thunderstorms in Glendale and Peoria in about 30 minutes.

6:05 p.m. - A power pole was knocked over in east Mesa near Recker Road and Loop 202. Police appeared to have the roadway blocked as crews worked to repair it.

6:03 p.m. - Downtown Phoenix saw some rain and strong wind gusts as the storm continued northwest. The storm is expected to impact portions of the west Valley through 7 p.m.

Blowing dust was spotted near the Interstate 10 stack.

5:36 p.m. - A wind gust in east Mesa was measured at 68 mph as the storms drench the east Valley. The storm is starting to weaken as it moves northwest.

Brand new storms are developing to the south along the Interstate 8 corridor and just north of Casa Grande, keeping the blowing dust risk alive through the evening.

The National Weather Service predicts there's a 50% chance of rain and thunderstorms in the Phoenix area Tuesday night. You might have to keep an eye out for dust storms popping up throughout the area also.

And there will be some relief from the heat Tuesday evening going into Wednesday. Wednesday's high will be 97. This is a break from the 100-degree daytime temperatures we've been feeling for the past few weeks.

Wednesday, clouds will mostly hang over the Valley bringing some rain and thunderstorms. Windy conditions could stir up some dust storms but calmed winds are expected by Wednesday night.

And just as fast as it comes, it'll go. Thursday morning, there will be some rain showers and thunderstorms, but things are expected to clear up by the afternoon. Thursday's high in the Valley is 100 degrees.

Temperatures are expected to continue to climb into next week as the stormy weather passes through. By Sunday, we'll be right back where we started the week off with highs over a 100 degrees. 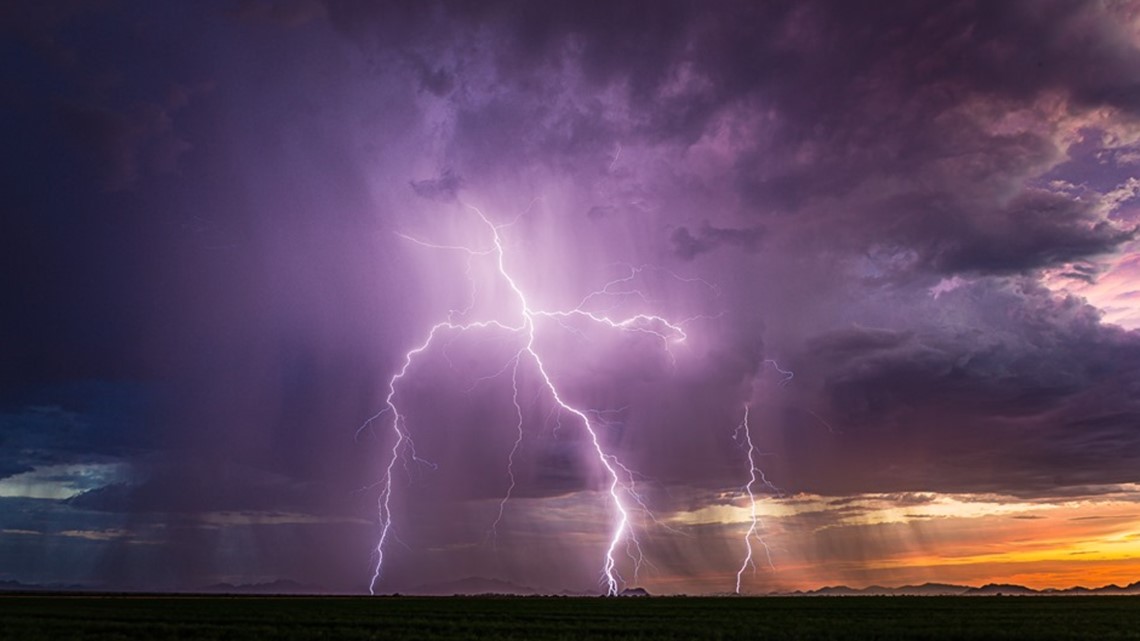