Where is MLK's dream more than half a century later?

Where is Dr. King's dream today? “We have to get to a place where we stop denying the black experience." 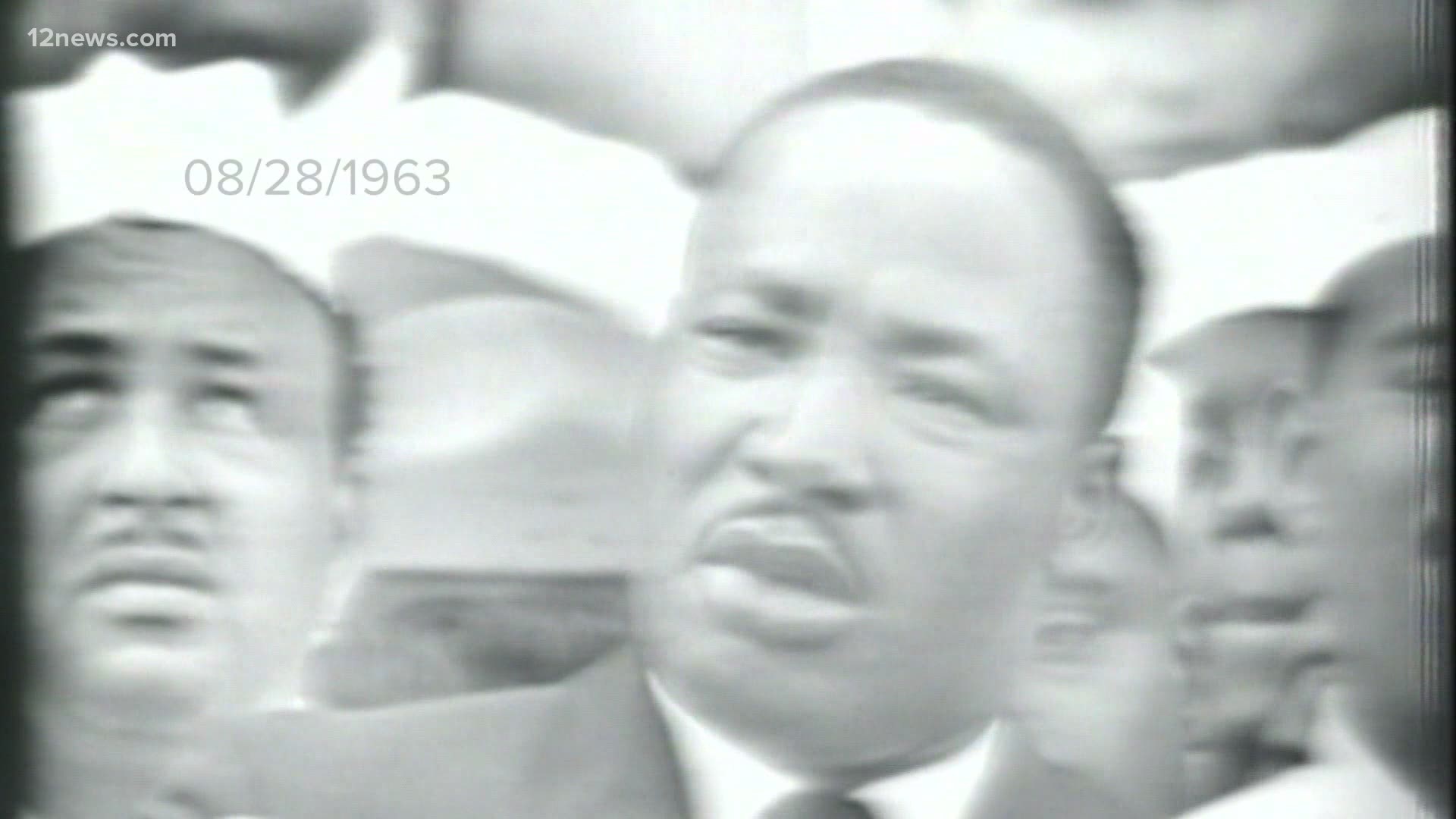 PHOENIX — It's been more than half a century since American civil rights icon, Dr. Martin Luther King Jr. delivered his historic "I Have a Dream" speech from the steps of the Lincoln Memorial during the 1963 March on Washington.

"I have a dream that my four little children will one day live in a nation where they will not be judged by the color of their skin, but by the content of their character," King said, overlooking an estimated 250,000 civil rights leaders.

Historians consider the speech one of the greatest calls for equality in American history.

Where is Dr. King's dream today?

Last year's Black Lives Matter protests following the deaths of George Floyd and Breonna Taylor at the hands of police, as well as the murder of 25-year-old Ahmad Arbery, who was pursued and fatally gunned down while jogging near Brunswick, Georgia, by three white men, sparked renewed calls against systemic racism.

“The dream is still there in spirit and we are living out, he gave us a blueprint and we’re all on that plan,” said Phoenix social justice advocate Reshauna Striggles.

Striggles was one of the many young voices who protested racial injustice on Phoenix streets last summer.

She says the power of King’s dream today is the call for each of us to make a change from within.

“It’s far removed, to be honest, and you can look at it from a political spectrum right now - how some people in the Republican Party are even sharing MLK posts but they could care less about many of the things MLK championed,” said Mesa Pastor Andre Miller.

In today's update, Chairwoman @kelliwardaz thanks the patriotic rallygoers who attended President Trump's speech, encourages the peaceful protesters who are fighting for #ElectionIntegrity to not lose heart, and condemns the anarchists and rioters who stormed the U.S. Capitol. pic.twitter.com/PtGpriOXIK

In a Jan. 7 tweet, Arizona Republican Chairwoman claimed: "Barbarians stormed the gate, and in my opinion, I think some of those were agitators that were brought in, whether they were Antifa or BLM (Black Lives Matter) or just outright anarchist, I don't know."

Tens of thousands marched peacefully to the Capitol to make their voices heard. Several dozen, including members of Antifa, made the reprehensible decision to riot, criminally trespass, and commit violence. Punish the perps, stop gaslighting the innocents. pic.twitter.com/PoLURR4zrc

On Jan. 11, the AZGOP tweeted a video claiming "several dozen, including members of Antifa, made the reprehensible decision to riot, criminally trespass, and commit violence."

But there is no evidence of BLM or Antifa involved in the attack.

Miller says King’s dream is twisted in political hypocrisy and seen by some Republican legislators who make the false equivalency between pro-Trump insurrectionist attacking the Capitol and protest against systemic racism.

“We have to get to a place where we stop denying the black experience. If you look at what happened in the Capitol, if those were other marginalized or minority groups, the response would have been totally different and that is a fact in this nation,” said Miller.

On June 2, 2020, a Black Lives Matter protest held in Washington after the death of George Floyd, National Guard troops stood on the same steps as King when he delivered his 1963 speech.

Striggles says the Biden administration gives King's dream of equality a new chance to be fulfilled through policy ending systemic racism if legislators work together.

“We need to focus more on the policies, the laws, the bills, the system as it works itself.”