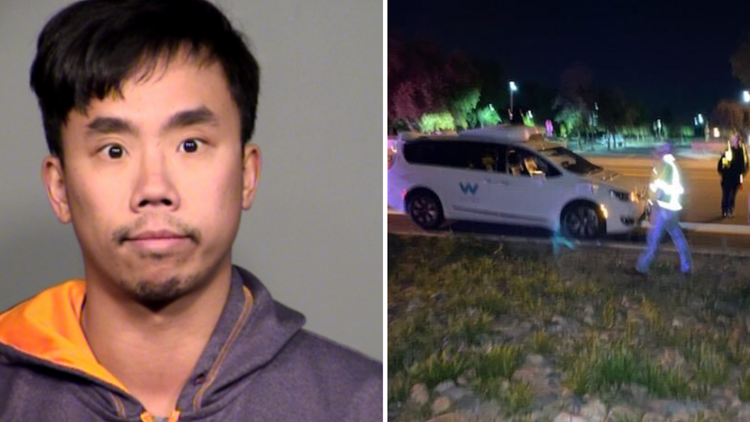 Tempe police arrested a man who they say intentionally caused a crash with a Waymo vehicle in Tempe last month, and the department released video of the incident.

Police say 31-year-old Raymond Tang drove recklessly around the Waymo vehicles on purpose in an attempt to cause a collision. Eventually, one Waymo vehicle bumps into the back of Tang's Mazda. The collision was captured on video by another Waymo vehicle in the area.

Video released by Tempe PD shows the Mazda swerving toward the Waymo vehicles.

The collision is shown in the below video. Waymo said the driver of the van was operating the vehicle in manual mode at the time.

Tempe PD's investigation also revealed that Tang was a former Genesis10 vehicle operator whose assignment with Waymo concluded nearly a year prior.

In an interview with police, Tang admitted to “brake-checking” the Waymo vehicle that rear-ended his vehicle.

The driver of the Waymo vehicle was taken to a local hospital with minor injuries.

Tang is charged with felony aggravated assault, felony criminal damage and misdemeanor charges of endangerment and reckless driving. He was booked into Tempe City Jail.

Police now say there are similar incidents in the past with Waymo vehicles that Tang may be involved with. Those incidents are being investigated by the Chandler Police Department.

Waymo released a statement through Tempe PD calling Tang a "disgruntled" former employee and confirming this is not the first time he has engaged in criminal activity with Waymo vehicles. The full statement is below:

“We can confirm that the reckless driver who intentionally and aggressively cut off our manually-driven vehicle on the night of January 30 in Tempe, Arizona, and who has now been charged by Tempe police, was a disgruntled former Genesis10 vehicle operator whose assignment with Waymo ended nearly a year ago when he failed to meet the high safety standards. Prior to the incident on January 30, this same individual had engaged in similar conduct, which resulted in misdemeanor charges for disorderly conduct and criminal damage against him in November 2019. Incidents such as this one reinforce the importance of Waymo’s mission: to make it safe for people to get where they’re going and to help save the thousands of lives now lost to traffic crashes caused by humans.”