In Arizona, teaching creationism is supported by 4 of 5 Republicans who want to oversee education

At a forum for Republican candidates for school superintendent last November, four of the five candidates - including Superintendent Diane Douglas - supported teaching creationism in Arizona schools. 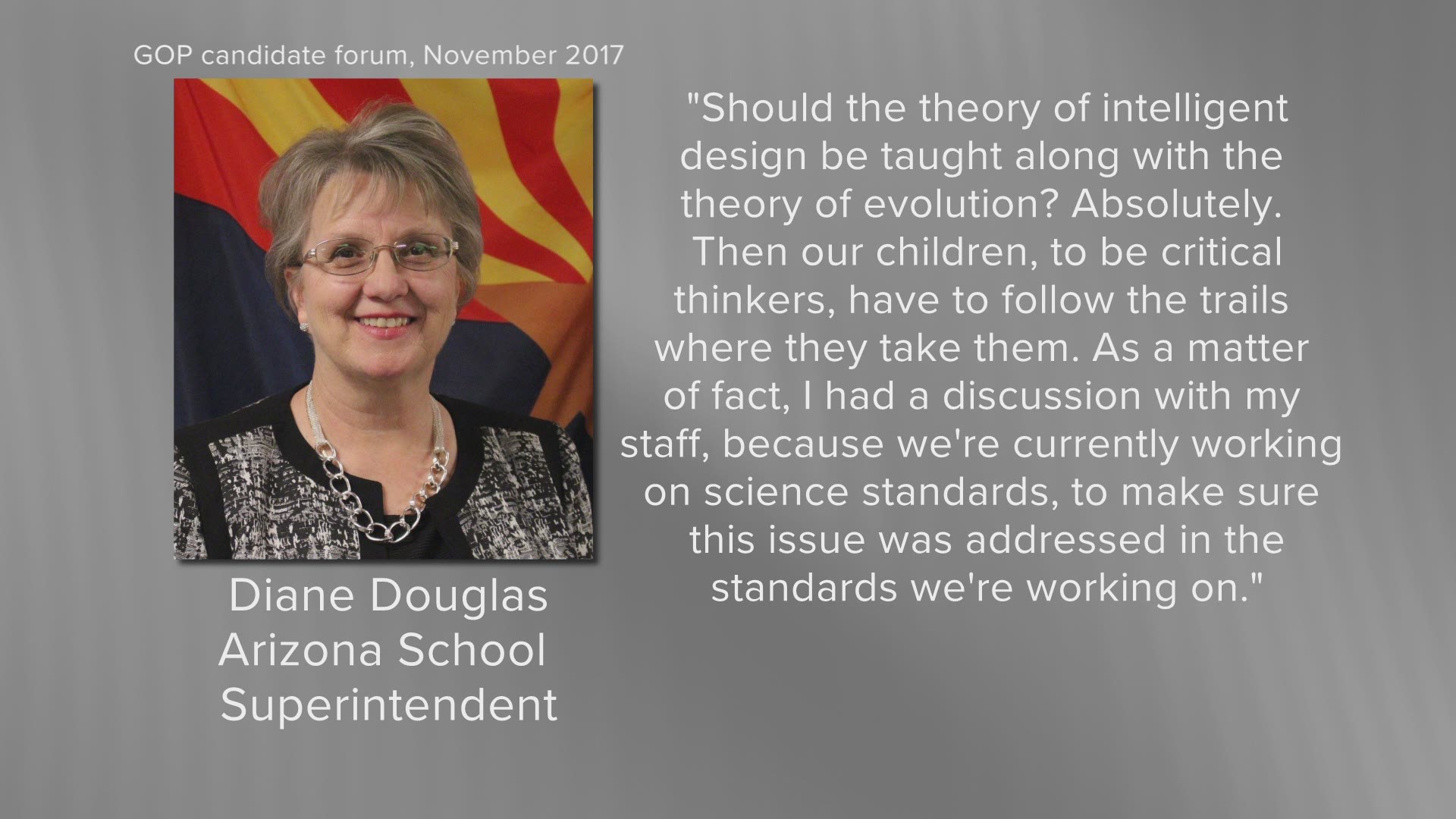 The Arizona Department of Education is updating science standards for K-12 schools for the first time in about 15 years.

Teachers who worked on the standards told 12 News they were shocked when the words "evolution" and "evolve" were crossed out of their draft.

The deletions apparently had the approval of Republican School Superintendent Diane Douglas, who runs the Department of Education. She supports the teaching of intelligent design - a rebranding of creationism, which is the religious belief in the existence of a creator.

MORE: Arizona could roll back teaching of evolution in classroom

Thirty-one years ago, the U.S. Supreme Court ruled the teaching of creationism in public schools was unconstitutional.

Thirteen years ago, a federal judge in Pennsylvania rejected public-school instruction on intelligent design as unconstitutional.

At a forum for Republican candidates for school superintendent last November, four of the five candidates - including Douglas - supported teaching creationism in Arizona schools.

Audio from the forum was provided to 12 News.

Here are the five candidates' responses at the forum to this question: Do you believe that intelligent design should be taught alongside evolution in the science classroom?

Frank Riggs: "Absolutely. No question about it."

Diane Douglas: "Should the theory of intelligent design be taught along with the theory of evolution? Absolutely, and then our children, to be critical thinkers, have to follow the trails where they take them. As a matter of fact I had a discussion with my staff, because we're currently working on science standards to make sure this issue was addressed in the standards we're working on."

Bob Branch: "I already put out there that I teach for Liberty University (a Christian school). I also teach for Grand Canyon University (a Christian school), so how do you think I feel about this question? The reality is I wholly believe it. So the reality is, it should be taught ... I see teachers all the time, especially over at at Grand Canyon University, who wish that they could go in and actually work with the child and teach intelligent design. It needs to be done ... Two years ago, three years ago at Walmart, it was not even allowed to say 'Merry Christmas.' We showed that we, as Republicans, can change this world. We, as Republicans, can make this happen."

Jonathan Gelbart: "I don't think it's a good idea to have government bureaucrats teaching religious ideas in our public schools. I don't think that's a good idea. If you're going to teach intelligent design, what's to stop someone from arguing that, OK, you have to also teach the Buddhist theory of creation and the Hindu theory of creation and every religion? I think it's a slippery slope there. So I would not recommend adding that to the school curriculum. I think we need to stick to scientific theories in school, and whatever people want to learn from their parents or from their churches, at home, in their communities, that's fine with me. But it shouldn't be in our schools."

Tracy Livingston: "We used to be able to say 'Merry Christmas.' We used to be able to say 'God bless you' with no fear. I will tell you, should we teach intelligent design? Yes, definitely. There are teachers that do it. They're the ones that shut their door and say, 'Yes, this is our curriculum, but you know, we have more here.' ... Do I feel that science should be amply supported and looked at from both sides? Yes. But we've got a problem here in this state, and it's reading and writing. Would I get rid of science and that subject area and focus all on reading and writing? No. But that's something we have to look at in this state. These kids aren't ready to go to college. Then we can look at how we're going to intelligently insert God back into the classrooms, because that's going to be a tough one. But yes, I think it should be done."

The new state science standards must be approved by the Arizona Board of Education, which could come as soon as next month.

The public can comment until May 28. You can provide feedback online at this link.