In Arizona, animal rescues and other animal care operations don't get regular inspections and don't need a special license. 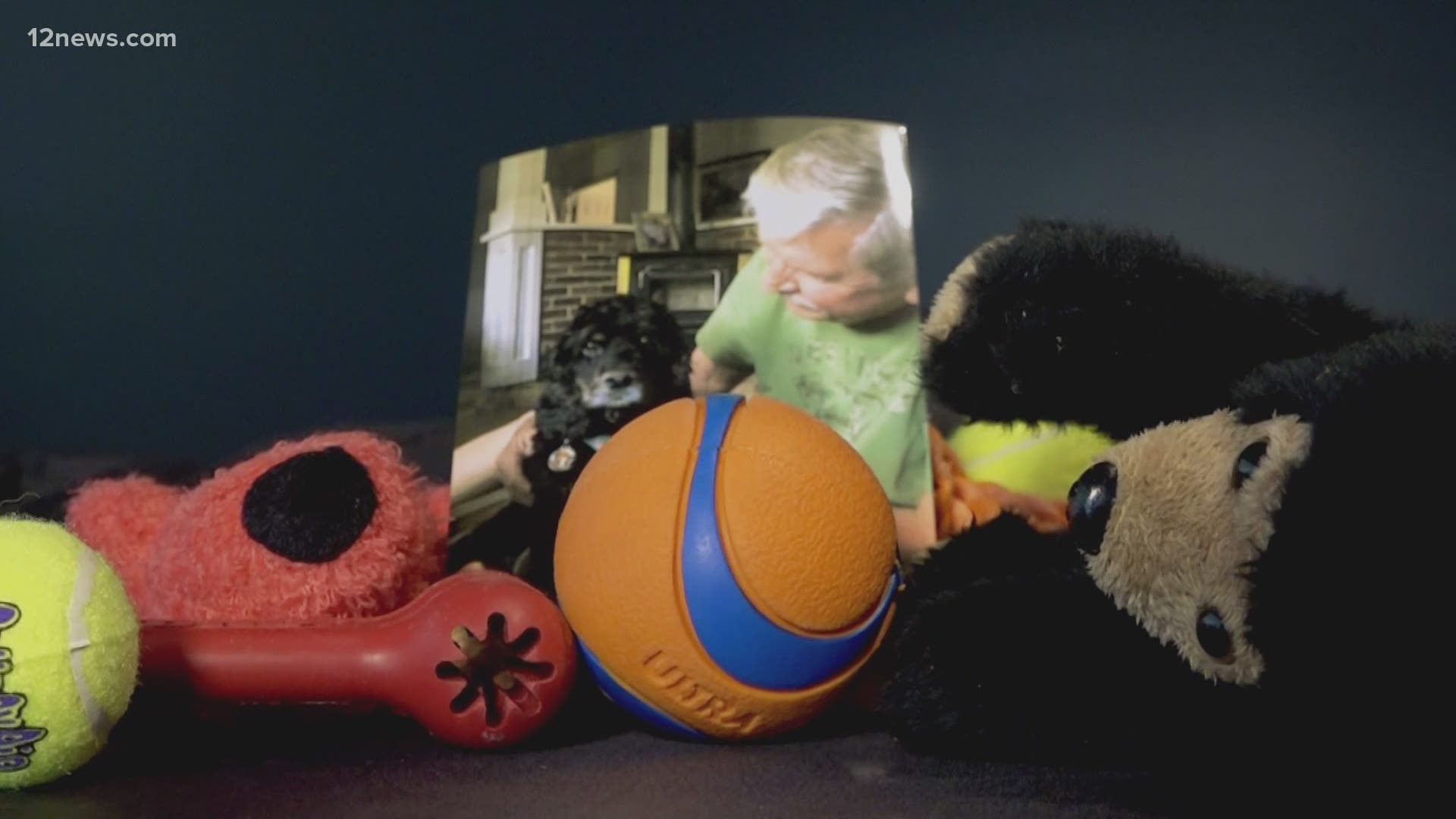 PHOENIX — For Annette Satterlee, it was the picture that caught her eye. An ad online to adopt a purebred Cocker Spaniel.

She and her husband Duke wound up adopting Duke in May 2019.

But nine months later, everything changed.

“In February of this year, he went outside one morning and my husband said there’s blood gushing out of his nose," she remembers.

Duke was dying before their eyes. After rushing him to the vet on a Friday in February, they had to make a difficult decision.

“We had to let him go that Monday,” she says. “It was tough with Duke because it was so unexpected and we had him for such a short amount of time.”

They adopted Duke through AZ Dog Adoptions, a rescue based in Phoenix.

They knew he was an older dog, but after they took him home, she says they had to spend nearly $2,000 in vet bills out of pocket.

When Annette tried to get more information about Duke’s medical history, the rescue’s director unleashed a bombshell.

Investing time, money and love in a dog destined to die.

“It was just kind of a money-making thing for her,” Annette says. “Instead of doing what you would think when you’re looking to adopt a dog from a rescue.”

The rescue’s director, a woman named Angi Hopson, comes with a history of her own.

Watch an extended version of the story here.

“The conditions at the shelter were horrible,” says Karen Saliski. “Her money making and bookkeeping were suspect. The vet care for the various animals in her care was non-existent. Or she did it on her own claiming to be a vet tech.”

Saliski used to serve on the board there. She says she had to walk away after witnessing horror after horror.

Karen, plus other former volunteers who worked for Hopson, told 12 News it was tough to see where adoptions and donation fees were really going. Karen remembers one instance where she saw Angi pocket $700 in cash.

She’s not the only witness.

“The rescue community is the wild west,” says Sue Carbone. “It’s a free-for-all.”

Carbone says she also used to volunteer for Angi Hopson through Arizona Small Dog Rescue.  She remembers one time where she took a foster dog to the vet for some eye care.

“Angi got wind of that, that I took the dog to the vet and she called me and basically told me I made that dog unadoptable,” Sue remembers. “So instead of thanking me, for saving this dog’s sight, I was reprimanded. That’s when I knew things weren’t right.”

In Arizona, animal rescues have little regulation. There are no special licenses, no regular inspections.

“You could literally put a little shingle out on your home and say I’m a rescue,” Carbone says.

Time after time animal investigators in the Valley are finding some rescues and other care facilities aren’t as they seem.

Shelter Paws in Mesa, Wiggle Butts Rescue, Mayvn Dog Rescue and Planet Petopia boarding facility were all raided in recent years, leading to the seizure of hundreds of animals in deplorable conditions.

“There is not really an agency or really an ability under the current laws that allows any one agency to check in and regulate these large operations,” explains Ruthie Jesus, field operations manager and animal cruelty investigator with the Arizona Humane Society.

“That can be very difficult to catch people and stop people.”

Jesus and her team respond to an average of 7,400 animal cruelty cases a year in the greater Phoenix area. In many cases, they work with local law enforcement to investigate. She notes not all calls turn into cases that come with charges or prosecution.  Many cases are connected to individuals or operations in hoarding situations that have gotten out of control.

“Sometimes people get a little nervous we’re there to take their animals,” Jesus tells. “That is the bottom of our list of what our goal is. Our goal is to get to know families and their situation then escalate to police as needed.”

In December 2018, investigators seized 45 dogs from Angi Hopson’s AZ Dog Adoptions in an animal cruelty investigation. The Arizona Humane Society says two of the animals passed away and five had to humanely be put to sleep.  A court hearing, a prosecutor states, “the conditions there were not suitable for dog living” noting “unclean cages, no food, no water.”

In April 2019, another dog was seized from the facility with “maggots” and “pinkeye,” according to court hearings.

That means Hopson’s AZ Dog Adoptions rescue was still active after the raids, which ultimately led to Annette Satterlee adopting out Duke.

Hopson was ultimately charged with more than 80 counts of animal cruelty.  In May 2020, she took a plea deal with no jail time.  She was sentenced to three years probation, in which she’s not supposed to work with new animals.

In November 2020, she was ordered to pay more than $51,000 to the Arizona Humane Society in restitution for their work and the care they had to provide animals seized from her facility.

It’s not clear when the operation stopped working out of the facility in South Phoenix at 19th Ave and the Durango Curve.

Hopson left Arizona Small Dog Rescue in 2015 and hasn't been associated with the rescue since, according to current staff.  The organization now operates under new management and a new Board.

In a statement on social media, Arizona Small Dog Rescue says, in part, they want people to understand Hopson is no longer affiliated with their rescue:

"While Angi Hopson was the founder of Arizona Small Dog Rescue, her welcomed departure took place in 2015 after a new Board refused her demands of a high six figure salary and her questionable business practices...For the past five years our management team and staff, under strict supervision of a new Executive Board, has worked tirelessly to ensure that our number one priority is the physical and mental health of the dogs in our care."

12 News tried to reach Hopson over the phone and at home, but she was not available to answer our questions.

In a recording of her May 2020 sentencing hearing, you can hear her blame employees for the conditions.

“I had gone back to school to become a veterinarian,” she said. “I hired people to take care of my shelter. This is what happened when I was gone.”

“It’s simply not the truth,” Saliski argues. “It was an easy way to earn a living without being held accountable.”

Saliski now lives in Tennessee where she’s working on starting an animal sanctuary.  She says she’s tried to advocate to Arizona lawmakers before to prompt changes in rescue regulations.

For families like Annette’s, any accountability could have spared them the pain.

“We miss Duke,” Satterlee says. “It won’t stop us from adopting in the future. But I definitely will do a lot more research where the dog comes from and who’s behind it.”

Sue Carbone now runs her own non-profit working with animals called Annie’s Rescue Ride and encourages people to do their research before adopting.

“When people do the right thing and go to a rescue and go to a shady rescue like Angi’s and have a bad experience, they don’t want to rescue again,” she says.

Some advice from investigators and other rescue volunteers

As an investigator, Ruthie Jesus says a lot of their tips for animal cruelty come from Good Samaritans who notice something off in their community.

“A lot of time these folks know what they’re doing is wrong because it can be very well hidden.”

Here are some signs to look for:

She adds that online animal sales make it tougher to investigate and stop people who might be violating the state’s animal cruelty law, especially if people report photos without addresses or names.

“It’s tough to know what you’re getting when you buy online,” she says. “If you see a puppy and absolutely want to rescue this puppy we would always encourage you to ask to see the living conditions, ask to see where they’re from. Ask for medical records.”

This is part of an ongoing 12 News investigation into regulations at animal care operations. Please check back for continuing coverage.

If you have had an experience like one of the people detailed in the story, please fill out the form attached. You may be contacted by a 12 News reporter.