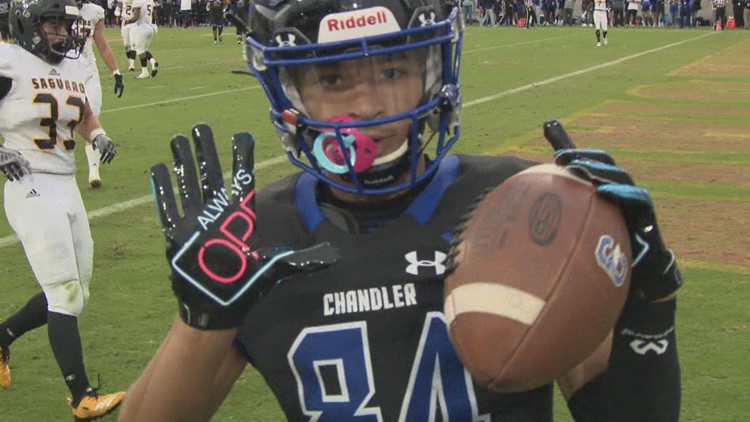 TEMPE, Ariz — The state of Arizona finally got what is had been waiting for in a Chandler vs. Saguaro matchup for a state championship. The Chandler Wolves went into Sun Devil Stadium riding a 25-game win streak and Saguaro, a 10-game win streak.

The first ever Open Division started exactly how Chandler wanted.

Mikey Keene had a great start, throwing and running for a touchdown in the first quarter to take a quick 14-0 lead for Chandler.

On the ensuing Saguaro possession, things got even worse for the Sabercats as Brandon Buckner picked off Tyler Beverett and took it to the house for a touchdown and a 21-0 lead now for the Wolves.

Saguaro stuck around and battled, though, beginning with a 19-yard touchdown run by Kelee Ringo.

Chandler would take a 28-7 lead into the half.

The Sabercats and eventually closed to 35-28 early in the fourth quarter on touchdown passes from Tyler Beverett of 70 yards to Denzel Burke and a 14-yarder to Will Shaffer.

Chandler's Daveon Hunter, capped off a long fourth quarter drive with a 4-yard TD to make it 42-28 Wolves with three minutes to go. Saguaro added a touchdown in the final minute, but would fall to Chandler 42-35.

It capped off a perfect first season for Chandler head coach Rick Garretson.

"I'm just proud of our boys, I'm proud of our coaching staff, unbelievable journey," Garretson said after the game. "The resiliency we showed. Saguaro is a great football team, coach Mohn and his staff did a great job and we're happy to holding the trophy at the end of the night and be the last man standing."

"It's hard to 4-peat and we've got five of the last six (state titles), so it's all good in C-town," Garretson said.

Chandler running back Daveon "Dae Dae" Hunter finished with nearly 300 yards rushing and was a force the entire game.

"There was just a lot of field open, great blocking and it turned into a big game for me, a big game for everybody," Hunter said. "You've gotta fight until the end of the game and everybody did and we won and that's all that matters."