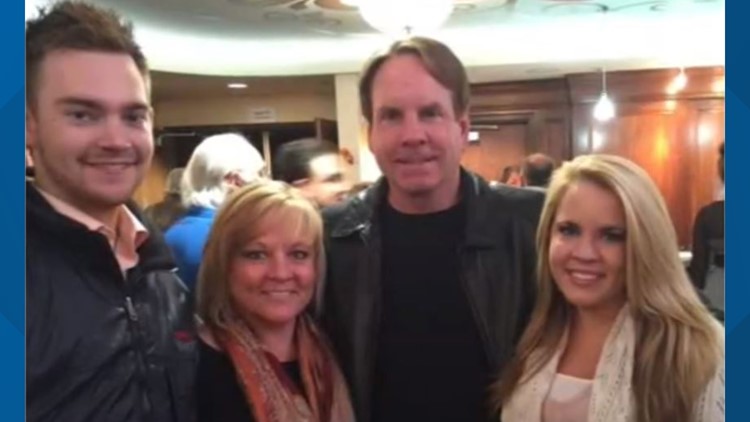 How to 'Keep Looking Up' after tragedy and suicide

A new book released Monday shares insights on how to heal after unimaginable tragedy and heartbreak.

"Keep Looking Up, Transforming Grief into Hope after Tragedy" shares the story of Carey Conley and Laurel Conley Wilson after losing the two men in their family to suicide.

Ross Conley, Carey's husband and Laurel's father, died by suicide in 2014. Cole Conley, Ross and Carey's son, took his own life in 2017.

Cole Conley was a manager at 12 News. He golfed with Mark Curtis and other enthusiasts in the newsroom. He was the least likely person you could imagine to be dealing with this struggle.

Carey and Laurel wrote this book to share how they rebuilt their world with a new vision of hope.

Carey doesn't like to say she "lost" her husband or her son because she says she feels like they are more with her now, even though they are physically gone. Carey and Laurel felt they had a unique story to share with the world after losing two family members in three years.

Carey is an entrepreneur, dedicated to helping others find their clearly written and defined vision for themselves.

"Keep Looking Up, Transforming Grief into Hope after Tragedy" is available for purchase on Amazon. Carey also authored "Vision is Victory: Where Hopes and Dreams Become Action and Achievement" about finding your assignment to achieve in life.

The National Suicide Prevention Hotline is 1-800-273-8255. You can use this number if you are in distress for free confidential support. You can also use it for prevention and crisis resources for you or your loved ones.

12 News created the Cactus Coalition to solve some of Arizona's biggest problems. To learn more, go to 12News.com/FactIs.