Bentley had visited Baylee Barradas back in May. Baylee's family says he went above and beyond during the final few days of her life. 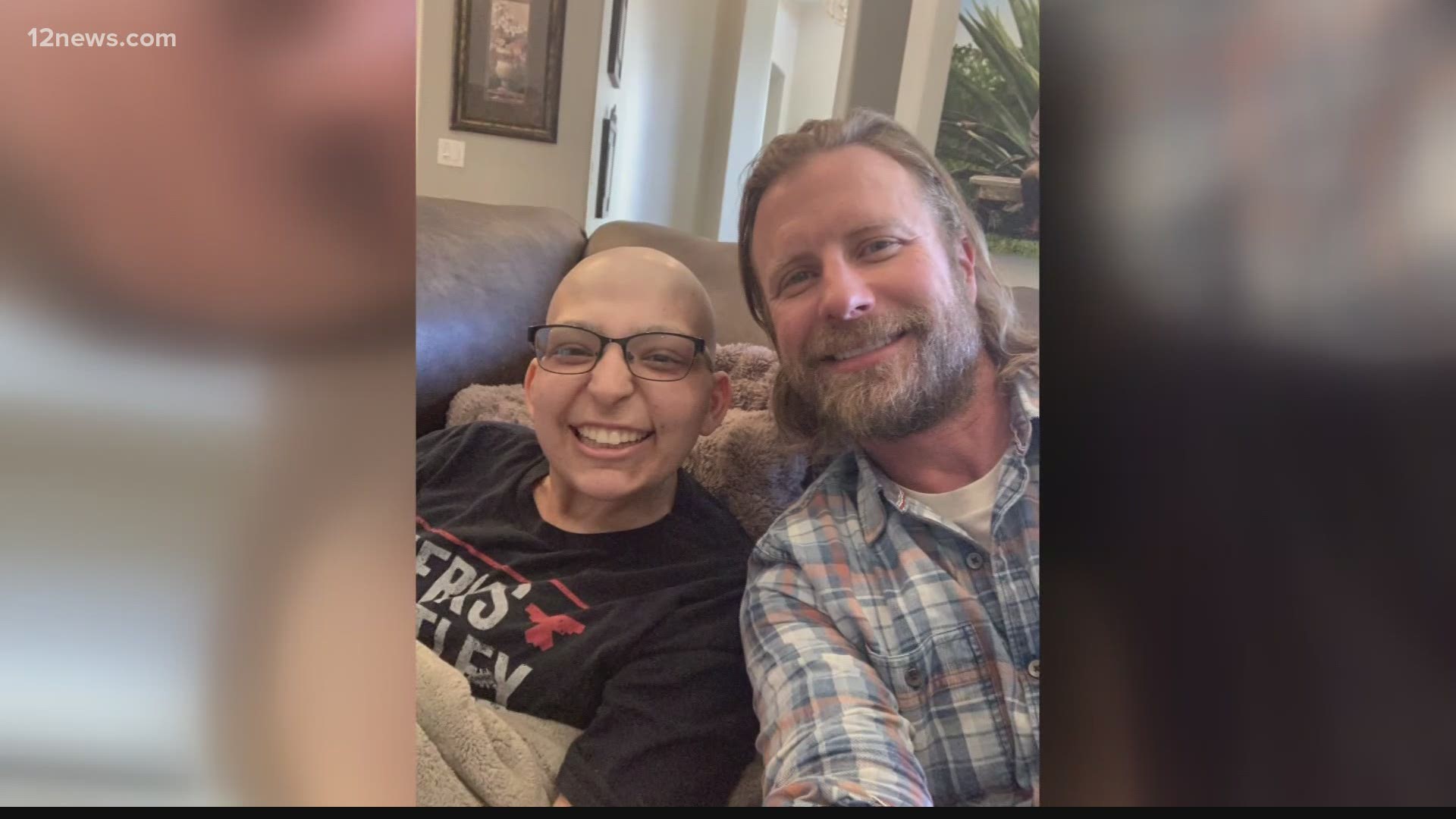 PHOENIX — It was a one-time stop to see Baylee Barradas that led to a life-long friend in country music star Dierks Bentley.

Now, Baylee’s parents consider Bentley a part of their family.

Baylee died Sunday after battling sarcoma, a type of cancer. The cancer was believed to be caused by neurofibromatosis 1, or NF. It’s an incurable genetic disorder that she’s had since she was born.

However, a tumor was found on her leg in December. Tumors that are cancerous, like what Baylee experienced only impact a small percentage of people, according to Mayo Clinic.

“I really felt called to be there,” Bentley said.

Bentley, a Valley native, had stopped by to play for Baylee in May.

She wore a shirt bearing Bentley’s name, as he sang to her in her living room.

“It was just an incredible experience,” Baylee said at the time.

Ryan and Tyra Barradas, Baylee’s parents, say that was just the beginning of Bentley’s involvement in their lives.

They said Bentley would often check in on Baylee and the family. He even recruited country music artists Luke Byran, Kelsea Ballerini, Tyler Hubbard, Cole Swindell and Thomas Rhett to record videos of encouragement for her in the last few weeks.

Since Bentley’s last visit in May, Baylee declined, staying in the hospital before being released to go home where she was put on hospice. 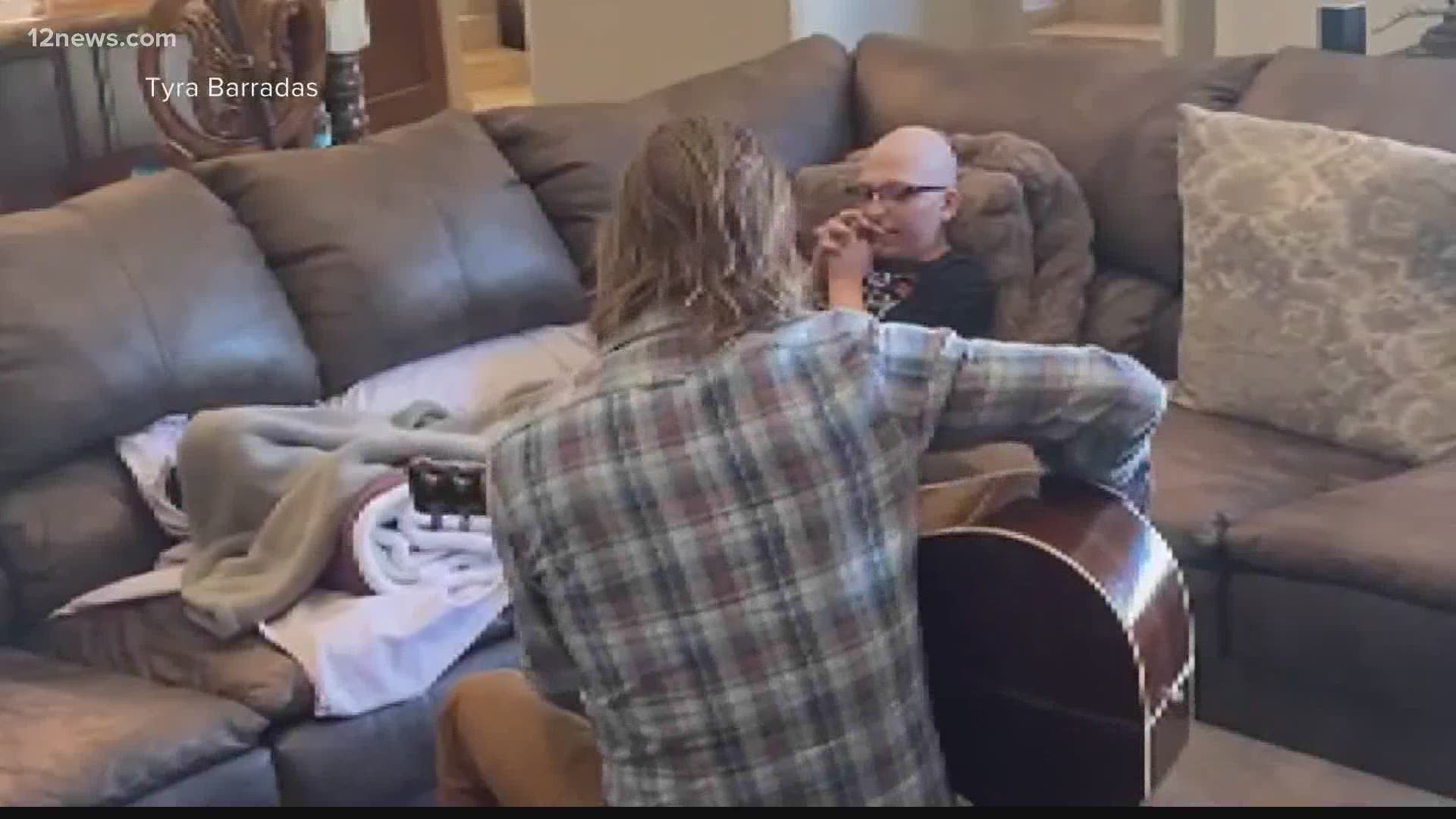 Bentley made a trip to the Valley where Ryan and Tyra said he spent several hours with the family over Baylee’s final three days.

"Some people run into the fire and some people run away from it,” Ryan said. “And he absolutely was all in not just with her, but with us and our whole family.”

Baylee was a fighter, not only through cancer but throughout her life.

Baylee has had other symptoms of NF over her life, including cafe au lait spots, scoliosis and learning disabilities.

Her family says the learning disabilities from NF made it tough to get to graduation from Pima Medical Institute.

But Baylee made it, she was given the “Tenacity Award” by her instructors at PMI.

Tyra remembers her daughter as a person who loved everyone, with a great sense of humor, even though the darkest valleys of fighting cancer.

“Even in the worst of times her sense of humor just comes out of nowhere and makes you laugh at a time you think you couldn't possibly laugh,” Tyra said.

Bentley said it was her smile and witty humor that will stick with him.

“I kept delaying my flight so I could stick around a little bit longer and I'm thankful I did because whatever impact I had on her and her family it's 10 fold the impact she's had on me,” Bentley said.

Tyra, Ryan and Bentley all shared a story from his visit where Baylee hadn’t been responsive for some time.

But when Bentley went to leave, she stirred, and he walked over to be right in front of her.

“Miraculously her eyes just popped wide open,” Ryan said.
“It was unbelievable,” Bentley said. “And I was like, “You know I love you, right?’”

Over the course of the three days, they said Bentley immersed himself in the final moments of Baylee’s life through visiting, being present and singing too.

“Who does that? Who invests themselves that much into - it's just absolutely, truly remarkable,” Ryan said.

“My song ‘I Hold On’ will forever in my mind be Baylee's song,” Bentley said. “Because that was the song we all sang together by her bed, the whole family everybody holding on to her."