A series of accidents Monday night into early Tuesday morning left Interstate 40 shut down in both directions and stranded hundreds of drivers for up to 12 hours. 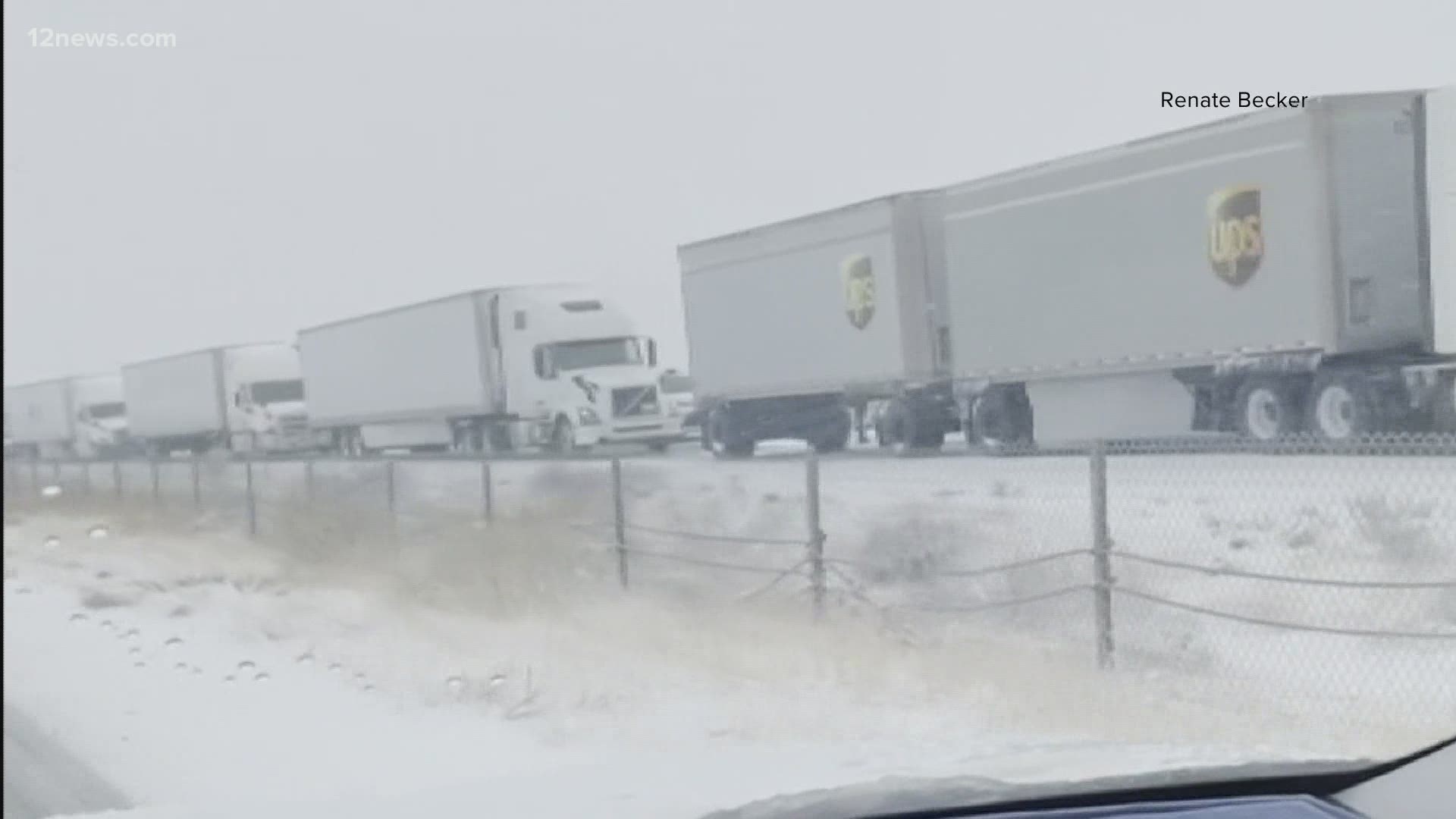 KINGMAN, Ariz. — A series of accidents Monday night into early Tuesday morning left Interstate 40 shut down in both directions and stranded hundreds of drivers for up to 12 hours.

The most impactful of the two accidents happened in the westbound lanes of I-40 near Ashfork around 2 a.m., when two tractor-trailer trucks collided on the interstate, backing up traffic past the Kingman exit ramps.

“I would say I was actually stuck on the road for at least eight hours straight,” said Renate Bucker, a Kingman resident who works in Lake Havasu City.

Bucker was on her way home Monday night oblivious to the mess that was ahead of her.

“None of those maps services were showing that there were any problems in the GPS or anything like that,” Bucker said. “They were all saying the roads were clear, light traffic.”

According to her GPS, she was .08 miles from her exit ramp when traffic stopped.

“I left at 10 o'clock at night from Pilot [gas station in Lake Havasu City] and I got home at 10 o'clock in the morning.” She said.

Greg Wadzinski was another driver caught up in the traffic jam. Moving from Florida to Oregon, Wadzinski decided to visit the Grand Canyon on his trip west.

Wadzinski had been posting his westward journey on Instagram.

“Update: I am stuck in a snowstorm outside of the Grand Canyon.” He told his followers. Later adding from his car: “I guess I’ll be staying here tonight?”

Arizona Department of Public Safety, who patrol Arizona Interstates and highways, said the wreckage from the two big rigs gave them no other option than to close the interstate and wait on heavy-duty tow trucks to arrive to move the trucks.

With the number of weather-related accidents around the state Monday, trucks didn’t arrive until Tuesday morning. This was information that Becker would have like to have known while she waited and checked social media for updates.

As bad as the traffic backup was, DPS says there were only minor injuries in a few of the accidents along I-40.

One of our NWS Phoenix COOP Observers up in Globe...Mike Magoon has reported 3.5 inches of snow so far...and it is still snowing at this hour. Here are some great photos of the snow from him...thanks Mike! #azwx pic.twitter.com/mCseMTLrTk