This calculation shows Monsoon 2020 was the driest ever in the Valley. Here's what that means

The Phoenix Rainfall Index shows that the Valley collectively had it's driest Monsoon on record, by far. 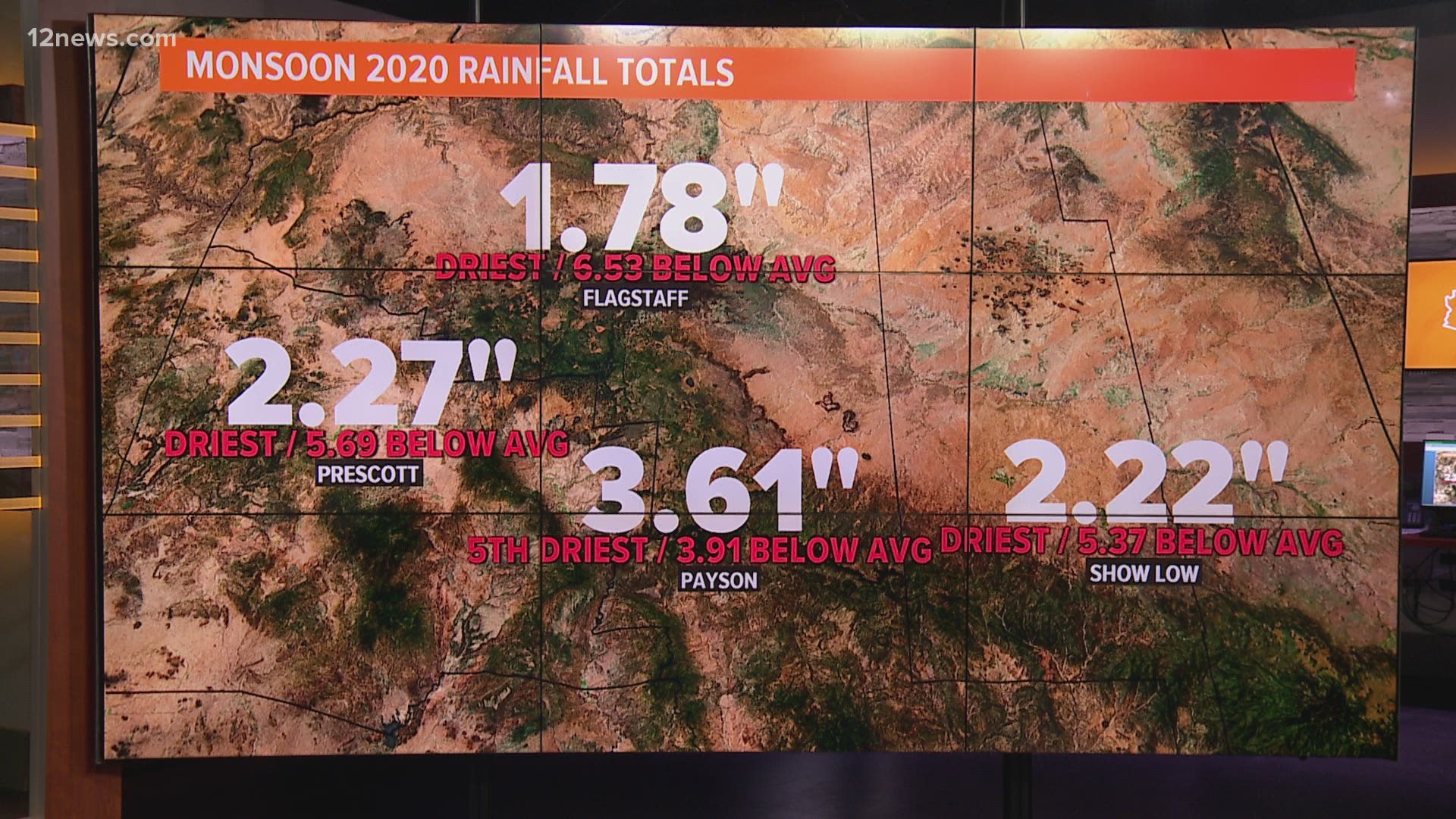 PHOENIX — In 2019, we called it the “nonsoon” when the Valley and the state of Arizona saw a drier than normal Monsoon season. So, what do we call the 2020 Monsoon, which quietly ended on Wednesday?

Not only did Arizonans statewide suffer through the hottest summer in recorded state history, especially in Phoenix where we saw the most 110-degree days and 115-degree days ever in a year, but there was also hardly any rain.

In fact, when looking at one key metric from the National Weather Service, it shows that this was the driest Monsoon that the Valley has seen since the data started being collected in 1990.

Phoenix Sky Harbor Airport is where the official measuring station for Phoenix rainfall is located and it’s received an inch of rain during this Monsoon season, which is not near the top of the driest on record. However, the Phoenix Rainfall Index shows that the Valley collectively had its driest Monsoon by far.

According to the National Weather Service, the average value for rainfall across the Valley during Monsoon season was 0.46 inches.

The Phoenix Rainfall Index takes the average rainfall for all rain gauges across the Valley.

Recapping weather in summer of 2020

The first measurable rain of the Monsoon didn't come in Phoenix until July 24.

The most rainfall of the season came on Aug. 20, when .90 inches were calculated at Phoenix Sky Harbor.

We did see some storms in the Valley but they were few and far between.

Not only was there very little rain, but Phoenix also experienced the most 110-degree days and most 115-degree days in a year in history as well as more than 20 daily heat records.

While the Phoenix Rainfall Index showed drier than normal Monsoon seasons in the Valley in back-to-back years, Rogers says it's too early to determine if there is a long-term trend coming here.

"Obviously back-to-back summers with below-normal rain is not anything anybody wants to see, we’ll take any rain we can get around here," Rogers said.
"The longer-term trends for temperature have shown an upward increase each summer, especially with the low temperatures, those have really come up a lot in recent decades."

Additionally, that 110-degree type heat is not only happening more often but over a longer period of the year.

"One thing that we’ve actually noticed is that the heat season is actually expanding, so maybe like 50 years ago or so, that heat season might be confined more to May through September, but now it starts earlier and ends later and that seems to be another trend we’re seeing," Rogers said.

So, what does this mean?

So we had unprecedented heat, mixed with maybe the driest Monsoon season, collectively, ever in the state, what are the consequences of that?

Rogers says that with these conditions, the drought monitor has now classified at least 90% of Arizona is in severe or extreme drought.

Rogers explained that while last year's Monsoon season was dry, the Valley had a fairly wet winter and spring, which brought Arizona out of severe drought conditions. But impending conditions show that the winter and spring might not bail the state out this time.

"One concerning thing is that we’re looking like we’re going to go into a La Niña this cool season into the spring and that usually means warmer and drier conditions than normal as well," Rogers said.

La Niña is a Pacific Ocean weather pattern that occurs every three to five years, and La Niña winters tend to favor warm and dry conditions in the southern tier of the U.S.

Are other regions experiencing this dryness?

Rogers says most of the moisture during the Monsoon comes up into northwest Mexico first and then expands into southwest Arizona. That really didn’t happen this year.

"In other down years sometimes we’ve seen that moisture come up toward the international border and then not really make it into Arizona," Rogers said. "But, this year, it seemed like that moisture didn’t even make it into Mexico. So if you look on a regional or a bigger scale view, really the whole region was just remarkably dry for this year."

Conversely, if you look a the Gulf of Mexico and the Atlantic Ocean, there was an active year of hurricanes and above normal rainfall there. Rogers says it's hard to say if there's a direct connection.

"There's connections everywhere on the continent and even around the world where it’ll be really wet some places and really dry other places and it looks like it was our turn to be really dry this year, unfortunately," Rogers said.

Maybe some hope for October?

Occasionally in Octobers, Arizona can reap the benefits of a tropical system or a decaying hurricane off the coast of Mexico.

This happened in 2018 with Hurricane Rosa.

While Rogers says there's no sign of this happening yet, it's still possible and would go a long way toward our drought conditions.

"The chances aren’t very great but these are things that we’re keeping an eye on just in case we get a lucky surprise and bump those rainfall totals up," Rogers said.