After an active morning and afternoon caused flooding north and east of Phoenix, thunderstorms re-emerged out west and moved toward the Valley Monday evening. 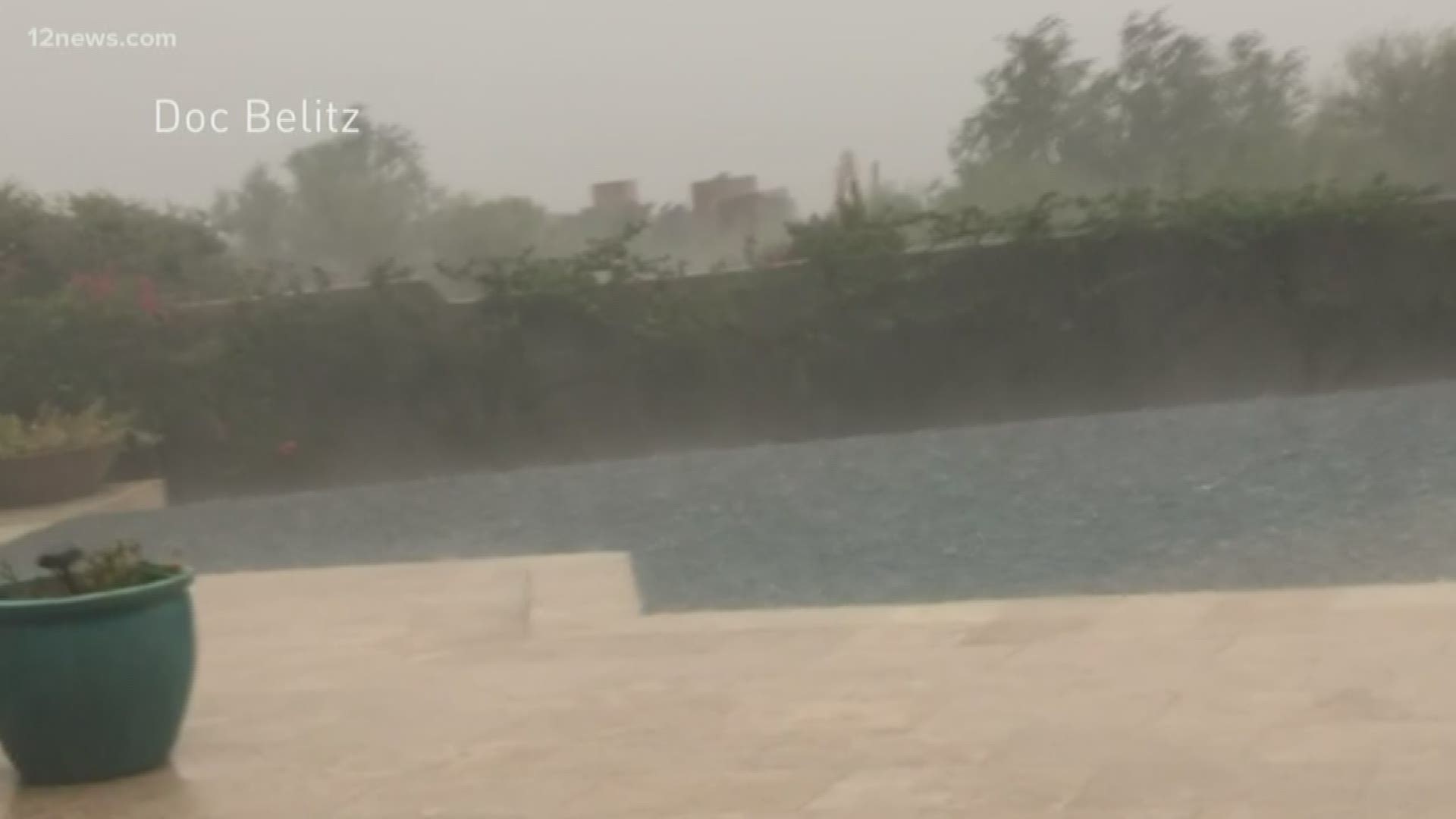 Heavy rain was already falling in areas, especially east of Phoenix, early in the morning Monday.

After an active morning and afternoon caused flooding north and east of Phoenix, thunderstorms re-emerged out west and moved toward the Valley Monday evening—hitting Valley residents with a second round of flooding, lightning and hail.

Below, check out photos and video of rain and flooding around the Valley from viewers and Sky 12.

A line of storms extending back to Yuma is moving northeast, keeping thunderstorm chances alive through the overnight. The west Valley is already seeing a few light to moderate storms.

Not everyone in the Valley should see rain overnight, but spotty activity is expected. Flash flooding will be the greatest threat through the morning hours.

An Arizona Department of Transportation camera shows a lot of water on the 7th Street exit near the Deck Park Tunnel on eastbound Interstate 10.

If you see a flooded roadway, avoid driving through the water.

APS and SRP outage maps showed more than 8,000 people were without power in the Phoenix area as multiple flash flood warnings were in effect throughout the state. Most of the outages were expected to be fixed around 8:30. The latest estimated restoration time shown was shortly before 11 p.m.

A flash flood warning for Glendale, Avondale and Goodyear is in effect until 11 p.m.

A flash flood warning including Tonopah is in effect until 12:15 a.m.

Phoenix fire crews landed a helicopter to rescue two teenagers who were stranded on an island created by floodwaters. Firefighters said the boys were on high ground and not in distress.

Quarter-sized hail and up to 60 mph winds are possible as a severe thunderstorm warning is in effect for Fountain Hills and Rio Verde until 6:15 p.m.

The strongest storms in the Phoenix area are over the west Valley. The storms are expected to drop heavy rain over Litchfield Park, Surprise, Peoria, Glendale and Deer Valley through the next hour.

The downtown Phoenix area could get some light shower activity during that timeframe, but nothing severe.

This second round of storms is moving toward Cave Creek, where storms hit hard earlier in the day.

A severe thunderstorm warning is in effect until 5:30 as a strong storm cell moves over Buckeye moving northeast. The storm could produce wind gusts up to 60 mph.

Storms developing out west are moving east, so we can expect to see more storm activity around Phoenix in the evening and later tonight. NWS Phoenix said strong winds and localized flooding are possible with these storms.

A Dysart school bus with 18 students on board was trapped during a flash flood between two washes on 163rd Avenue near Wildcat Drive in the west Valley. The students and driver were safe as they waited for the floodwaters to subside.

Firefighters eventually brought the students and the driver out of the bus and across the wash on a high-clearance fire truck.

There's blowing dust in the west Valley. Visibility is down to zero in some areas. A dust storm warning is in effect until 2:45 p.m.

A significant weather advisory for Maricopa County has been extended to 2:30 p.m.

A flash flood warning until 5 p.m. in the north Valley

The tornado warning for the north Valley has expired.

The tornado warning in the north Valley continues.

A tornado warning has been issued for Cave Creek, Carefree and Camp Creek.

There are strong storms across the north Valley near the I-17 near Anthem.

A flash flood warning has been issued for Anthem, New River and Wittmann until 4 p.m.

A Significant Weather Advisory is in place for Eastern La Paz and Maricopa Counties until 12:45 p.m.

A flash flood warning has been issued for Tempe until 5:30 p.m.

The threat of hail, flash flooding, winds, and isolated tornadoes for south-central Arizona is extreme and widespread throughout the rest of the day.

NWS Phoenix says isolated showers are "favoring the West Valley and northern areas." There could be a little hail too.

"The atmosphere is very unstable, as you can probably tell. Even a little shower will have the potential for producing small hail," NWS Phoenix tweeted.

A severe thunderstorm watch has been issued for an area of Arizona covering Phoenix and the surrounding areas, Yuma, Prescott Valley, Lake Havasu City and Bullhead City until 8 p.m.

Rainfall totals from the last 24 hours show areas east of Phoenix near Tortilla Flat received more than three inches, and at least one area with more than 4 inches, of rain.

Mesa PD says northbound Crimson is closed between Baseline and Southern due to flooding.

"AJUSD is open for school today. The buses are running late, but they are coming."

NWS Phoenix says storms and showers are slowly leaving the Valley, but stronger ones are expected to develop later in the day.

Those strong storms were already popping up in southeast California and southwest Arizona.

A flash flood warning was issued for Black Canyon City until 12:15 p.m.

ADOT says SR 88 has been reopened at milepost 199.

A significant weather advisory has been issued for Yavapai County until 8:45 a.m.

The flash flood warning for Apache Junction and Gold Canyon was extended to 12:30 p.m.

A flash flood warning was issued for Fountain Hills until 12:15 p.m.

The Apache Junction Police Department says the city is experiencing severe flooding in many areas with "numerous vehicles stranded."

"If possible, stay off the roadways until the flooding subsides," the department tweeted. More than a dozen road closures are in effect in Apache Junction, according to the department.

NWS Phoenix says showers are "slowly" moving out of the Valley. Severe storm are still possible in Phoenix this afternoon and evening.

ADOT says northbound SR 88 is closed north of Apache Junction at milepost 199 due to flooding.

NWS Phoenix says the heaviest stuff is currently falling north and east of the Valley.

"This is just the beginning of what is expected to be a very active day," NWS Phoenix tweeted.

Team 12's Krystle Henderson explains why this storm is not your "typical monsoon setup."

Areas and roads in Apache Junction are flooded by heavy rainfall. The AJ Police Department says residents should "take caution throughout the city."

The flash flood warning continues for the city until 9:45 a.m.

The National Weather Service in Flagstaff says three inches of rain is possible for areas in northern Arizona with a rainfall rate of 1 inch per hour.

ADOT said the exit ramp and three right lanes were blocked due to flooding on US-60 EB at Val Vista. The lanes were clear a few minutes later.

There are some spotty showers out west this morning, according to NWS Phoenix, but the heaviest stuff is falling in the East Valley.

A flash flood warning through 10:30 a.m. has been issued for areas in the East Valley, including Mesa, Chandler, Gilbert and Tempe.

A flash flood warning is in effect for Maricopa County until 10 a.m.

The rain began falling overnight in the Valley. A flash flood warning was issued for Tortilla Flat early Monday.

The storm action, according to the NWS Phoenix, is expected between 5 a.m. Monday and 5 a.m. Tuesday. A map shared by NWS Phoenix shows the East Valley might be the most impacted area.

Shows and thunderstorms are expected to be hit or miss throughout the day. Phoenix measured 0.01 inches of rain by 5:30 a.m. 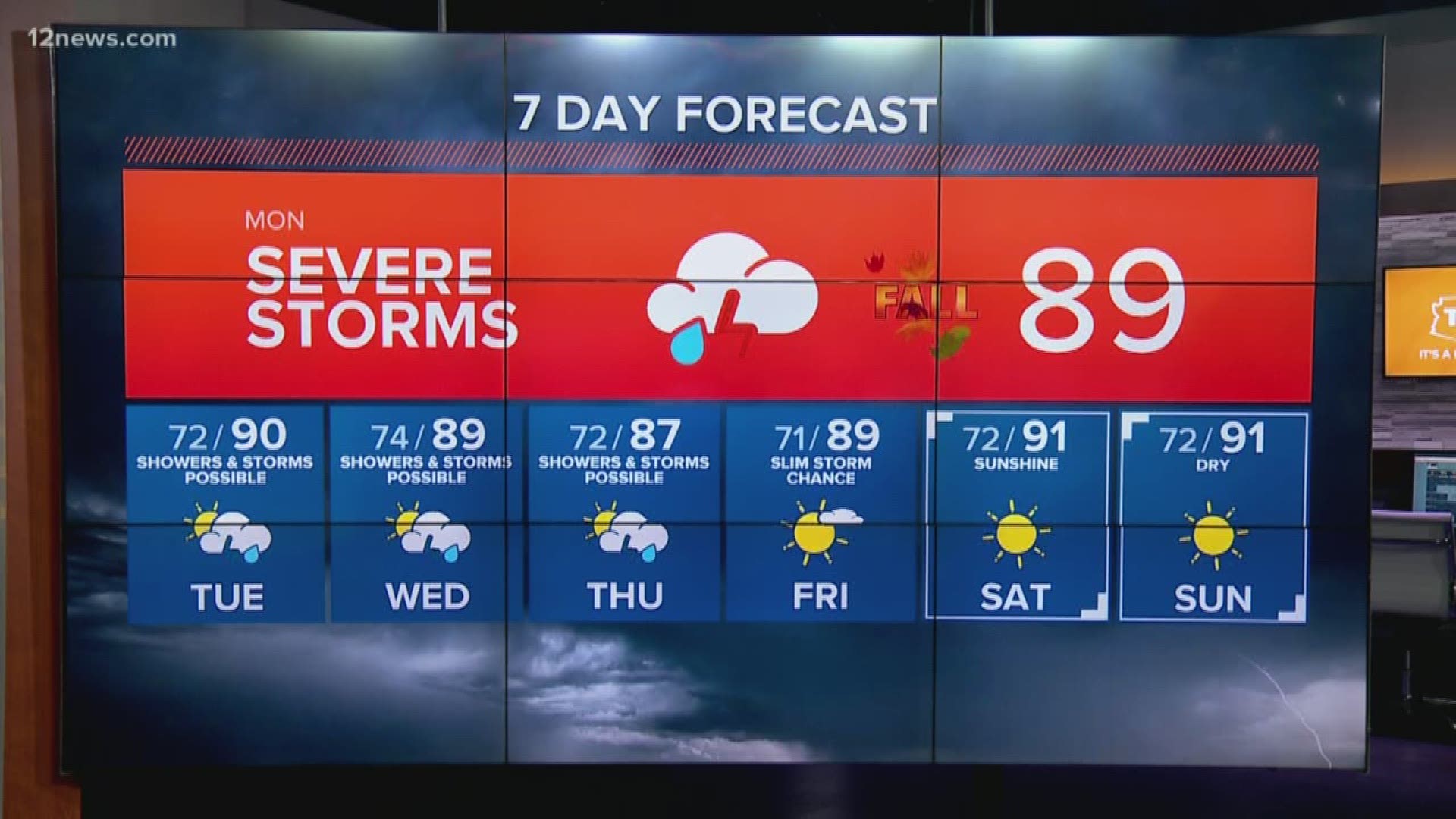 Flash flooding, damaging winds, large hail, and lightning are the major storm threats Monday throughout Arizona. There's even a minor threat for a tornado.

A flash flood watch is in effect for Pinal County and is expected to be expanded to encompass most of southeast Arizona through Tuesday night, according to NWS Tucson.