At least four hikers were struck by lightning at the Grand Canyon on Tuesday. Now, experts are sharing safety tips to remember during monsoon season. 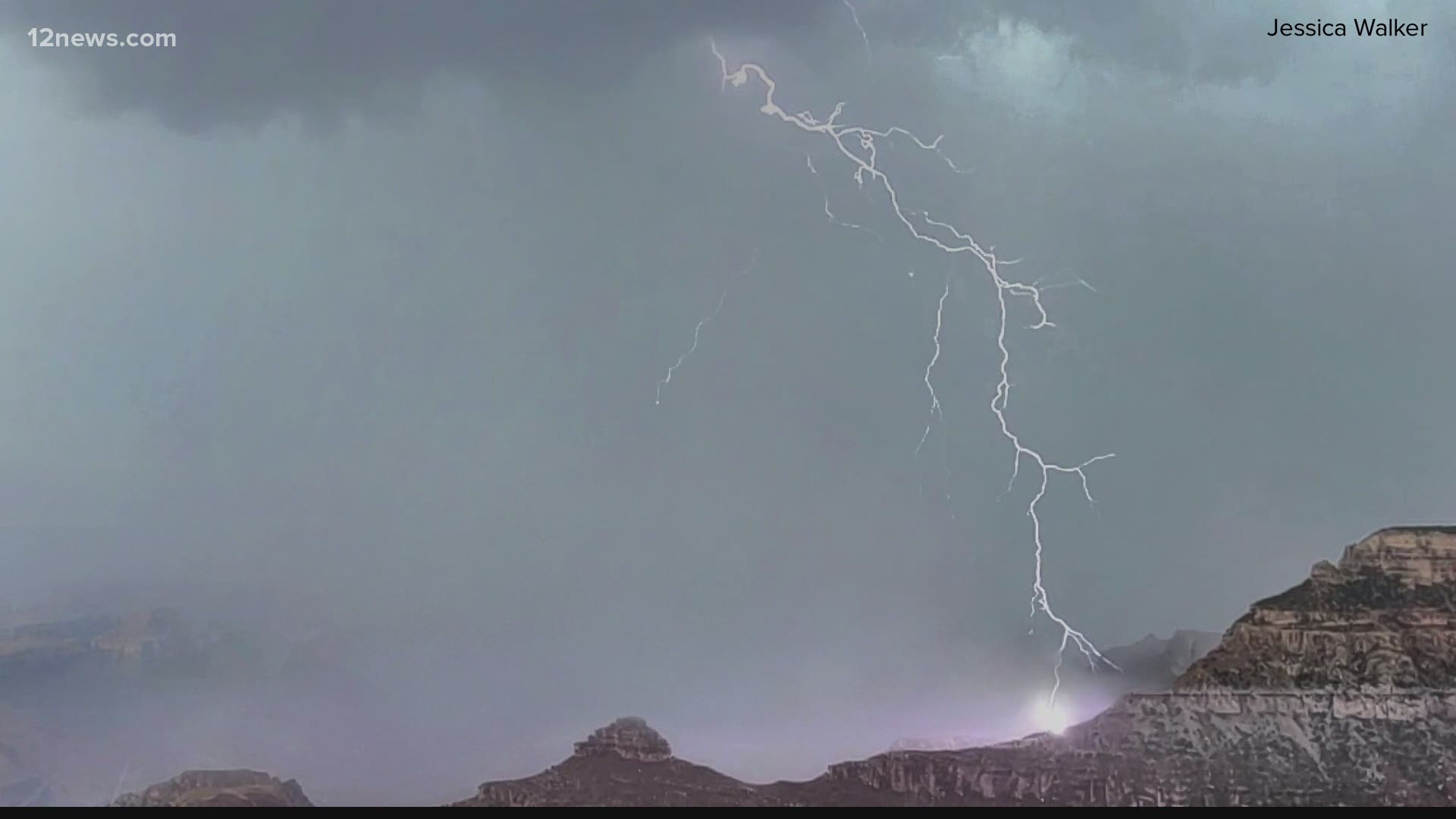 PHOENIX — At least four hikers were struck by lightning at the Grand Canyon on Tuesday after being caught in a monsoonal thunderstorm.

Two of them, a 30-year-old man and a 28-year-old woman, were taken to a hospital in Flagstaff. The female hiker was initially found unresponsive but has since regained consciousness, according to a spokesperson from the Grand Canyon National Park. Officials say they had been hiking at the Bright Angel Trailhead.

“The storm came in very quickly and it only just started to rain when that lightning struck the rim," said Kaitlyn Thomas, a public affairs specialist with the Grand Canyon National Park.

Video captured by Jessica Walker shows the conditions at the South Rim of the Grand Canyon on Tuesday.

Experts say when heading out during monsoon season, which runs from June to September, you should always know where the nearest shelter is. This could be anything from a vehicle to a bathroom or visitor center. Keep your eyes on the sky so you can see a storm coming, giving you enough time to retreat to a safe place.

2.  Spread out from other people

If getting to shelter isn't an option, be sure to spread out from other people.

If you are forced to face a storm with thunder and lightning while outside, experts encourage you to crouch onto the balls of your feet with your heels touching, head down and hands covering your ears. You should keep your hands away from the ground and avoid lying completely flat.

If you are hiking near an edge like the edge of the Grand Canyon, be sure to move away from it during a storm.

5. Stay away from danger areas

If you are caught in a storm, you should do your best to avoid open areas, rocky outcrops, lone trees, the tallest trees, poles, railings and standing water.

According to the National Park Service, in order to calculate just how close you are to lightning, count the seconds between a flash and a bang of thunder. Divide the number of seconds by five to figure out a rough estimate of the distance in miles from you to the lightning strike location.

In 2015, Corey Melker was struck by lightning when hiking with a group of friends along the Mogollon Rim. They were experienced hikers and had backpacked in the area countless times.

Melker fought off excruciating pain and seizures for hours to survive. Sadly, his friend, Christine Garcia, didn't make it.

Melker recounted the day that changed his life forever.

Arizona has seen its fair share of severe weather. Here is a compilation of videos from various storms across the Grand Canyon state from our 12 News YouTube playlist.