The coverage of storms will be highest from Thursday through Saturday, 12 News Meteorologist Lindsay Riley said. 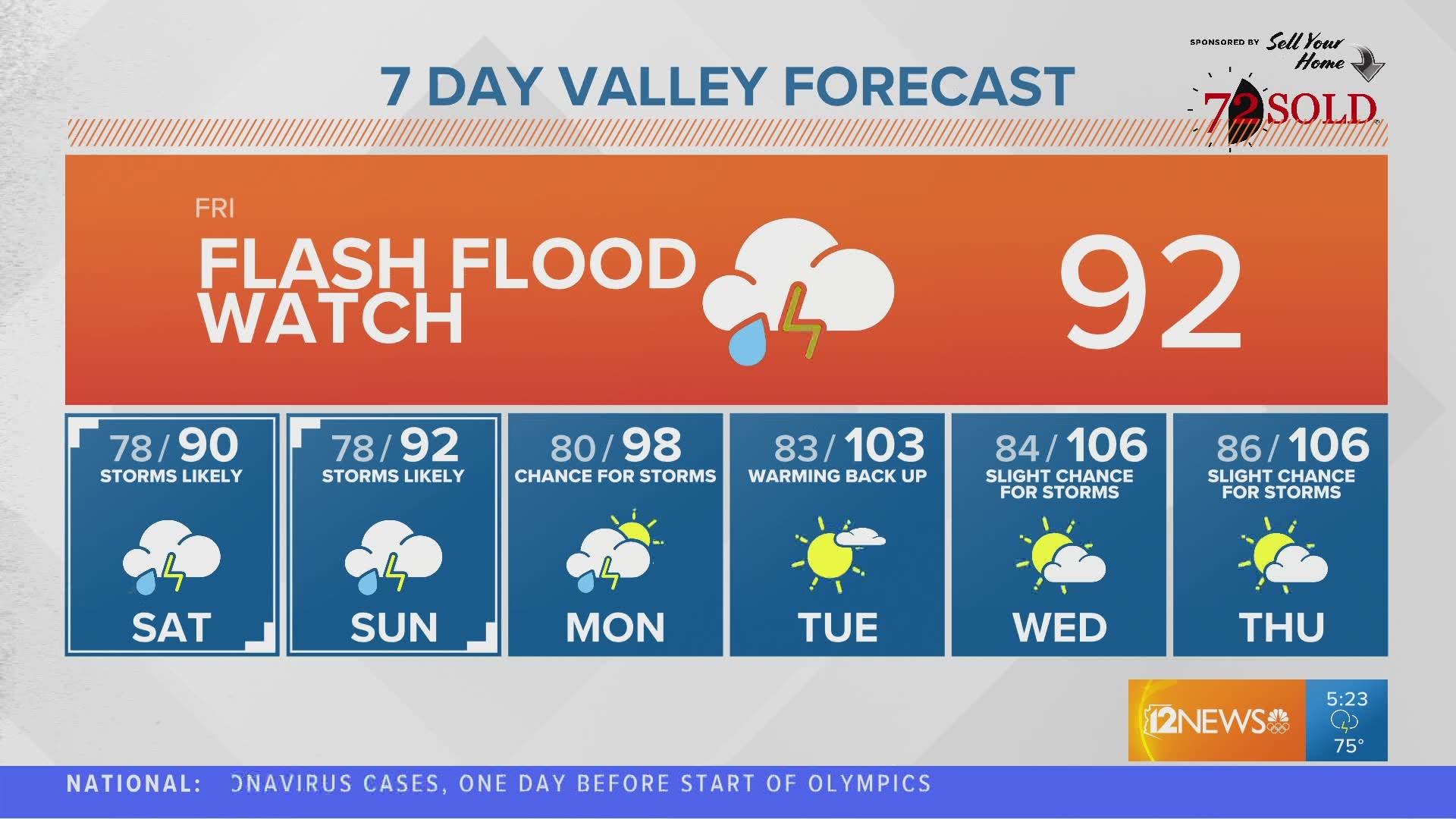 ARIZONA, USA — Editor's note: The video above is from a newscast on June 29.

Weather hazards could include lightning, strong outflow winds, dust storms and heavy rainfall, all of which could lead to flash flooding. Wildfire scars would be the most vulnerable during flash flooding.

12 News will provide updates on the weather here.

The high for Friday was just 83 degrees.

Another interesting thing is the afternoon temp (5 pm) temp at Sky Harbor of 76 degrees...which was 2 degrees cooler than the afternoon high so far at Fairbanks AK! #azwx #akwx pic.twitter.com/th89MrU9Pg

4:50 PM MST Radar Update: Rain is continuing to fall north of the Phoenix metro. The main threat continues to be flash flooding. Remember, if you encounter a flooded roadway, turn around don’t drown! #azwx pic.twitter.com/owFBPKawqL

Crews were called to a water rescue near Central and Fig Springs roads in New River.

People were reportedly trapped inside of a mobile home that had water coming in the windows and the trailer was possibly going to flip over.

Two people had to be airlifted from the trailer by the Maricopa County Sheriff's Office. They were not hurt.

RECORD BROKEN! Phoenix broke the daily rainfall record for July 23 and the rain is still falling. The previous record was 0.41'' in 2002.

Record broken! Add a + to that total because it's still raining and more storms are expected throughout the rest of the day. #phoenix #az #azwx #12newswx #monsoon2021 @12news pic.twitter.com/4hSQDuq7NO

Pima County officials announced temporary closures of several trailheads and recreation areas in the Santa Catalina Mountains and numerous sections of the Chuck Huckelberry Loop due to flooding.

The closures will remain in place until further notice.

The City of Scottsdale closed a number of roads and facilities due to flooding and downed trees from rainfall moving through the area.

Crews are working to restore power, clean up debris and ensure safety across the city in the wake of last night’s storm.

Power outages were reported Friday morning in Old Town and South Scottsdale, which are slowly being restored.

Closures include roads and low-lying areas crossing the Indian Bend Wash, a seven-mile flood control greenbelt that runs through the heart of Scottsdale. Drivers should obey traffic signs and should not cross running water or flooded areas. Current closures and other flood-prone streets include:

The railroad park is closed due to downed trees. This closure will last through the weekend.

Crews are working to restore power, clean up debris and ensure safety across the city in the wake of last night’s storm. All of the washes in the city are closed until further notice due to high water levels. (1/3) pic.twitter.com/ymdNgfOXti

Road closures are in place in Navajo County after flooding happened overnight. The areas affected include White Mountain Lakes, Linden, Lakeside and Heber.

A flooded road warning is on Bourdon Ranch Road near Hatchery. It is passable but drivers need to go slow.

The National Weather Service has issued a flood warning for Scottsdale until 3:45 p.m. Friday afternoon.

"Flooding is ongoing or expected to begin shortly in the warned area," NWS said in a post on its website. "Between 0.5 and 1 inch of rain has fallen."

The service said trying to cross low water should be avoided and additional rises in washes are expected due to ongoing rainfall.

The I-17 underpass at Greenway looks to be close to being reopened after crews drained the water from the area.

Crews are making progress in draining the water from the I-17 underpass at Greenway. They'll be out there working on it until it the road can reopen.#PhxTraffic pic.twitter.com/kViSo9MIIz

Due to flooding from the rain 7th Avenue northbound and southbound lanes between Greenway Parkway and Coral Gables Drive are closed. Officials recommend drivers avoid flooded areas and not try to drive on flooded roads.

The Arizona Department of Transportation said a semi-truck was crashed in the left lane on I-10 westbound to I-17 northbound at the split.

12 News Viewer Denise Toscano took a photo of the truck as she was riding in a car under the overpass. 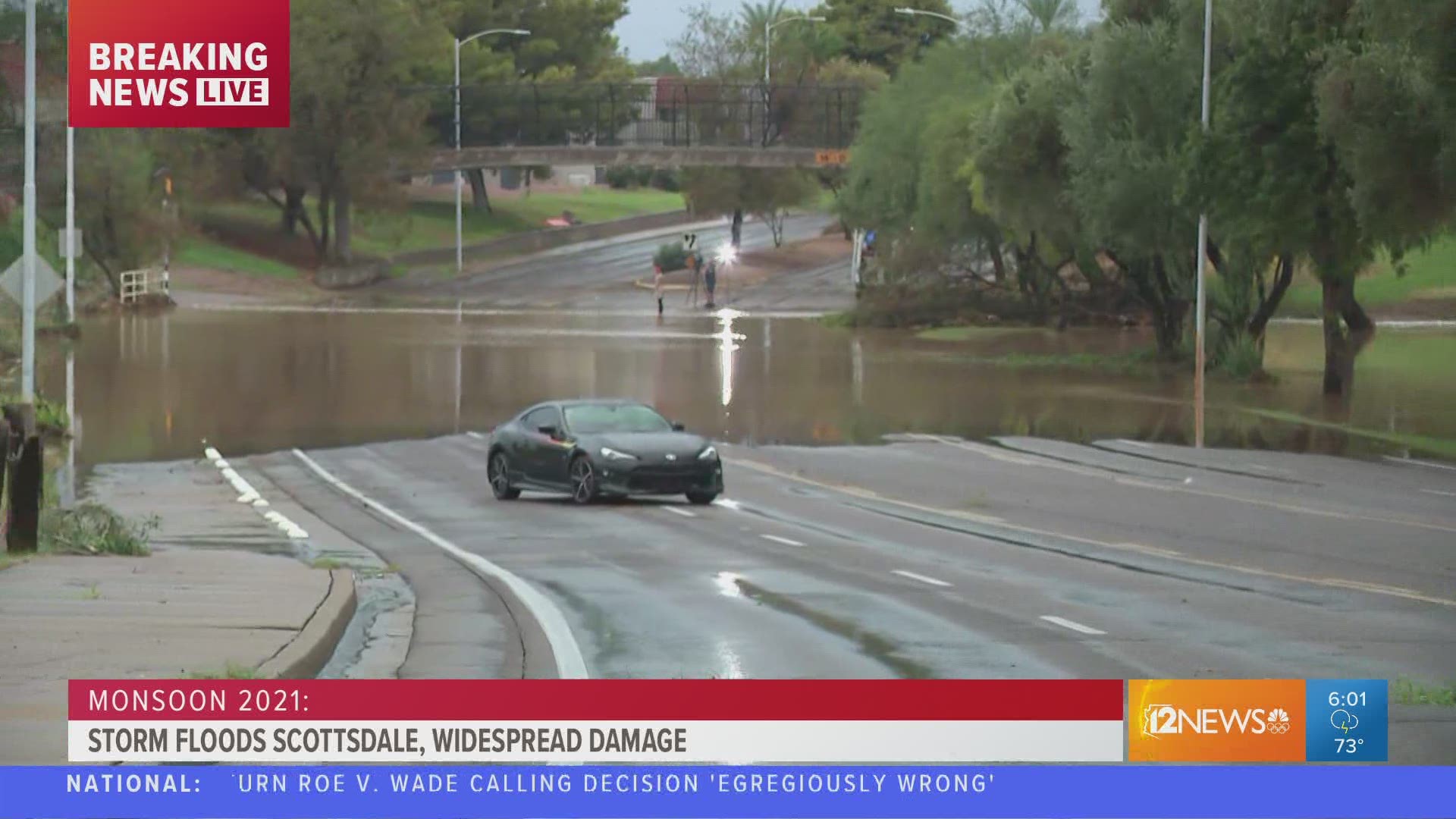 The National Weather Service at Phoenix also advised drivers to be careful on the roadways as storms continue to push through towards the Valley.

7:50 AM Update: Showers and thunderstorms continue to push through eastern parts of the Phoenix metro this morning. The main impacts will be locally heavy rain and lightning. Make sure to take it slow on the wet roadways. #azwx pic.twitter.com/gvWXhOAYiw

Another viewer named Amy sent in a video of sideways rain in northwest Tempe. She said her power had been out since 9:30 p.m. 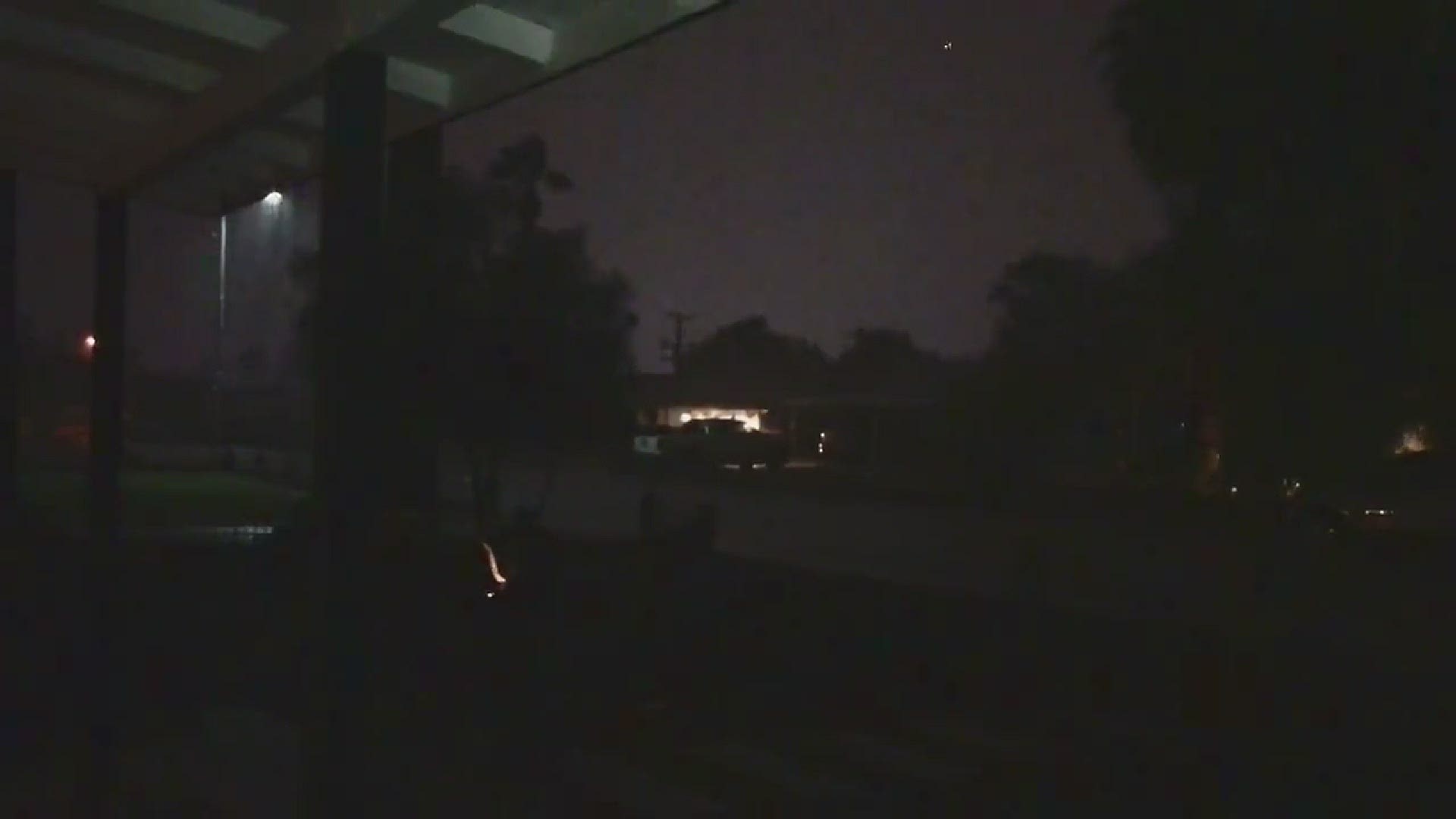 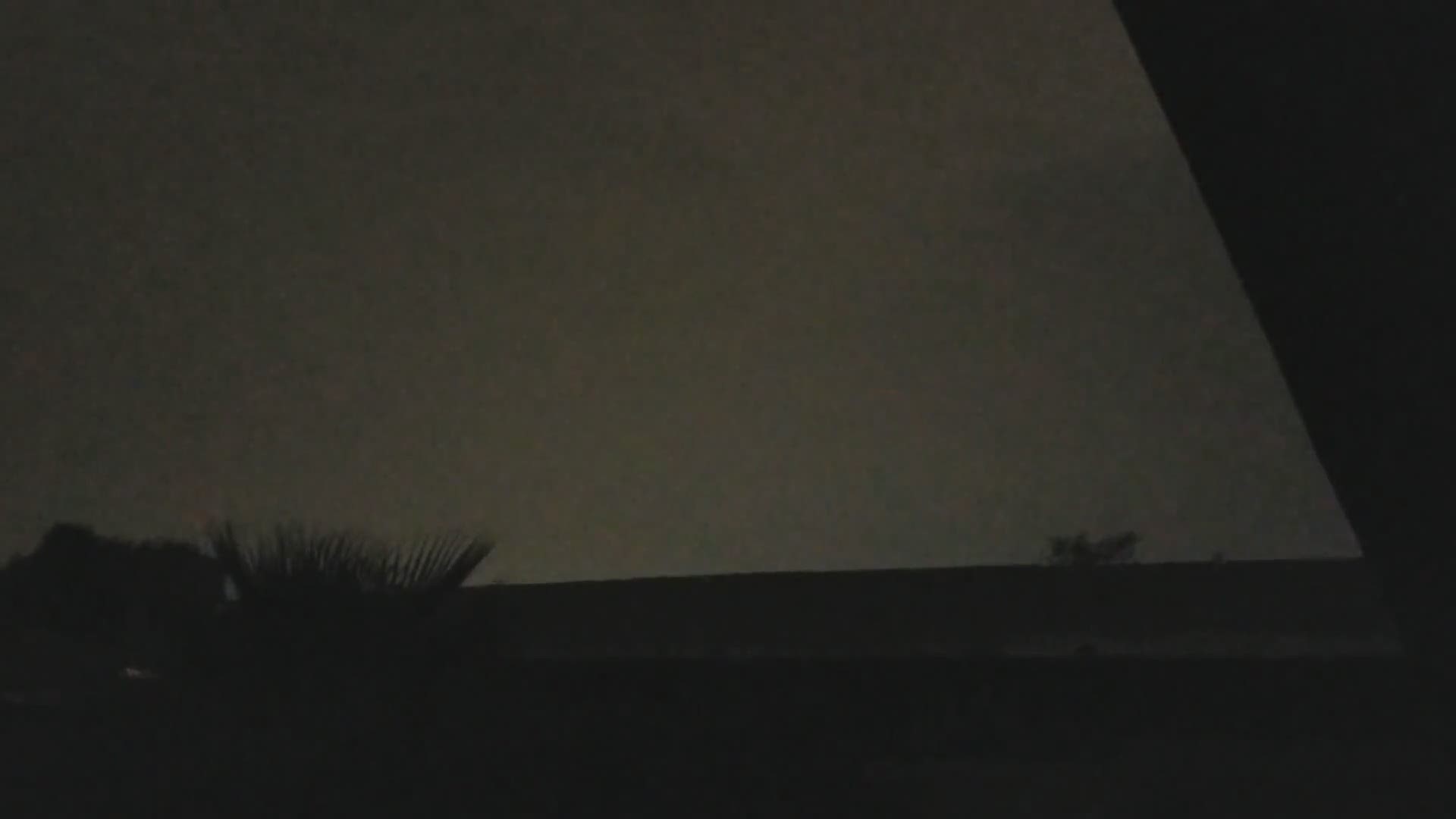 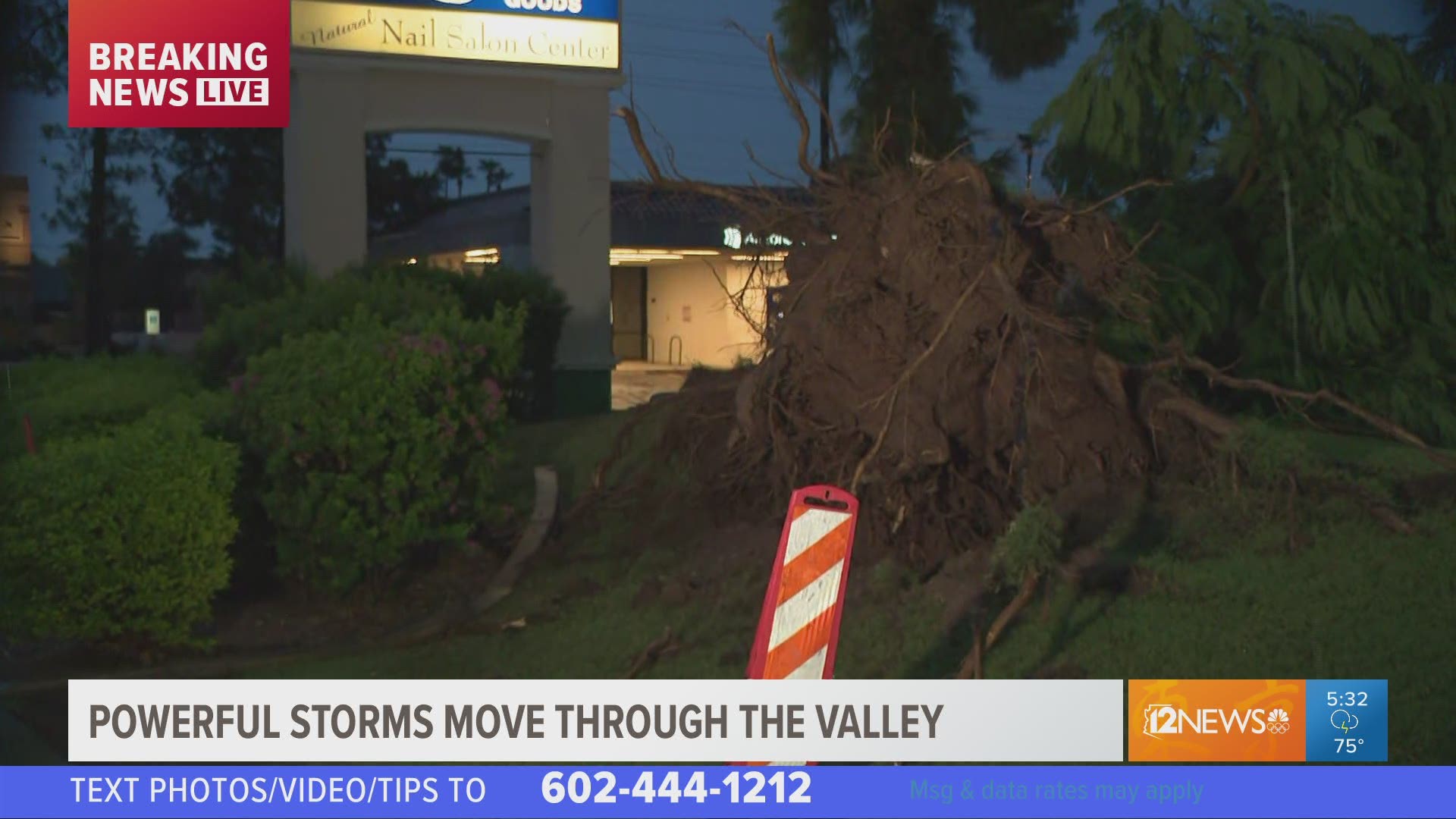 There are 8,283 APS customers and 13,001 SRP customers throughout the Valley without power due to tonight's storms.

A flash flood warning is in place for Mesa, Chandler and Gilbert until 1:45 p.m.

A flash flood warning has been issued for Phoenix, Scottsdale and Paradise Valley until 1 a.m.

A severe thunderstorm warning has been put in place for Maricopa County until 8:45 p.m.

Storms are set to hit Arizona late Thursday afternoon or early evening and could turn severe with damaging winds expected to hit up to 60 mph.

A flash flood watch is in effect for a majority of Arizona from Thursday afternoon through Saturday night. Other storm hazards will include lightning, damaging winds, dust storm and hail.

Some areas in the Valley are expected to reach multiple inches in several spots.

The National Weather Service is sharing updates on the storm forecasts as well.

Quite a bit of lightning around the region yesterday. These are in-cloud flashes recorded from the afternoon through overnight. After a bit of a break early today, look for more storms & lightning this evening and Friday. #azwx pic.twitter.com/5Xx9YFF508

A severe thunderstorm warning has been issued for Phoenix, Scottsdale and Paradise Valley until 11:00 p.m.

A significant weather warning has been extended for Maricopa County. Residents should look out for high winds and hail.

We will continue to track the incoming storms and share all the latest information on our website, mobile app, streaming services and 12 News broadcasts.

Arizona has seen its fair share of severe weather. Here is a compilation of videos from various storms across the Grand Canyon state on our 12 News YouTube playlist.