A State of Emergency has been declared by Gov. Ducey in Gila Bend after fast-moving floodwaters destroyed parts of the town. 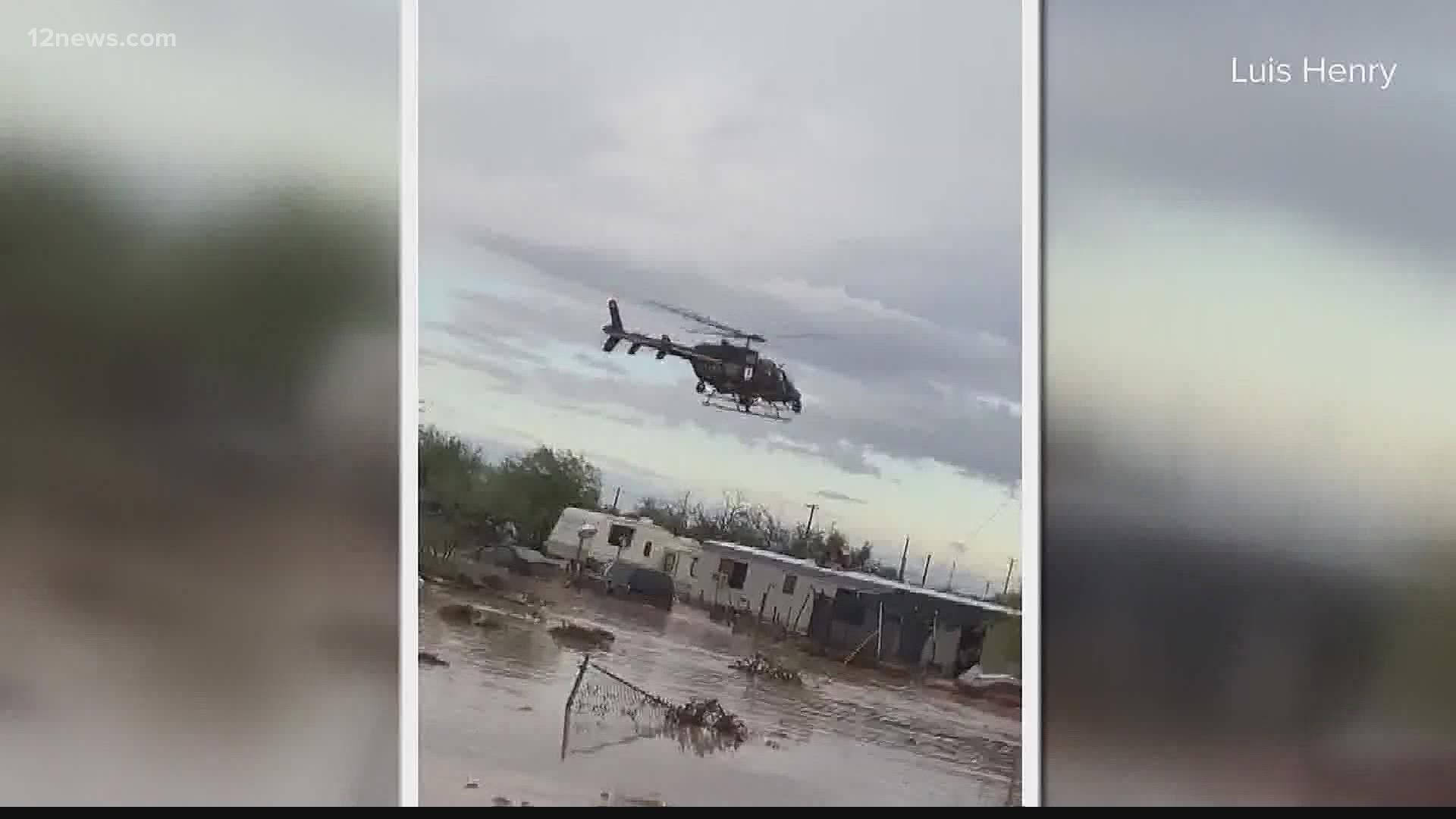 It was around 2:30 a.m. when first responders began receiving reports of people stuck on the roofs of their homes and vehicles, as gushing floodwaters hit the area.

Fire Captain Fred Burkhardt was on duty that night.

He and two other firefighters were dispatched to the south side of town, just across the railroad tracks where water was quickly rising and inundating homes.

As the trio made their way across town, a standstill freight train stopped them on their tracks that forced them to climb a container to get to stranded residents.

“There were several people yelling for help,” Burkhardt said he heard as they jumped across the train. “At some points we were neck-deep in water, tippytoeing at times, bumping into cars that were completely submerged, just couldn’t see them that they were there.”

As the water rose and gushed through the streets, everything on its path was destroyed, including power poles.

During the beginning hours of the later categorized state of emergency, the three volunteer firefighters were the only ones attending and responding to rescue calls. Even battling hazards like live electrical wires.

“For the longest time it was just the three of us going through homes, getting shocked, getting people off their roofs,” Burkhardt said. “The fear and devastation in people’s eyes is what really struck us.”

Hours into the morning, help arrived from nearby towns and state agencies. Helicopters began to hoist families to safe areas. Fire Chief Arelia Henry was at a nearby location receiving rescued families.

She was on duty, two weeks into the job, helping others as her own home flooded.

“My husband initially thought we had a leak,” Henry said. “He walked out of the room and when he opened this door, more water rushed in.”

From the front door to the back door, her home of 13 years was filled with mud and water rising to her waist.

She spent all day assisting her community, it wasn’t until later in the evening that she came home and saw the damage to her own home for herself.

“It was devastation. Just to see my furniture floating out, my clothes floating out and even my children’s back bags, it broke my heart,” Henry said.

Governor Dough Ducey assessed the damaged Friday morning after announcing $200,000 in relief money for those affected. Businesses can qualify for a grant of up to $10,000.

The state set up a website for all the resources available.

Mayor Chris Riggs said they expect clean-up efforts to take months, but for residents, the tragedy will be forever engraved in their memory.

“The panic in their faces and their shock, I close my eyes at night, and I see that it’s what’s really gotten to me,” Henry said.

Gila Bend has a total of 28 volunteer firefighters. 20 of them showed up to help, as others were tied up with their respective jobs, Burkhardt said.

“I hope in my lifetime we never see this happening again,” he added.