The above-average temperatures we are experiencing may continue through the summer months, with the drought expanding and worsening in northern Arizona.

ARIZONA, USA — Monsoon 2020 is right around the corner!

You may be wondering if this year will be a repeat of the “non-soon 2019” or if we’ll see more storms this year.

Climatological patterns like El Nino, La Nina, an active hurricane season, Arctic Oscillation, and the North Atlantic Oscillation can help meteorologists predict whether certain parts of the globe will trend hotter or colder or wetter or drier than normal on a given year.  We can sum up the first six months of the year with above-average precipitation during the winter and hotter than normal temperatures in the spring.

But can these climate patterns that we’ve seen in 2020 help predict if this year's monsoon will be stormy or not?

After looking back over 124 years of monsoon data, the short answer is El Nino, La Nina and active Pacific hurricane years are the strongest predictors to determine what kind of monsoon year we’ll see in Arizona.

Does having a wet winter mean we’ll have a wetter monsoon?

In the top 10 wettest monsoons since 1896 Phoenix saw anywhere from 5.99” to 9.56” of rainfall. The average monsoon rainfall is 2.71”.  There was no correlation between those wet monsoon seasons and how those winters looked.  The winter months ranged from extremely dry in 1984 and 2014 to very wet in 1955. We saw 3.47” of rain between January and March which is above average however that statistic alone, can not help us determine how this monsoon season will look.

Here are some specific fast facts from our hot spring:

Can hot spring temperatures translate into a stormier monsoon season?

What type of monsoon season do we typically see when there is a strong El Nino or La Nina present?

El Nino is classified as the warming of the ocean water off the coast of Peru and Ecuador. This warming has a global impact on the weather for the year! Not only does El Nino generate above-average rainfall for Arizona during the winter, but there is a STRONG correlation to above average monsoonal rain on strong El Nino years as well.  1926, 1958, 1966, 1972, 1982, 1992, 1998, 2014, 2015 were all STRONG El Nino years and each of those monsoon seasons featured above-average precipitation. An average monsoon season produces 2.71” of rain.

Does the Atlantic or Pacific hurricane seasons impact our monsoon in Arizona?

Two of our strongest predictors for determining our monsoon are El Nino and La Nina. Sea temperatures are neutral off of the South American coast and there is a 55% chance that this will persist through the summer. As a result, these two climate factors cannot be used in predicting how monsoon 2020 will look.

Years where we saw wet winters and hot springs did not give a strong correlation to a wet vs dry monsoon.

Based on reviewing data from the last 124 years and comparing that to years with wet winters and hot springs, my prediction is for the above-average temperatures to continue through the summer months and the drought to expand and worsen in northern Arizona.

It will also be an active fire season due to the abundance of fuel on the ground after our wet winter. There is not a strong correlation to years with wet winters and hot springs to the amount of precipitation we see during the monsoon. Therefore, there is an equal chance of seeing above average versus below-average precipitation.

Since we are not in an El Nino or La Nina year, we lack strong predictors that would help us predict the amount of precipitation possible this monsoon season. 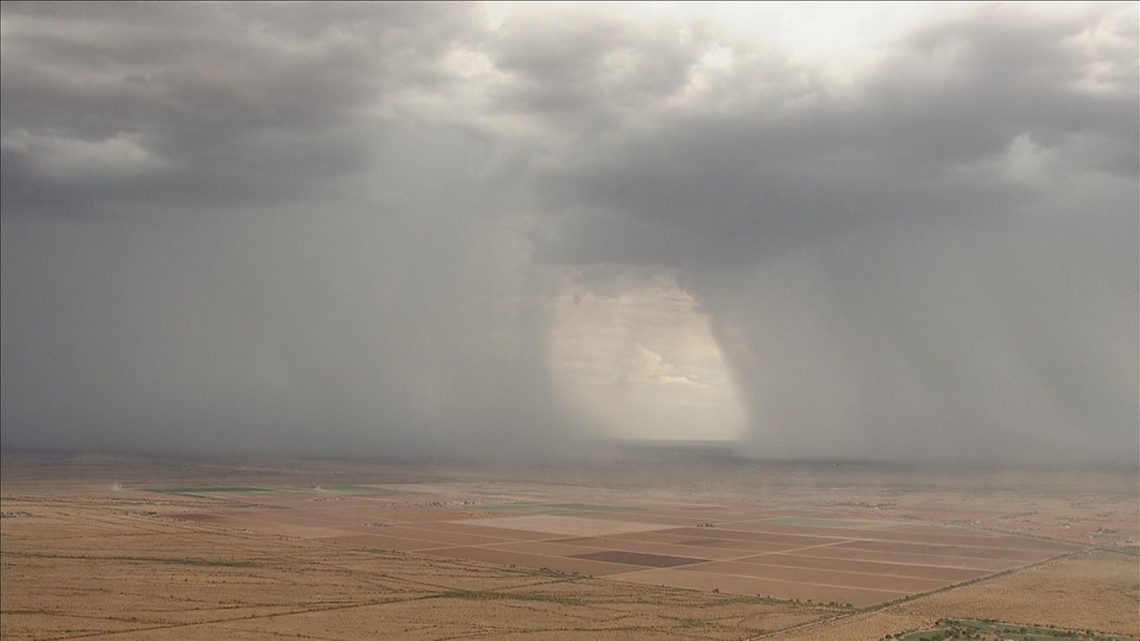 Here are some tips to driving safe in the storms
Storms can be intense when they hit the Valley. Here's what you can do if you're behind the wheel at that moment. PHOENIX - Editor's note: The above video is from a 2018 newscast. This story was originally published on Aug. 3, 2019 during the monsoon.