Stay with 12 News for updates on monsoon activity throughout the weekend. 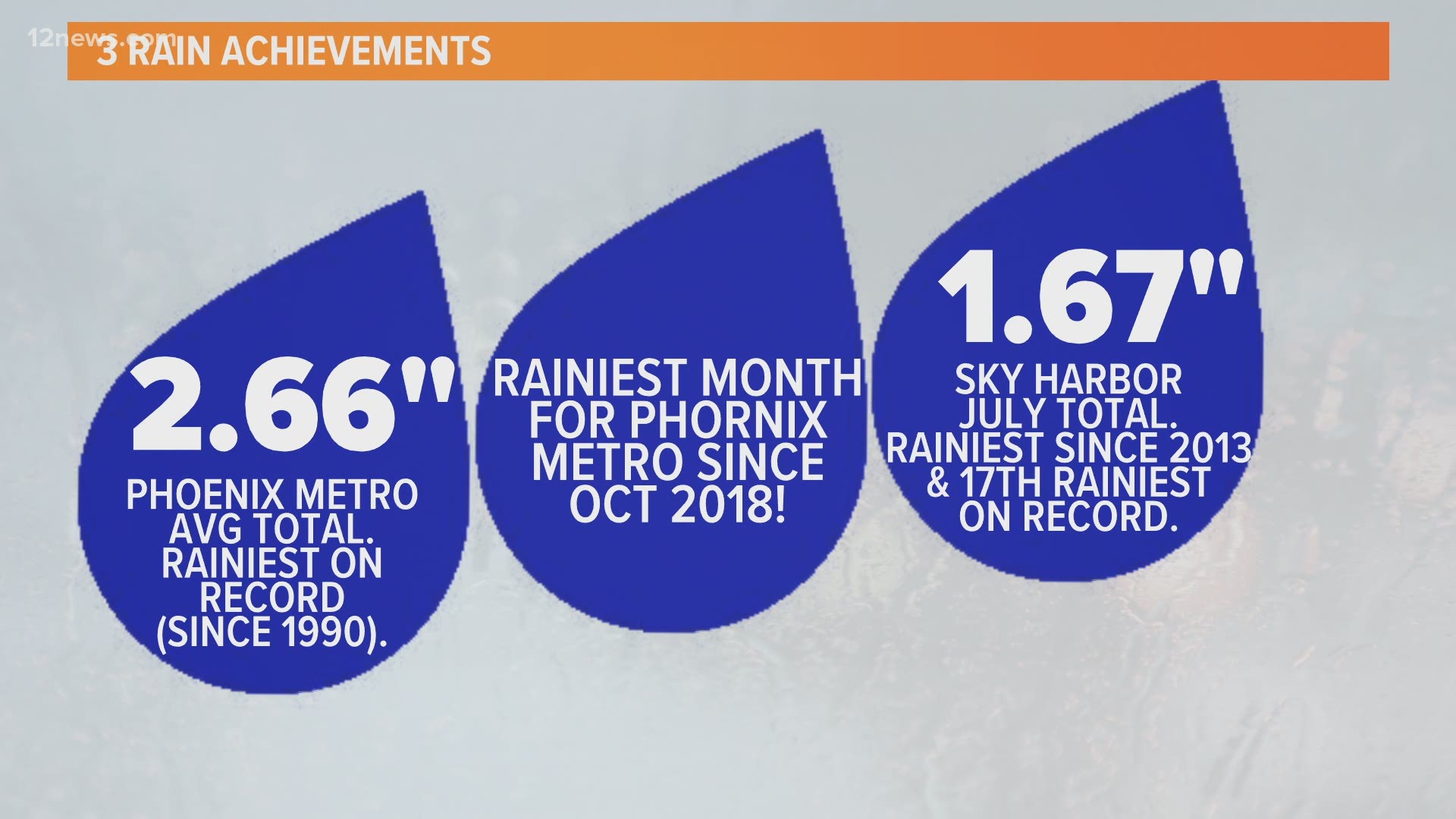 PHOENIX — Extreme monsoon activity was expected throughout the weekend as storms had the potential to produce heavy rainfall.

Weather hazards included lightning, strong outflow winds, dust storms and heavy rainfall, all of which potentially lead to flash flooding. Wildfire scars were of course the most vulnerable during flash flooding.

Here was a recap of the weather activity.

A flash flood warning has been extended for La Paz and Yuma counties until 9:15 p.m.

Flash flooding has closed Lower Sycamore until further notice. This video was was taken near Mesquite Wash. Please do not try to enter the area. Flash flood warnings have been issued by the National Weather Service. pic.twitter.com/WeWiO9oHGO

Avondale fire personnel were dispatched to conduct a rescue south of I-10 and Van Buren Street.

An adult male perched himself in a tree as the water was flowing past. Avondale Fire said they will conduct a helicopter rescue due to the conditions.

The man is reportedly alert and above the water level.

The National Weather Service has extended the flash flood warning for the Telegraph Burn Scar which includes Miami, Globe and Claypool until 4:15 p.m.

The National Weather Service issued a flash flood warning for Glendale Peoria and Surprise. The warning is in effect until 5:15 p.m.

The National Weather Service issued a flash flood warning for the Telegraph Burn Scar which includes Miami, Globe and Claypool.

Over the course of three hours, up to 2.5 inches of rain fell over the West Valley, including Goodyear, Litchfield Park, Surprise and Glendale. 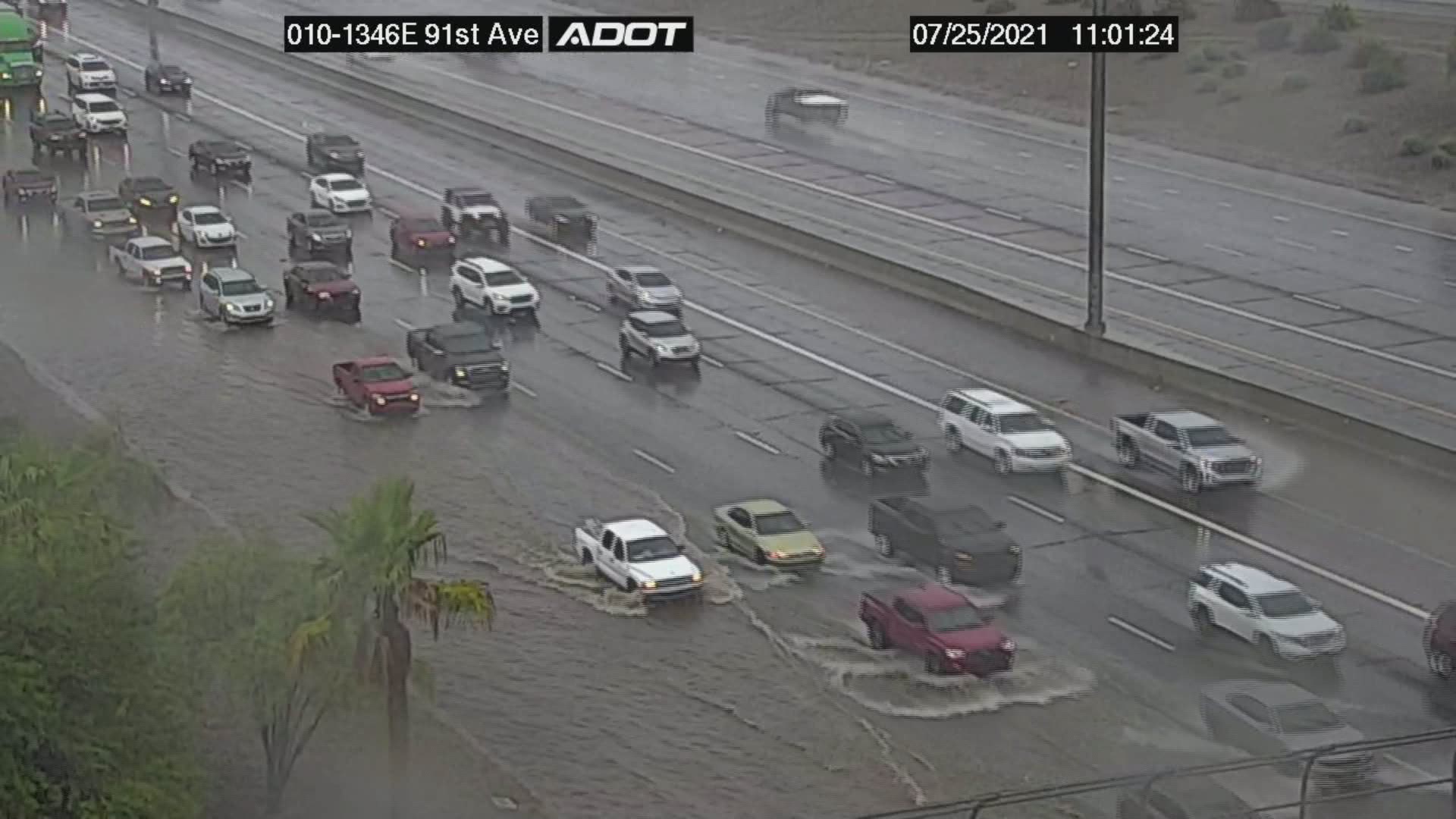 I-10 near 75th Avenue: Right and center lanes are closed for a large amount of water in the lanes.

Please slow down. If visibility is too low, #pullasidestayalive. Delay travel if you can.

A flash flood warning has been issued for Maricopa and Pinal Counties until 2:15 p.m. as"life-threatening" flash flooding is ongoing or expected to begin shortly, the National Weather Service said.

Up to 1.5 inches of rain have fallen across the counties and an additional one to two inches are predicted to fall, the NWS said.

Road closures due to weather in Surprise include Cactus Rd. westbound at Reems Rd.; Cactus Rd. eastbound at Greer Ranch Pkwy.; Cotton Ln. between Cactus Rd. and Peoria Ave.; and Auto Show Rd. from Cactus Rd. to the southernmost dealership in both directions.

Flooding is reported in Avondale, closing the area of 4th St. and Lower Buckeye Rd.

A flood advisory is issued for areas southeast of the Valley. The National Weather Service warns of running washes and flooding of low lying areas.

The L-101 off-ramp on the US 60 westbound near Dobson is closed with backed up traffic due to water on the ramp.

Check your route before you head out with the AZ511 and ADOT Alerts apps: https://t.co/MxTvyyEdpM #phxtraffic pic.twitter.com/HlBDisjWR3

The US 60 westbound off-ramp at Country Club Dr. in Mesa is restricted as ADOT works to reduce water in the road.

Cloud Rd. from 24th St. to 26th St. is also closed due to debris in the roadway.

A flash flood watch remains in effect through Sunday evening. The strongest storms will be capable of producing heavy rainfall and flash  flooding of washes, small streams, and poor drainage areas.

We will continue to track the incoming storms and share all the latest information on our website, mobile app, streaming services and 12 News broadcasts.