Lake Powell at record low levels due to drought

Lake Powell is at its lowest level since the dam was built, bringing it close to the level where the dam can't produce power. 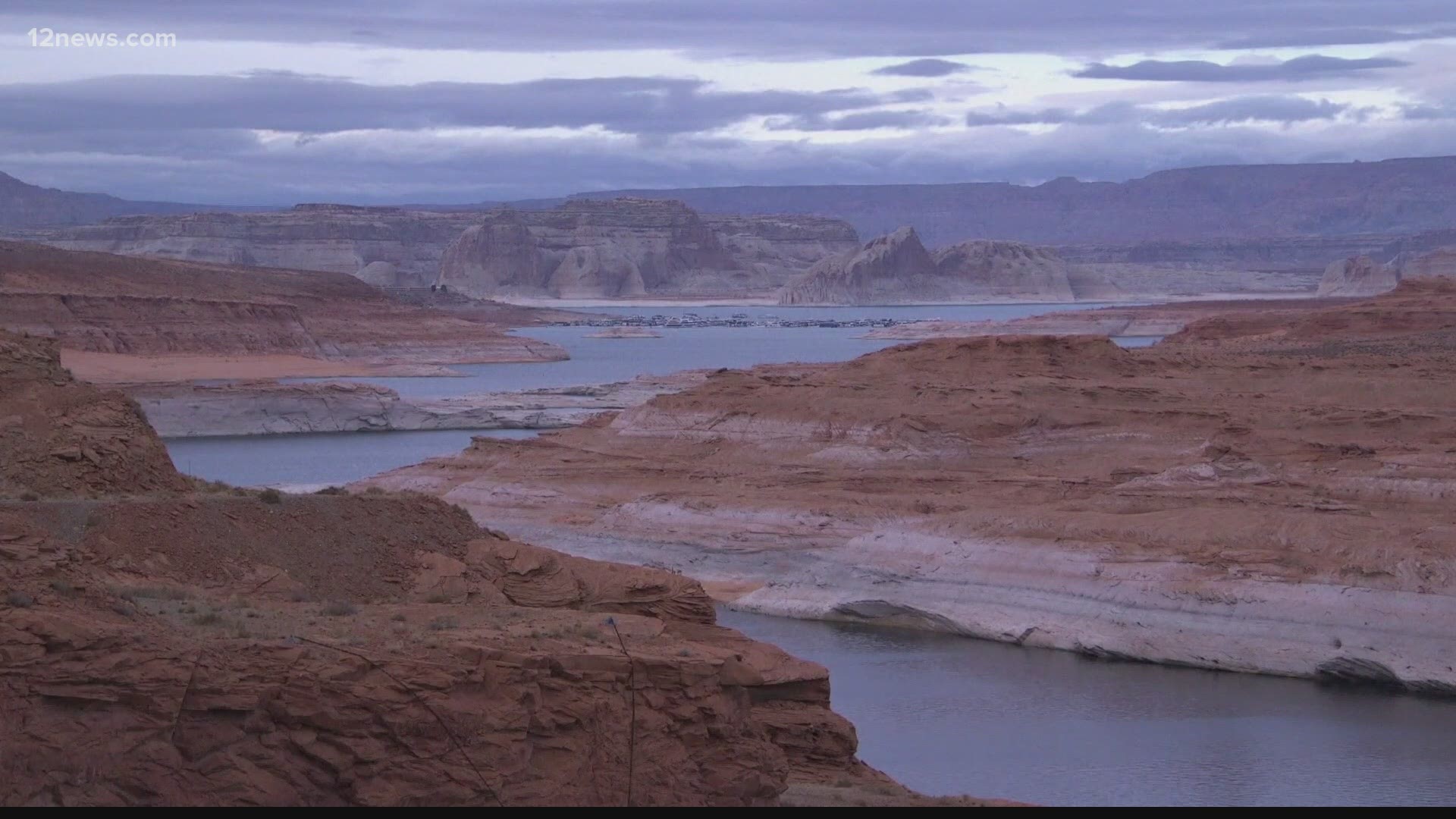 PAGE, Ariz. — The water level at Lake Powell has dropped to its lowest level since the lake was created in the 1960s, bringing it close to the critical level that will prevent Glen Canyon Dam from producing power.

The water level in Lake Powell has dropped about 50 feet in the past year due to the ongoing drought.

Bureau of Reclamation officials said Wednesday if the water level falls another 65 feet, Glen Canyon Dam will no longer be physically able to produce power.

Officials would prefer to keep a 35-foot buffer of water for safety. The lake is only 25 feet away from that minimum buffer level.

The dam is a hydroelectric power plant that takes water into the dam to turn turbines. Because there is less water in the dam, the turbines have been producing less than half the electricity they're capable of producing.

“We're very concerned about this," Lisa Meiman with the Western Area Power Administration said. "We have 130 power customers in seven states that take power from Glen Canyon Dam.”

The Western Area Power Administration sells the power produced at the dam to different power companies across the west. Approximately 5 million people rely on it for power, including Native American tribes and rural power companies.

But Meiman said it would be possible to make up the per loss with other hydroelectric dams in the system.

RELATED: Tucson is leading the nation in reclaimed water use

“We can borrow on other dams such as Flaming Gorge or Blue Mesa, Meiman said.

But, she acknowledged borrowing power from other sources is like operating on credit. It's not sustainable.

The problem is the low amount of snowfall in the Rocky Mountains, which means less runoff into the Colorado River and the reservoirs that much of the Southwest depends on for water and power.

The West is currently in a drought that has lasted for 22 years and shows no signs of lessening.

Arizona has cut its water usage to try and keep more water in Lake Mead and Lake Powell, but the drought has outpaced those conservation efforts.

"We had hoped that would buy us time," Arizona Department of Water Resources Director Tom Buschatzke said. "But things occurred more rapidly than we had hoped."

The Bureau of Reclamation is planning to release water from three reservoirs in the Upper Colorado River Basin and let it trickle down to Lake Powell.

They'll release 181,000 acre-feet of water or about one years' worth of water for 181,000 average families. But that much water will only raise the level of Lake Powell by three feet. The water won't be in the lake until December, officials said Wednesday.

They hope that three feet of extra water will help keep the lake above its minimum level through the winter when, hopefully, more snow will fall in the Rockies.

RELATED: Las Vegas wants to ban grassy areas nobody uses to save water