'I'm just glad we were there to help': Stranded people rescued from Sycamore Creek flood

An eight-year-old boy, his father, and another man were saved from rushing flash flood waters after their vehicle overturned in Sycamore Creek on Sunday. 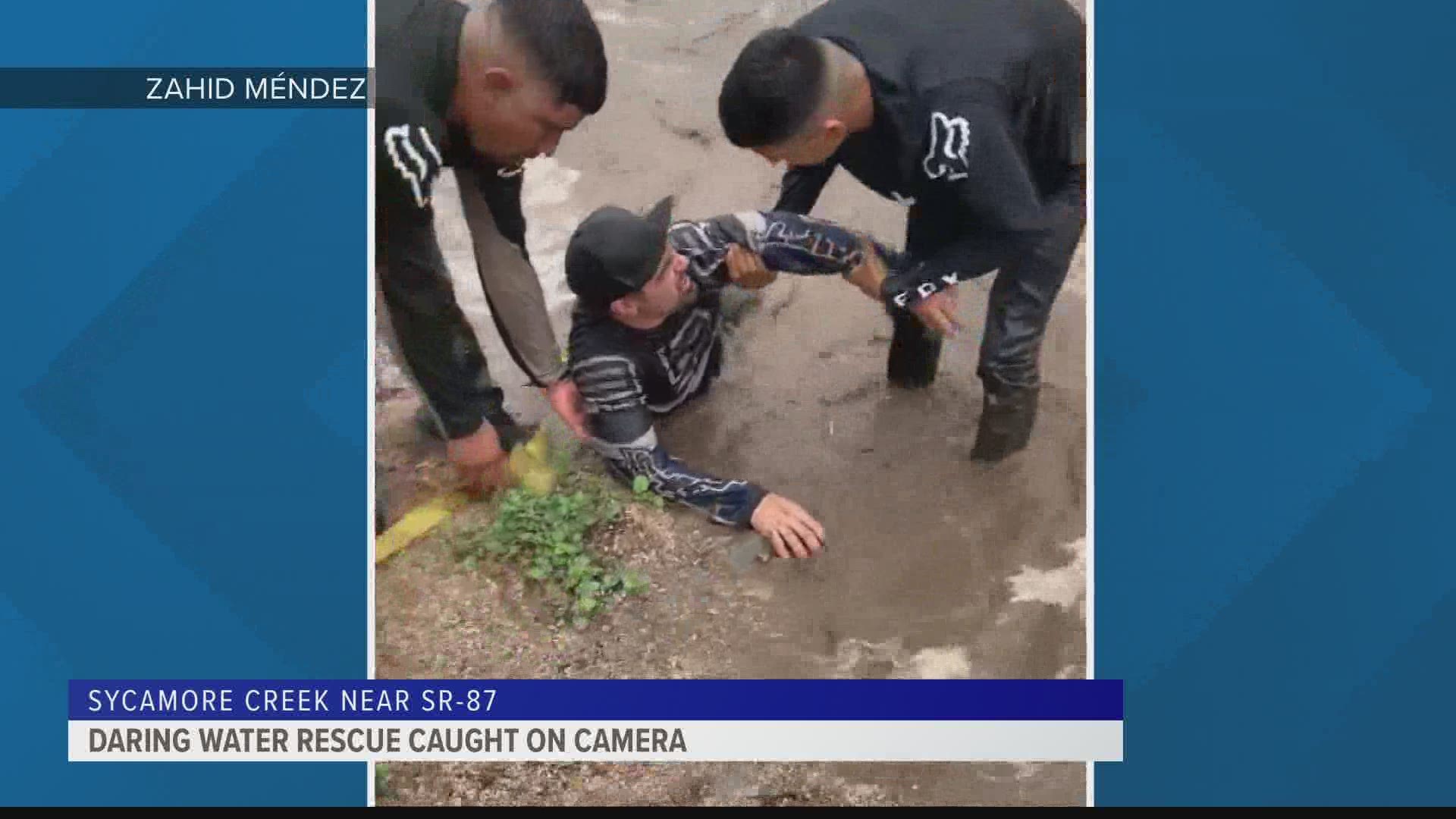 FORT MCDOWELL, Ariz. — It was supposed to be a fun day in the outdoors, but it turned out to be a life-saving mission for a group of off-roaders Sunday.

Martin Lopez’s friends and family had just arrived at Sycamore Creek just north of State Route 87 and Bush Highway in the Tonto National Forest when they saw a Ford Explorer floating down the flash flood water.

Video captured by Zahid Méndez shows the vehicle coming to a stop next to where the group was unloading their motorcycles, but seconds later it flips over on its left side.

“Get out, get out,” you hear the group yelling as they whistle and made other noises trying to get the passenger's attention.

Sixteen seconds later, an eight-year-old boy emerges out of the passenger side window. The crowd orders him to stay put.

The boy’s father and another man are later seen in the video come out of the vehicle.

Lopez’s group then gets ropes and tries to toss them to the three passengers, who were taking shelter on top of the flipped Explorer, but that was unsuccessful.

One minute later, the vehicle flipped over on its roof, sending the two adults and child floating down the stream.

The video shows the crowd running along while following the people in the water until Roberto Varela jumped in and grabbed the boy.

“I was just thinking of what I could do to help,” Varela said. “When I got in and grabbed the boy, that’s when [the dad] released him. He didn’t have any strength or anything, he let himself go in the water, that’s when [Lopez] caught him later.”

In the video, you can see Varela holding the child. Three other men, including Lopez, also jump in the water to help him get out safely.

Those same men then take off sprinting, with ropes in hand, and try to the boys’ father.

Lopez goes in first, then Varela. They tell him his son is safe.

The men then drag the father out of the water, who appears to be tired and out of breath, but okay.

Varela and Lopez said they wouldn’t hesitate a second if they encountered the same situation again.

“I’m just glad we were there to help,” Lopez said.

Miranda Franks and her family were out celebrating her birthday in Sycamore Creek on Sunday.

After a morning of fun, Franks said they were on the side of the road eating sandwiches when water suddenly began to fill their feet. A flash flood had reached them.

The family was driving two separate vehicles. They quickly got inside and tried to drive to higher ground, but they ended up on the wrong side of the water.

Franks said they drove around for a bit until they encountered a group of people whose vehicle had been caught by the fast-moving waters and were stranded.

She said her husband offered to help one of the men by driving him to get cell service, but his vehicle was swept away by the flash flood after he tried to pass over the water.

Her eight-year-old son was scared while in that vehicle.

Franks said they had walkie-talkies and she was able to talk to her son as the vehicle was floating away and she was trying to calm him down.

“I felt helpless,” Franks said. “All I could do is hit my knees and just pray that they were going to be okay. I watched them go in the water. I didn’t know if they were even alive.”

A helicopter rescued Franks and her young daughter.

She said it wasn’t until hours later until she found out they were both safe.

“After they went in the water, he said that he bear-hugged my son,” Franks said. “He managed to keep my son above water while my husband was going in and out trying to keep his breath and keep my son up.”

Father, son, and the man they were helping suffered scraped and bruises Franks said.

She said she is eternally grateful to all the people that helped save her family and now hopes their close call serves as a lesson for others.

Their Explorer is a total loss, now buried in the sand. They created a GoFundMe to help with the financial loss.

“I pray to got that nobody else has to learn the hard way as we did,” Franks said. “If you see the flash floods just wait it out, don’t drive through it, it’s not worth your life.”