The history-making mission is set to launch on Sept. 15 from Florida's coast. 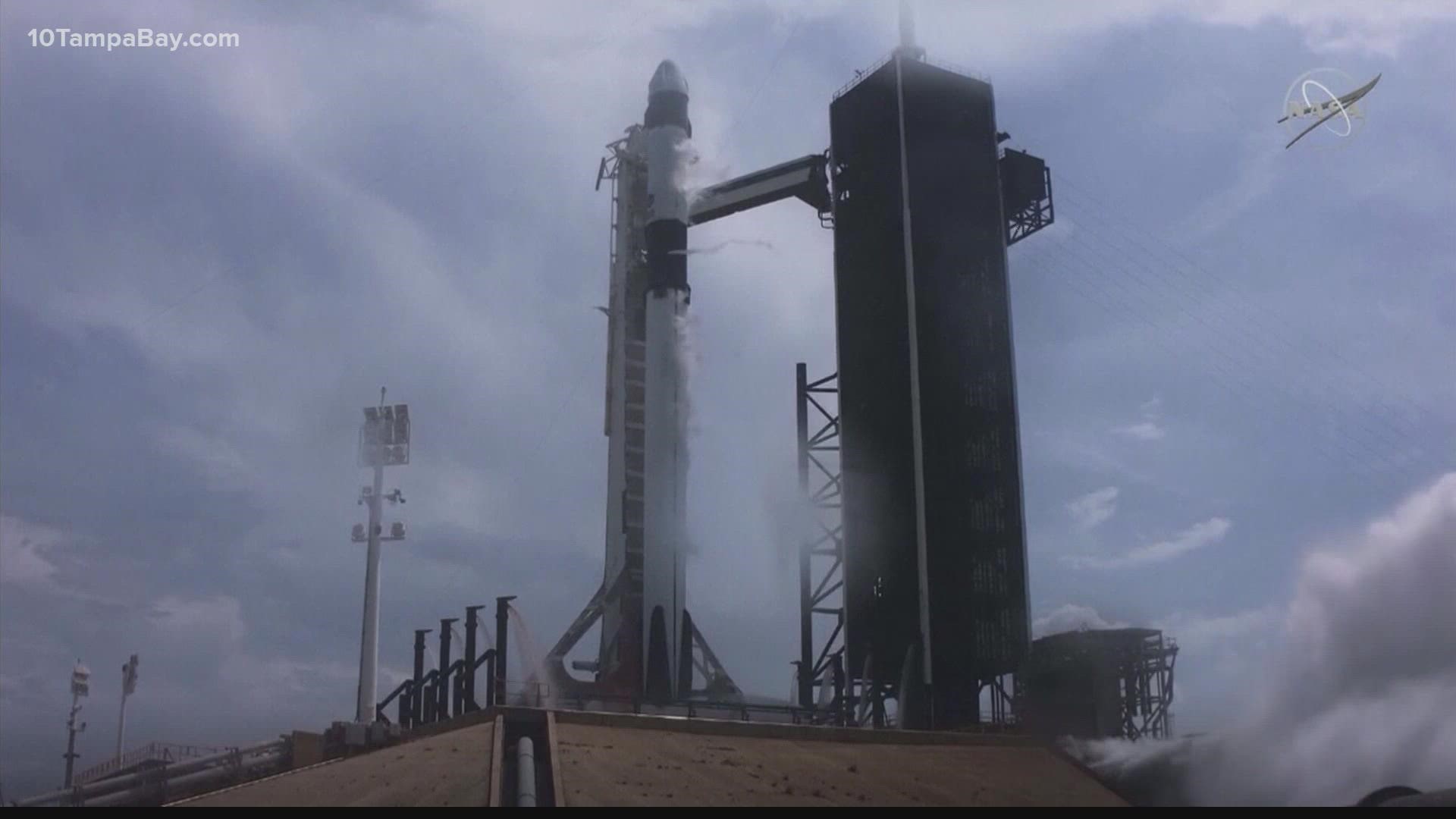 CAPE CANAVERAL, Fla. — SpaceX's opportunity to prove a ride into space no longer requires being a professional astronaut is drawing near.

The all-civilian Inspiration4 crew is preparing to embark on their multi-day journey to orbit the planet we call home every 90 minutes. And they've spent months training for their history-making moment in the spotlight.

Slated to strap in for their mission at 8:02 p.m. ET on Sept. 15, the four-person crew will launch in a Crew Dragon spacecraft atop a Falcon 9 rocket from Florida's coast.

While the mission will continue to prove how far space exploration has come, SpaceX's all-civilian launch also has a humanitarian angle.

The mission plans to "inspire support for St. Jude Children’s Research Hospital and send a humanitarian message of possibility while representing a new era for human spaceflight and exploration."

So, here's what you need to know ahead of liftoff:

What time is launch?

The first all-civilian crew will launch atop a Falcon 9 rocket to orbit Earth aboard its Crew Dragon spacecraft from the historic Launch Complex 39A at NASA’s Kennedy Space Center in Florida.

Teams met on Sept. 3 for a "Flight Readiness Review" and were given the "Go" to proceed toward launch. The crew and their spacecraft have also cleared a static fire test and full dress rehearsals in preparation for liftoff.

The U.S. Space Force's 45th Weather Squadron's latest forecast predicts a 70-percent chance for favorable conditions on Sept. 15. As always, in Florida, the weather is subject to change and could still carry an impact.

While of shortage of liquid oxygen, also needed for COVID-19 patients on ventilators, has been threatening some launches, that will not be the case for Inspiration4. A mission spokesperson confirmed to 10 Tampa Bay that the shortage will not have an impact on liftoff for the all-civilian crew.

A backup launch opportunity is set for Sept. 16.

With the #Inspiration4 launch now just 3 days away, weather conditions are 70% favorable and we’ve narrowed our launch window to 5 hours beginning at 8:02 pm EDT on 9/15. Stay tuned for more updates soon! https://t.co/nhZRJvvX1l pic.twitter.com/Z4pRlmv4Ew

How can I watch the launch?

To catch all the action you can tune in to 10 Tampa Bay where we will be streaming live on Facebook, YouTube and online.

SpaceX will also be providing its own live feed of the mission which can be found on its website or Youtube page.

If you're looking to catch the action in person, the Kennedy Space Center is offering a "FEEL THE HEAT Package" for viewers to get as close to the pad as possible. The experience will cost $250 before tax but does include admission, a meal. souvenir, bus transportation and more.

RELATED: What does it take to be a commercial astronaut? The FAA just changed its requirements

RELATED: As private spaceflights launch, who gets to be called an astronaut?

Who is on the crew?

Jared Isaacman: The 38-year-old billionaire, founder/CEO of Shift4 Payments and an accomplished jet pilot who funded the trip will serve as the mission's commander. He will fulfill the Inspiration4 pillar of leadership.

"In fulfilling a personal and lifelong dream, I recognize the tremendous responsibility that comes with commanding this mission," he said, in part, of his role.

Hayley Arceneaux: The 29-year-old childhood cancer survivor who now works at St. Jude, the hospital system that helped save her life, will serve as the mission's medical officer. She was selected to fulfill the Inspiration4 pillar of hope.

Chris Sembroski: The 41-year-old aerospace industry employee and U.S. Air Force veteran who "grew up with a natural curiosity about outer space" will serve as a mission specialist. He was selected to fulfill the Inspiration4 pillar of generosity.

Dr. Sian Proctor: The 51-year-old entrepreneur, educator, trained pilot and "active voice in the space exploration community" will serve as the mission's pilot. She was selected to fulfill the Inspiration4 pillar of prosperity.

How was the crew selected?

It all started in March 2021, when SpaceX announced Isaacman had purchased and donated the three mission seats alongside him. The plan was to find crew members who represented the mission pillars of leadership, hope, generosity and prosperity.

The seat for "hope" was already set aside to be filled by an employee of St. Jude, the hospital the mission seeks to raise money for, but the other two were open to anyone to apply for.

All you had to do was head to the mission's webpage and select "secure your seat" and either donate to St. Jude Children's Research Hospital or start a Shift4Shop and post an inspirational business story on Twitter.

RELATED: Here's how NASA treats astronauts who get sick in space

How will the mission work?

Lifting off from Launch Complex 39A in Cape Canaveral is just the beginning for the four-person crew who have no long-term astronaut training. Once in space, the crew will embark on a multi-day journey in low Earth orbit at more than 17,000 miles per hour.

Onboard the Crew Dragon capsule, the civilian crew will also conduct experiments "designed to expand our knowledge of the universe." According to SpaceX, the research will look at the impact of spaceflight on the human body.

Data collected will then be used to uncover potential applications on human health for future spaceflights and benefits for those on Earth. Crew members will also be subject to study by the Translational Research Institute for Space Health and Weill Cornell Medicine.

Investigators will "collect environmental and biomedical data and biological samples from Inspiration4’s four crew members before, during, and after this historic spaceflight," a press release reads.

As the first all-civilian crew to orbit the Earth, Inspiration4 is excited to share experiments and research with @SpaceX, @BCMSpaceHealth & @WeillCornell that will help continue to broaden access to space exploration. Learn more: https://t.co/csmG8VfQS8 pic.twitter.com/aRC1lwNu1z

What to know about the spacecraft?

The Crew Dragon spacecraft used for the Inspiration4 mission will be the same type of capsule used by NASA astronauts under the space agency's commercial crew program. But there will be a bit of a twist.

A glass dome has been added to the Crew Dragon to give crew members a 360-degree view of outer space. The dome has been placed where the space station docking system usually goes, seeing as that element will not be needed for the Inspiration4 mission.

A look at Dragon’s Cupola, which will provide our Inspiration4 astronauts with incredible views of Earth from orbit!

The crew visited the flight-hardware Cupola in California before it was shipped to Florida for integration with Dragon Resilience. pic.twitter.com/9ivMZrS1ip

Why is this a history-making mission?

While companies like Virgin Galactic and Blue Origin have sent crews on quick, suborbital sight-seeing trips, of sorts, the SpaceX Inspiration4 crew will be the first-ever all-civilian crew to embark on an orbital mission.

Unlike the others, Isaacman, Arceneaux, Sembroski and Proctor will be alone in space for several days while they conduct research.

According to SpaceX, "this milestone represents a new era for human spaceflight and exploration."

RELATED: Time to declutter? There is a growing problem of debris in space

How are non-astronauts going to space?

With lots and lots of commercial astronaut training. Since the crew was announced earlier this year, SpaceX says they've been "focused extensively on mission training and preparation."

"This focused preparation was essential in team development and being ready to execute their role as the first commercial crew to orbit the Earth," SpaceX wrote.

The crew also added the team-building activity of climbing Mount Rainer in Washington state to their training list to help the group get "comfortable being uncomfortable" with each other.

RELATED: Here's how upcoming all-civilian crew members will train to go to space