How many innocent people are in U.S. prisons, and why can’t we find them?

Most estimates put the number of wrongfully convicted people in the tens of thousands. Fewer than 3,000 have been exonerated in the last 30 years. 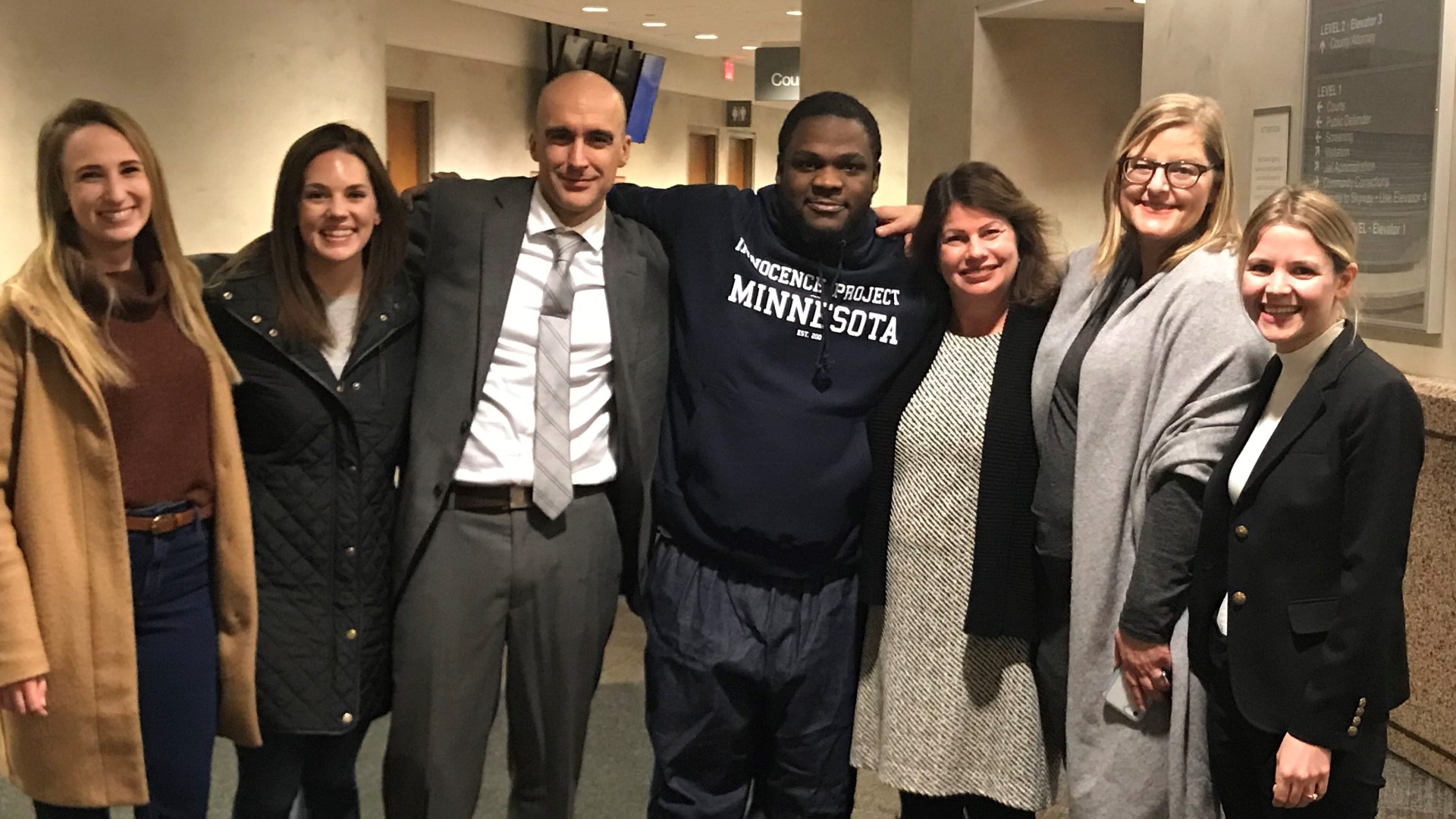 When Javon Davis was wrongfully convicted of attempted murder, his 15-year-old daughter took it the hardest of all his kids.

She used to ask him on the phone, “Why didn’t you tell who did it?”

His daughter responded, “Then how are you going to get out of jail?”

For Javon Davis, the answer was the Great North Innocence Project. Highly experienced and passionate lawyers took on his case, and managed to win an appeal and get his conviction vacated. But it took nearly six years to win his freedom.

And based on the limited data that’s available, Javon Davis is in the minority. Because the short answer to his daughter’s question - is that most people don’t get out.

No one knows how many wrongfully convicted people are sitting in U.S. prisons, but we do know they’re there. That’s because sometimes there’s proof. The most definitive way to root out wrongful convictions is DNA testing, which has cleared 375 people in the U.S. since 1989. Twenty-one of them were on death row.

Researchers can use the number of DNA exonerations and extrapolate from there to estimate how many innocent people are in prison right now. Most estimates put the number between 1% and 5%. With nearly 2.3 million people incarcerated in the U.S., that gives us a low-end estimate of more than 20,000 people, and at the higher end, over 100,000.

And how many have been exonerated? It’s more than 375.

RELATED: Record of Wrong: The strings attached in the pursuit of freedom

The University of Michigan Law School keeps a National Registry of Exonerations where they attempt to track all exonerations, not just those reached with DNA evidence. This registry includes a broader definition of exoneration, including when a judge throws out a conviction, prosecutors drop a complaint, or a person is acquitted at a new trial. That registry has documented more than 2,700 exonerations in the last 30 years. Eighteen of them were in Minnesota.

But they’re hard to find. Because the system is set up to make it very, very hard to get out.

The phrase “innocent until proven guilty” is essential to the criminal justice system in the U.S. It’s the most fundamental right of an accused American.

But Julie Jonas, the legal director for the Great North Innocence Project, said once you’re convicted - the system flips on its head. And it’s not an accident. That’s the way it’s designed.

“After someone is convicted, instead of the individual liberty being the primary concern of the courts, the finality of the verdict really becomes the primary concern of the courts,” she said. “And for many reasons, right? I mean, our system would be clogged up if you had to retry cases over and over and over again. And of course, it wouldn't be fair to victims either.”

David Schultz, a former defense attorney and now a federal magistrate judge for the District of Minnesota, explained it like this.

“There have to be high hurdles because if there aren’t, then everybody is going to say, obviously, ‘We're innocent,’” he said. “The problem comes in when you have people who are innocent and then they keep stumbling over the hurdles. Because it takes an awful lot of patience and energy and a truly open mind to look at something with a fresh eye.”

When the finality of the verdict becomes the primary goal of the system, the defendant loses a lot of the rights that benefited them during and leading up to the trial.

“Many of the constitutional protections that someone enjoys pretrial: the presumption of innocence, that the state has the burden of proving guilt, right to an attorney, right to exculpatory information, all of those constitutional rights, the defendant who's now in prison and convicted, has lost,” Jonas said.

So now those innocent people who have been wrongfully convicted become guilty until proven innocent. And there’s a powerful system against them, with a goal of keeping them convicted.

The defendant does have the right to an attorney for a direct appeal within 90 days, but after that, they must pay for an attorney or find someone who is willing to represent them pro bono. Another option is to file an appeal “pro se,” or on your own, which Javon Davis did before the Great North Innocence Project took him on.

Unfortunately for the defendant, the point at which they lose their right to an attorney is the same point where everything gets a lot harder.

Doug Peine, who served as a federal appeals attorney and successfully got a conviction overturned for a pro bono client in the early 1990s, explained: “The benefit of doubt is always going to go to the lower court.”

In this way, he said, denials can snowball quickly. A judge who looks at a person’s case may see that they’ve already been denied several times, and they will tend to give the benefit of the doubt to the judge before them.

Peine said appellate courts are essentially designed to say, “We're not going to be the jury here.”

“Appellate courts are very, very reluctant to overturn a jury trial,” Peine said. “Juries are intended to be the determiners of the facts. And if there is a dispute of facts, our system decided that it's better for a group of laypeople to take into account the demeanor of the witnesses, and that you really need to be in the courtroom to make a determination of, ‘How trustworthy does that witness seem and how much weight should I give to his or her testimony?’”

Julie Jonas pointed out that this “finality of the verdict” principle also means that for appeals beyond the first direct appeal, the defendant has to produce some new piece of evidence that the jury did not have access to.

“After that direct appeal is finished, then you really need something new,” she said. “There's a lot of procedural hurdles that say you can't raise things that were known about at the time of trial or appeal and be successful in post conviction. You need to develop new evidence.”

Here’s the process a person has to go through if they want to fight their conviction.

First, they can make a motion for acquittal - or for a new trial. That happens immediately after the verdict. It’s not technically an appeal, and it’s a fairly routine step. Some lawyers describe it as a chance for the judge to throw out the conviction and order a new trial if they saw a glaring problem.

If they say no, it’s onto the direct appeal at the Minnesota Court of Appeals. If they deny an appeal, the person can ask the Minnesota Supreme Court to review it.

If a federal habeas petition is denied, the person can petition the United States Supreme Court to review it, although the chances of the nation’s highest court taking the case are slim.

Each appeal can take months, or years. Prosecutors have the chance to respond, and often many briefs go back and forth before a judge ever makes a ruling.

Of the hundreds of DNA exonerations in the U.S., the average amount of time spent in prison was 14 years.

“We've had many cases that have been in our office seven, eight, nine, 10 years,” Julie Jonas said. “There are many people, and those are probably the saddest cases that we work on, where we look at the trial, we think that there were mistakes made, but there's no new evidence. There's nothing that we can develop that's new and that wasn't available at the time of trial. So we can't beat the procedural hurdles that are required to secure somebody's release.”

Jonas said the cases she can’t win are the hardest ones to face.

“That's what's really, really frustrating, is when we look at a case and we think they're innocent, but there's just nothing we can do to help,” she said.

Javon Davis thought a lot about others like him while he was in prison, and said he still thinks about them.

“I can tell you … and everybody in the world how it is, but it's something you would never be able to get because you don’t go through it,” he said. “And it just makes you think about other people. How many more people are sitting in jail for no reason? I know that feeling. I know. I know. I know that feeling. And it is one of those things like, if it hasn't happened to you, you can't fully know, because It's horrible.”

RELATED: After another man confessed to the crime, Hennepin County offered deal to preserve conviction