Arizona Public Service, the state's largest utility, is seeking an 8-percent rate hike on residential customers and a huge cut in what the utility calls a "lucrative solar subsidy." 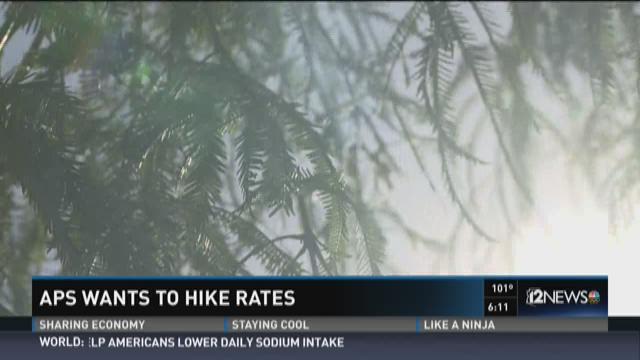 This story was originally published in 2016.

PHOENIX - Arizona Public Service, the state's largest utility, is seeking an 8 percent rate hike on residential customers and a huge cut in what the utility calls a "lucrative solar subsidy."

The new rate plan was disclosed Wednesday in the utility's filing for a rate review with the Arizona Corporation Commission. The review is expected to take a full year, with new rates becoming effective as soon as July 2017.

The rate increase would average about $133 per year, the equivalent of paying an extra monthly bill for current customers. The average monthly bill would rise from $139.32 to $150.41, according to APS.

The utility's proposal also takes a big step toward eliminating "net metering," the credits APS gives solar customers for the electricity they generate.

The utility has fought for three years to either eliminate or reduce net-metering credits. Those credits help make solar affordable. The solar industry contends APS is trying to put the industry out of business in Arizona.

“There will be the usual naysayers who want to protect the status quo for their short-term financial gain, but Arizona has delayed too long already.”

The rate proposal is part of a sweeping overhaul of APS' rate structure.

If the proposal is approved as is, APS might become the first investor-owned utility in the country to introduce so-called "demand charges," a new charge on customers for their highest one-hour use of electricity in a given month during the peak period of 3 to 8 p.m.

Stephanie Layton, director of revenue requirements at APS, said the utility was targeting customers who max out on electricity when the utility's power grids are maxing out.

"Somebody that turns everything on all at the same time, uses their four major appliances all at once," Layton said.

The utility says it's trying to change customers' behavior to reduce APS' spending on the grid.

"That is the type of customer where we'd like to see behavior changes to lower their costs," Layton said.

"It's very hard to understand how it works, because no one has the meters or equipment in their house to know when they're hitting that surge price moment," Mayes said.

"It's just a dramatic overreach on the part of the state's largest utility," Mayes said.

APS' rate case comes amid persistent questions about whether the utility's dark money campaign spending to influence the election of Corporation Commission regulators, who oversee APS.

Three seats on the five-member commission will be up for election in the fall.

Incumbent Robert Burns, a Peoria Republican, has demanded that APS reveal how much money it has spent on commission elections. The company has so far refused, claiming a constitutional right to spend money anonymously.

We are witnessing a retelling of the story of David vs. Goliath. The modern day Goliath is APS. Believed to control millions of dollars in political campaign money, APS has an incredible influence over candidates and elected officials, particularly those for the Corporation Commission. The message to them is simple: help us out, or face the consequences.

APS spokesman Jim McDonald declined to say how the company might get involved in this year's election.

Regarding Burns' email, McDonald said: "We have great respect for the commissioner."