The top 5 Arizona sports teams of Bruce Cooper's career, according to him

To look back on his career, we had Coop choose the top five Arizona sports teams of his career. 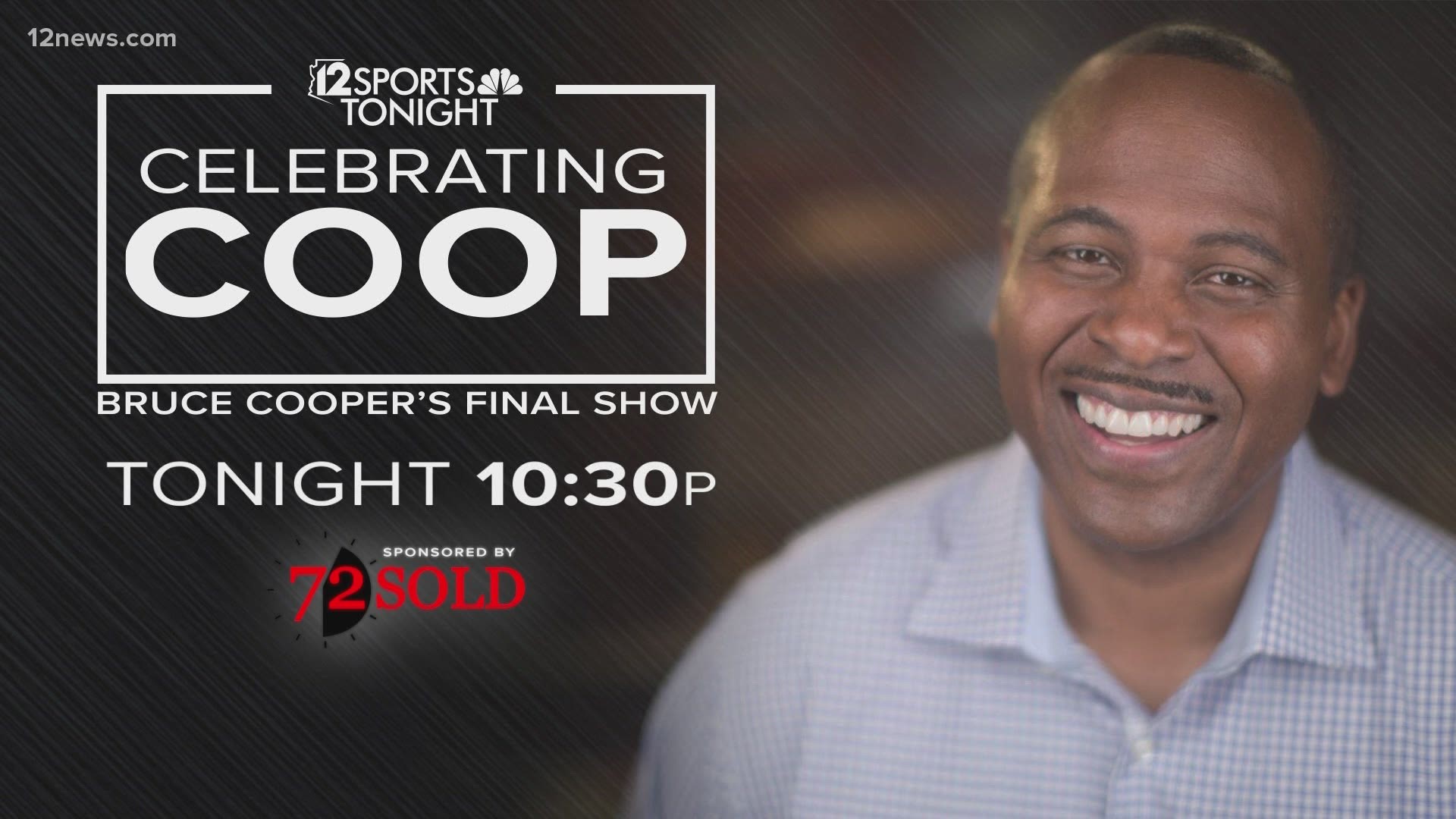 PHOENIX — This past weekend, 12 News said goodbye to Bruce Cooper after a legendary and transformative 30-plus-year career in Phoenix.

In Coop’s career in Arizona, he saw the Valley gain four new sports teams (Cardinals, Coyotes, D-backs, Mercury) and he’s seen many highs and many lows out of all Arizona sports teams.

To look back on his career, we had Coop choose the top five Arizona sports teams of his career.

The 1993 Phoenix Suns are still known as one of the best teams to not win the NBA Finals. That’s all thanks to Michael Jordan, Scottie Pippen and the Chicago Bulls.

Prior to the season, the Suns traded for Charles Barkley, who would go on to win MVP, averaging 25 points, 12 rebounds and 5 assists per game.

Barkley, along with Tom Chambers, Dan Majerle, Kevin Johnson, Danny Ainge and more were the No. 1 seed in the West with a 62-20 record and went on to play the Bulls in finals.

The Suns would drop the first two games at home and then go on to win a 3OT thriller in Chicago in Game 3. The series headed back to Phoenix with the Bulls up 3-1 in the series. The Suns took Game 5 before losing Game 6 by one point thanks to a game-winning three from John Paxson.

Charles Barkley spoke during the airing ESPN’s The Last Dance docu-series, about the 1992-93 Suns, saying it was the best team he had ever played for.

RELATED: Charles Barkley on coming to Phoenix, ‘93 Finals and ESPN’s ‘The Last Dance’

Credit: AP
The Arizona Diamondbacks celebrate their 3-2 win over the New York Yankees in Game 7 of the World Series Sunday, Nov. 4, 2001, at Bank One Ballpark in Phoenix. (AP Photo/Joe Cavaretta)

Another pretty obvious one here for Coop, the 2001 World Series Champion Arizona Diamondbacks. Of the big 4 major sports in Arizona, the 2001 D-backs are the only ones to win a championship.

The ‘01 D-backs did it with hitting and pitching. Outfielder Luis Gonzalez led the team with a whopping 57 home runs that season, trailing only Barry Bonds (73) and Sammy Sosa (64) for the MLB lead.

The team finished the regular season 92-70, winning the NL West title. They won the NLDS against the St. Louis Cardinals with a Tony Womack walk-off hit, the beat the Atlanta Braves in the next series in five games and then won a 7-game series against the New York Yankees on a walk-off hit by Gonzalez off of Yankees closer Mariano Rivera.

The D-backs, in their fourth season, became the fastest expansion franchise in MLB history to win a World Series title.

Along with the 1992-93 Phoenix Suns, the 2009 Arizona Cardinals are another one of the best Arizona teams that didn’t win a title, but they were oh, so close.

The team went 9-7 in the regular season, earning a Wild Card spot in the playoffs. The Cards went on a magical run all the way to Super Bowl XLIII, where they lost to the Pittsburgh Steelers 27-23.

The 1996 Arizona State football team is one of the best in school history. The Sun Devils began the season ranked 20th in the nation and then went 11-0 in the regular season.

The team was clearly for real when, in week 3, they defeated No. 1-ranked Nebraska at Sun Devil Stadium 19-0.

ASU surged into the top 10 and went all the way to No. 2 and played in the Rose Bowl against No. 1-ranked Ohio State for the national championship. The Buckeyes would win the game 20-17.

The 1998 Arizona Cardinals were the first Cardinals team to have a winning record since 1984, when the team was still in St. Louis.

The team finished second in the NFC West and secured a Wild Card berth to playoffs off of a 9-7 regular season showing.

The team, coached by Vince Tobin, and led by former ASU star Jake Plummer at quarterback, would beat the Dallas Cowboys in the Wild Card 10-7 before losing to the Minnesota Vikings in the Divisional Playoffs 10-8.

It was the first time the Cardinals had made the Divisional Playoffs since 1975.

Smile. That's my word association for @12newscoop. Not just his smile - mine. Going back 25 years now, Coop never fails to crack me up. Congrats, Coop. Keep the sports opinions flowing. Now, about your Top 5... #ITellYouWhat https://t.co/kFymB0jhuG

We spent the last two weeks celebrating all things Coop and reliving the funny moments, the sweet and heartwarming and the inspirational. Click here to see throwback clips and some of the best moments from his career.

I tell you what... I love you like a brother @12newscoop. I could've never imagined when I moved to the valley 6-years-ago that I would end up spending more time with you then my own family. #12Sports @12SportsAZ #ThankYouCoop pic.twitter.com/sWRnPJLYmu

THANK YOU SO MUCH to all the high schools that contributed helmet stickers to my retirement gift to Coop. It turned out awesome and is already hanging up in his man cave!! #12Sports pic.twitter.com/st0Wp76wTH