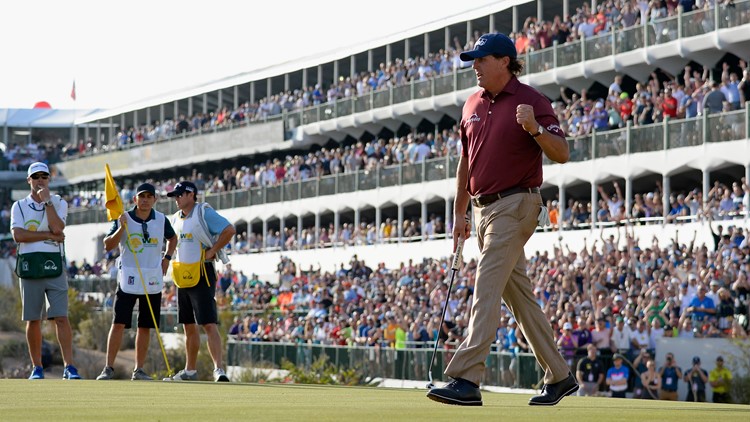 Photo by: Getty Images
SCOTTSDALE, AZ - FEBRUARY 02: Phil Mickelson waves to the gallery after making a birdie on the 16th hole during the second round of the Waste Management Phoenix Open at TPC Scottsdale on February 2, 2018 in Scottsdale, Arizona. (Photo by Robert Laberge/Getty Images)

Instead of playing in the WMPO Jan. 30-Feb. 3, Mickelson will play in the Saudi International tournament on the European Tour.

"I am really looking forward to playing in Saudi Arabia in January," Mickelson said in a statement. "I watched Dustin [Johnson] win the title last year and thought the course looked like an interesting challenge. Having so many talented players on show also made it look like a much more established tournament than one in its inaugural year. I have enjoyed my previous visits to the Middle East and am looking forward to playing in a new country and doing my bit to grow the game in the Kingdom."

Those players will likely receive appearance fees for playing, allowed by the European Tour.

Of the above group, only Mickelson and Finau played in the 2019 WMPO, but both missed the cut.

The inaugural Saudi International tournament last year was met with criticism as the European Tour went forward with the event just months after the killing of journalist Jamal Khashoggi.

The Washington Post writer, who was living in the United States at the time, was assassinated inside the Saudi Consulate in Istanbul, Turkey, in September 2018, Turkish officials said.

The Saudi International tournament is sponsored by the Saudi government.

Mickelson played in 20 PGA Tour events last year, winning one, placing second in another and missing eight cuts. He is currently ranked 58th in the world.