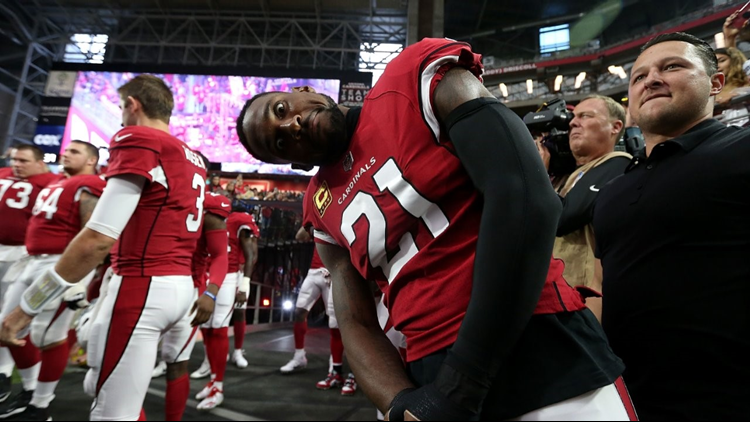 GLENDALE, Ariz. - There's reportedly even more trouble for the last place Cardinals other than an offense that ranks dead last in yards and points, forcing the firing of an offensive coordinator after an embarrassing 45-10 lashing from the vising Broncos last Thursday night on national television.

Star Arizona cornerback, one of two main faces of the franchise over the last decade, Patrick Peterson has reportedly requested a trade, according to ESPN's Adam Schefter.

Cardinals’ All Pro CB Patrick Peterson has asked Arizona to deal him by the Oct. 30 trade deadline, per league sources. Peterson feels as if the situation is deteriorating and continues to reaffirm to others that he “desperately” wants out, per source.

Furthermore, Schefter reports that Peterson continues to ask for a trade and the team continues to tell him it's not an option.

There have been rumblings about Peterson wanting a trade earlier this year. Those rumors were shut down by the team. Then, team president Michael Bidwill said last week, prior to Thursday night's game, that a Patrick Peterson trade was "not happening."

Obviously, the Cardinals don't want to lose a staple of their franchise and one of the best cornerbacks the league has to offer. But, if Peterson isn't going to be happy and continually want out, it could cause damaging issues to the team and the locker room, even more than already exist with a 1-6 record.

Unfortunately for the Cardinals, now that this report is out, it decreases Peterson's value. When it's reported that a player wants out, teams can bargain down the asking price because the existing team will usually take less to avoid the morale issues.

But, it sounds right now like the Cardinals are not willing to even think about trading Peterson and the trade deadline is only eight days away.

There have already been some very notable big name trades this season. The Oakland Raiders traded linebacker/defensive end Khalil Mack to the Chicago Bears prior to the season for first-round picks in 2019 and 2020, a third-round pick in 2020 and a sixth-round pick in 2019.

On Monday, the Oakland Raiders traded wide receiver Amari Cooper to the Dallas Cowboys for a first round pick.

Cornerback is a very important position in the NFL, one of the most highly valued.

Some notable cornerback trades in recent history include the New York Jets trading Darrelle Revis to the Tampa Bay Buccaneers for a first round and a fourth round pick in 2013. The Los Angeles Rams traded a fourth round and second round pick for Kansas City's All-Pro Marcus Peters this offseason. The Rams also traded for All-Pro Aquib Talib, giving up just a fifth-round pick to the Denver Broncos.

Hypothetically, the asking price from the Cardinals would be very high here. It would definitely include a first round pick and if there are no other players involved, probably a third round pick, both next year. And who knows if that would even be enough. The problem is they may not be able to get that now that it's new Peterson wants out.

Peterson is 28 years old and isn't a free agent until 2021. There are certainly plenty of teams in need of a cornerback, but there would have to be a team desperate enough to pay a high price for Peterson right now, because it sounds like the Cardinals are not willing to trade, or at least not willing to show their cards, no pun intended.

The only teams that would pay a large price for Peterson right now are teams in contention for the playoffs that need a great corner. But, those draft pick requirements from the Cardinals would get even more substantial because that means the team trading for Peterson would pick even later.

Teams in contention that could definitely use a cornerback of Peterson's caliber include the Kansas City Chiefs, New England Patriots, Atlanta Falcons, who have multiple major injuries on defense right now; New Orleans Saints, his ideal destination and where he would lineup across the field from young superstar CB Marshon Lattimore; and the Philadelphia Eagles. Each of those teams rank in the bottom half of pass defense.

But, unless the Cardinals have already been quietly shopping Peterson, it's unlikely they get a deal before the deadline they love unless a team really decides to go all-in, like it appears the Cowboys did today for Amari Cooper.

Patrick Peterson was drafted by Arizona fifth overall out of LSU in 2011. He's been a Pro Bowler every year of his career, is a 3-time first team All-American and has 23 career interceptions, which is 14th among active defenders.