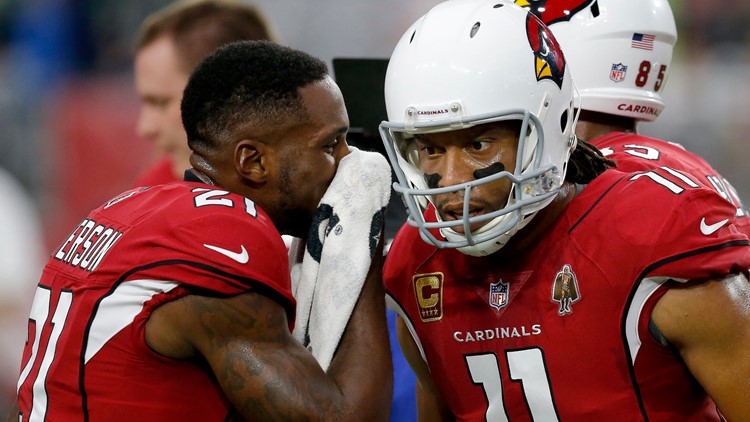 Patrick Peterson: 'If I had to put my last dollar on it' Larry Fitzgerald will return

LOS ANGELES — It's that time again. The NFL regular season is over, the new year is about ring in and the Cardinals aren't in the playoffs, so we're looking ahead to next year.

With Kliff Kingsbury's job safe after a 5-10-1 first year, the No. 1 question on everyone's minds: Is Larry Fitzgerald coming back?

We waited until Jan. 23 of last year to hear that Fitzgerald would return for his 16th season. After getting one year down with a rookie head coach and a rookie quarterback, does he have another year left in him?

Patrick Peterson seems to think so.

When asked after the game about whether he thought Fitz would return, Peterson said he thinks he will.

"If I had to put my last dollar on it, I'd probably say he's coming back," Peterson said. "But you never know with Fitz, he'll keep you guys in the dark just like he keeps us in the dark."

Fitzgerald said after the game that decision has not been made yet. When asked if he thought he might be playing his last game Sunday, he said he didn't think about it.

"You can't have those types of thoughts on your mind," Fitzgerald said. "For me, to be able to focus and play the way I'm capable of playing I've got to stay completely in the moment and that's where I'm best served and at my best."

As for his impending decision, Fitzgerald says he needs to go through his checklist.

"I've got to talk to Michael [Bidwill] and make sure that they want me back, even if that's an option and you kind of got to go through the checklist and process but I love this organization with all my heart, I've given everything I've had for 16 years and I just got to take a little time to figure it out and obviously talk to the boss man."

Coming out of the dismal 2018 season, Fitzgerald had a career-low 734 yards on 69 catches, as well as six touchdowns, in 16 games. While the offense certainly improved for Arizona this season, his numbers didn't inflate much. He had 804 yards receiving on 75 catches and four touchdowns in 16 games. He caught nearly 70% of the balls thrown his way.

This time, the 36-year-old wouldn't have to go through a coaching change and have a new quarterback behind center and learn a new system, like he did when he came back for year 16.

Fitzgerald has commended Kyler Murray all year on his growth and ability as an NFL quarterback, including after week 17's game against the Rams when Murray played on a bad hamstring despite there being nothing at stake for the Cardinals.

"He came out and threw for 300 yards, stayed in there against a premier pass rusher in the NFL, Aaron Donald, and I think that just shows a lot of character and guys see that and want to play with him," Fitzgerald said after the 31-24 loss.

Fitzgerald also spoke high praise of Murray and the future of the Cardinals.

"To see Kyler's maturation and the way he was able to perform this year, I think it's a runaway for rookie of the year for him," Fitzgerald said after Sunday's loss to the Rams. "He's Houdini back there. We've got a really bright future here for this organization for a very long time, we're privileged to have him and we'll try to build around him for years to come."

Murray threw for 300+ yards five times this season and became just the second rookie in NFL history to throw for 3,500 yards and run for 500 more (Cam Newton).

The Cardinals won two of their last three games and made dramatic defensive improvements in the final quarter of the season. Time will tell if the positive momentum and Kyler Murray's potential will carry enough weight into Fitzgerald's decision.