'I just ask everybody to take this seriously.' Michael Bidwill opens up about COVID-19 hospitalization

Arizona Cardinals owner Michael Bidwill opened up about his scary expereince with COVID-19 this summer in a 1-on-1 interview with Team 12's Ryan Cody. 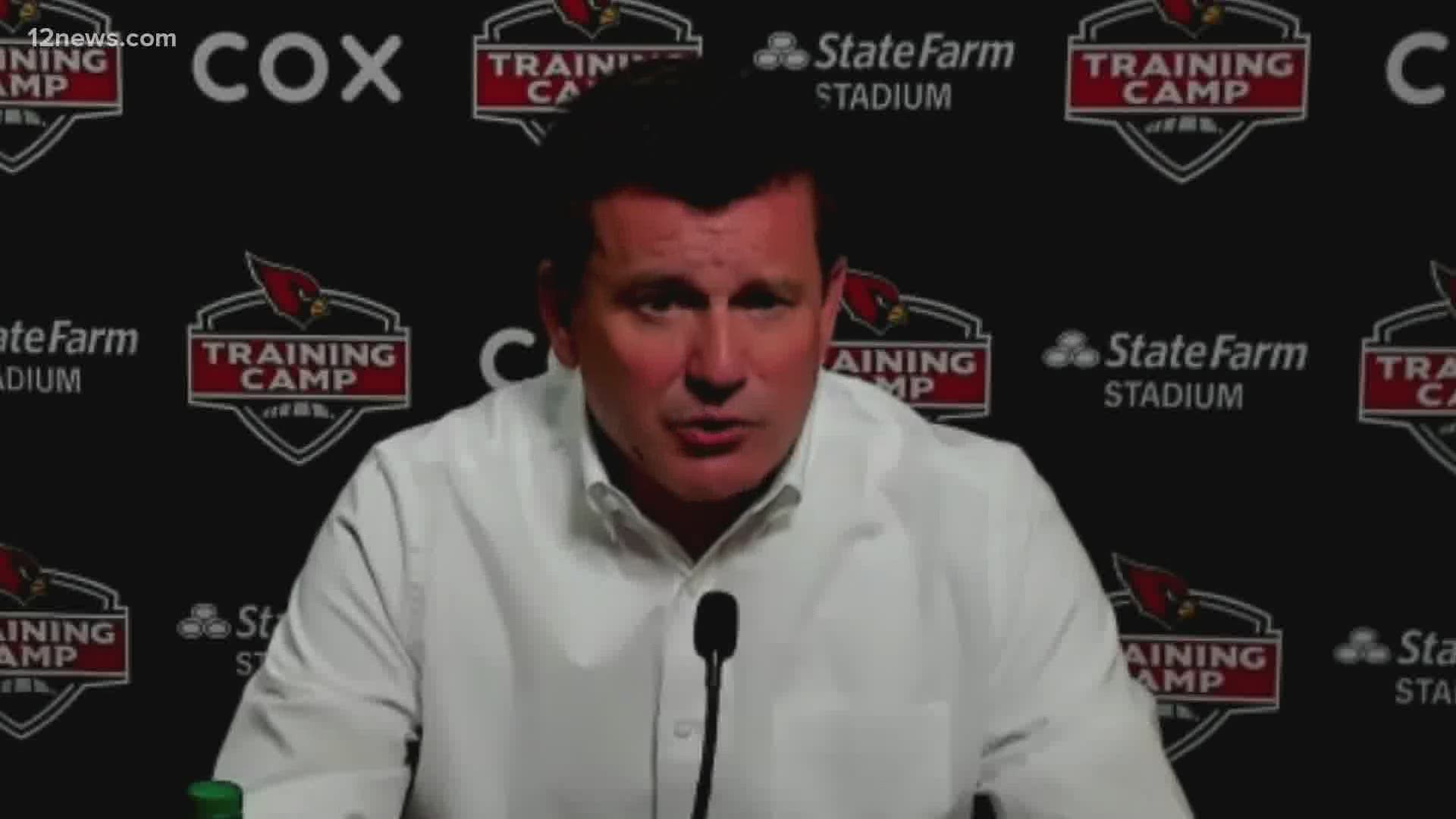 GLENDALE, Ariz. — The start of the NFL season is less than one month away. As the NFL finalizes plans and protocols for a season amid a pandemic, one team owner, Arizona's Michael Bidwill, knows exactly how serious the coronavirus is.

"When an emergency room doctor is holding your hand, you realize this is really serious," Bidwill said. "She said, 'we don't have medical answers for the disease, as you know,' and it scared me."

Bidwill, 55, was traveling on the east coast this summer when he contracted the coronavirus and had to be hospitalized.

"I was in the ICU, isolated, and my symptoms got more severe in the nighttime," he said. "I didn't ever go on a ventilator but I had a severe headache and my temperature kept going to 103 degrees, which is dangerously high."

Bidwill spent five nights in the ICU and he credits the doctors and nurses for potentially saving his life.

"It was surreal," he said. "We've all seen on TV the nurses and doctors lined up clapping when they're rolling you out. That was me getting rolled out that day, and I'm like 'thank you for all the help.'"

He was released, but his coronavirus scare gained him even more perspective on the pandemic. His message for coaches, players and fans is simple.

"I had this virus and I know there are people that have had it and had minor symptoms. That's what I expected to have, but I did not," he said. "It really knocked me down and kicked my butt for about a month. And, you just don't know how your body is going to react to it."

"We've had some fans that have lost their lives," Bidwill said. "It's tragic and terrible and I just ask everybody, take this seriously."

Training camp has already looked much different for the Cardinals. It kicked off last week, with no fans in attendance.

"We all understand that we have a responsibility to each other to make sure that we are following the protocols," Bidwill said.

Last month, the Cardinals told season ticket holders that all previous season ticket sales have been voided and that credits remain on their accounts.

The organization said for the regular season, "it is not clear at this point how many spectators – if any - will be permitted to attend Cardinals home games in 2020."

Bidwill says that he's not ruling out the possibility of having fans at some capacity at State Farm Stadium this upcoming season, but stressed the importance of responsibility surrounding the virus.

"I'm not ruling it out, but obviously we all know the atmosphere here and I think a lot of the things that have been done are important, especially as business leaders, making sure to keep the public safe," Bidwill said. "We're an organization that brings people together and we need to make sure we keep the public safe, but also our players, our coaches, so that we can proceed and play in the games."

Bidwill says he is optimistic that the NFL can complete a full season.

"I think we've got the best possible plans we could at this point. I look forward and I think we've got a good plan heading into the NFL's regular season and I'm very hopeful that it's going to be a fantastic one and we get to February 8th down in Tampa."

The Cardinals kick off the season in San Francisco against the 49ers Sept. 13.