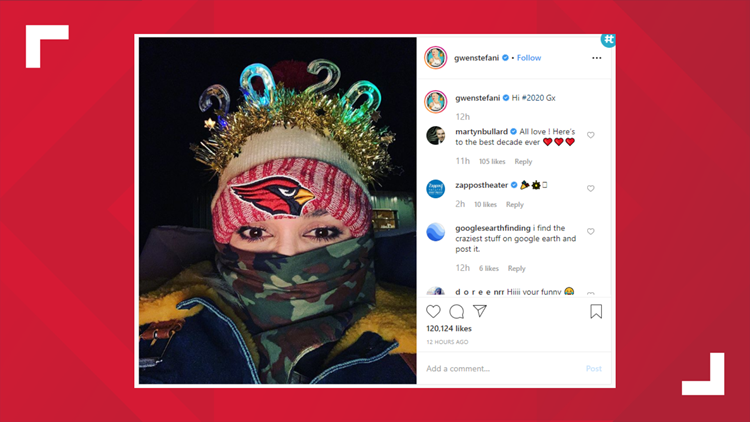 Photo by: Instagram screenshot
Gwen Stefani wore a Cardinals beanie as she celebrated the new year.

PHOENIX — It's a new year and many of us welcomed in 2020 in style, even rock superstar and "The Voice" judge Gwen Stefani. But Stefani took it a little further to show her allegiance to a certain Arizona sports team.

In a recent Instagram post, Stefani can be seen wearing an Arizona Cardinals beanie and a "2020" tiara. It must be cold wherever she was celebrating because she's appeared to be bundled up in a camouflage scarf too.

Since its posting, the photo has received more than 120,000 likes. So her love of the Cardinals has earned internet approval.

But why would Gwen Stefani be wearing a Cardinals beanie? The answer lies with her boyfriend, country superstar Blake Shelton.

Shelton's love for all things Arizona Cardinals has been widely documented. He's even been known to do his own recruiting for free agents to come to Arizona.

So clearly Stefani has adopted the Cardinals as her NFL team of choice. There's plenty of room on the Arizona bandwagon, so welcome aboard!

If you want to share photos of your Cardinals pride, join our official Bird Watchers group on Facebook.

RELATED: Blake Shelton and Gwen Stefani are so in love in their Billboard duet

MORE: Gwen Stefani tweeted all about her stop at Phoenix Sky Harbor