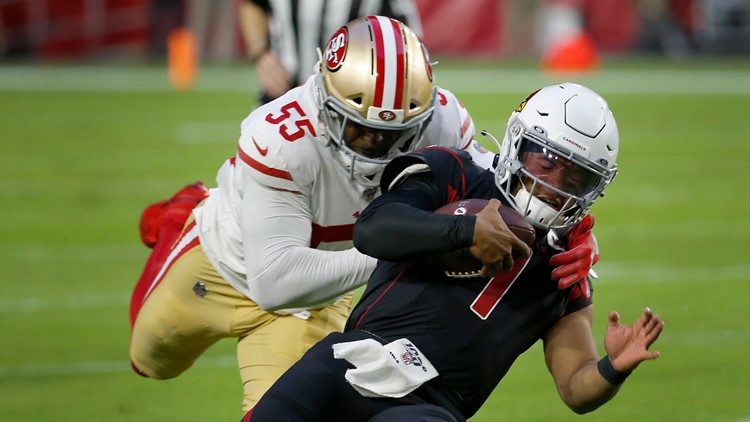 GLENDALE, Ariz — Once again we saw an Arizona Cardinals team Thursday that does not quit. Unfortunately, it wasn't enough to knock off the undefeated San Francisco 49ers, who improve to 8-0 after a 28-25 win in Glendale.

The Cardinals acquired running back Kenyan Drake from Miami at the trade deadline this week and with David Johnson and Chase Edmonds inactive, the former Dolphin made a splash in a hurry.

The game's first play from scrimmage was a 36-yard run from Drake and he scored the first touchdown of the game to give the Cardinals an early 7-0 lead.

Drake would finish with 110 yards on the ground with a touchdown and 52 yards receiving.

The Cardinals stopped the 49ers for a three and out on the next drive but that was about the end of the positives for Arizona in the first half. San Francisco would score three unanswered touchdowns to take a 21-7 lead into half.

Just before the half, the 49ers had 4th and Goal from the 1-yard line and Arizona got the stop, but Kliff Kingsbury had called timeout before the play. The 49ers scored on their second try.

The Cardinals put together an 83-yard touchdown drive on their first possession of the second half completed with a Kyler Murray to KeeSean Johnson touchdown connection. This made it 21-14.

A rough drive from the Cardinals defense, especially All-Pro corner Patrick Peterson, ensued on the following 49ers possession, which was capped off with a 21-yard touchdown throw from Jimmy Garoppolo to Dante Pettis, Garoppolo's fourth of the game. This made it 28-14.

The Cardinals made it 28-17 on a Zane Gonzalez field goal with just over nine minutes remaining in the game.

Arizona was able to get the ball back with more than five minutes on the clock. Kyler Murray found Andy Isabella for a streaking 88-yard touchdown.

A two-point conversion made it 28-25 with plenty of time left.

On the following 49ers possession, San Francisco converted on a 3rd down and 2, but Kingsbury challenged the spot and lost the challenge, losing a timeout. But, the two-minute warning was still in play.

On 3rd down and 4, the 49ers were flagged for a false start making it 3rd and 9. Garoppolo found tight end Ross Swelley for a first down, ending the game.

Garoppolo finished with 317 yards and four touchdowns and the Cardinals gave up 413 yards of total offense (250 of those yards were recorded in the first half).

Kyler Murray threw for 241 yards on 17 completions with two touchdowns. He also rushed for 34 yards.

The Cardinals move to 3-5-1 on the year. They play Sunday Nov. 10 against former head coach Bruce Arians in Tampa Bay (2-5).