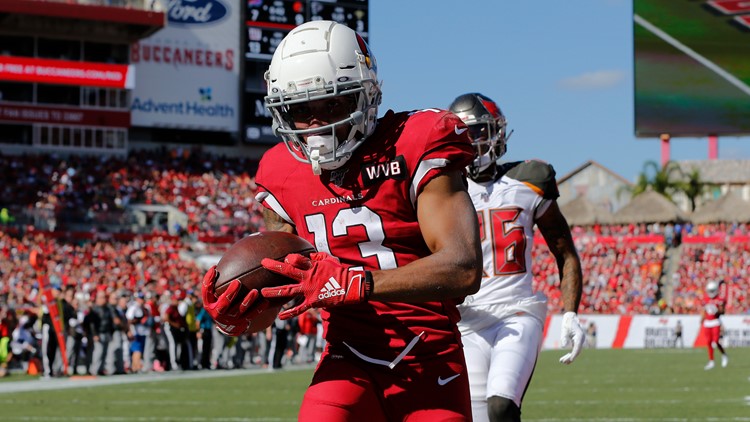 TAMPA, Fla. — The Cardinals had the game in their hands late in Tampa Bay territory Sunday but threw it away, picking up their third straight straight loss.

After two field goals earlier in the game and two 10-6, the Cardinals offense finally found the end zone. Set up by an incredible first down catch from Larry Fitzgerald, Kyler Murray found Christian Kirk for the first time this year on a 33-yard strike to give Arizona a 13-10 lead.

The Bucs were able to answer before the half to take a 17-13 lead.

After a Tampa Bay field goal, Kyler found Christian Kirk for a second time, this one a 69-yard bomb. This tied the game at 20-20.

Early in the fourth quarter, Tampa had a long field goal attempt to take the lead and kicker Matt Gay missed the attempt. But, a flag was called for offside on Patrick Peterson giving Tampa another shot and then the lead.

Down 23-20, the Cardinals had a fourth down, but ran a fake punt and Andy Lee found Pharoh Cooper for a first down.

A long pass interference call drawn by Larry Fitzgerald led to yet another Christian Kirk touchdown to give Arizona a 27-23 lead.

With just under six minutes left, Cardinals safety Budda Baker recovered a fumble to give Arizona the ball back.

Kyler Murray gave the ball back to Tampa Bay on an interception in the plays following.

With under two minutes to go, Tampa Bay ran it in from short to take a 30-27 lead.

On 4th and 5 with 30 seconds to go, Murray threw to Christian Kirk, who drew a defensive pass interference call.

A holding call on the Cardinals following play backed Arizona up again.

On the final play of the game, Murray threw the ball up to Pharoh Cooper and wanted a pass interference call but did not get a flag. Former Cardinals head coach Bruce Arians came away with the win.

Bucs quarterback Jameis Winston threw for 358 yards and a touchdown and two interceptions.

The Cardinals (3-6-1) play at undefeated San Francisco next week.