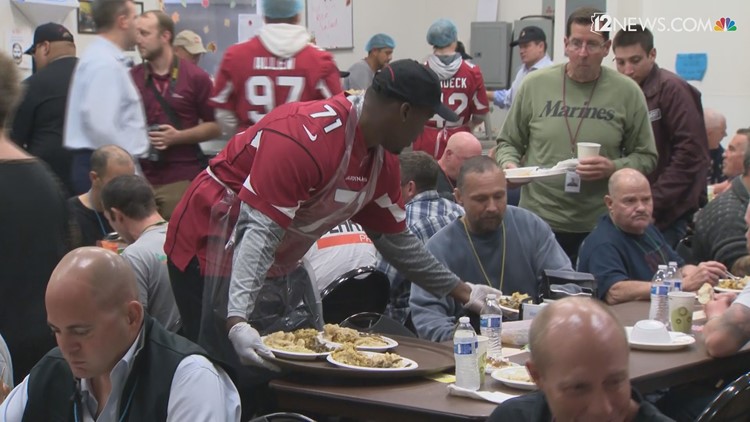 Photo by: 12 News
The Cardinals handed out meals, some Cardinals gear and spent time talking and sharing stories with people at the Mission.

PHOENIX — For nearly two decades, the Arizona Cardinals have continued a tradition of serving Thanksgiving meals to hundreds in need at the Phoenix Rescue Mission.

“I do it every year,” said Michael Bidwell. “I feel like we all get more out of it than we give and the people here are people. Some of them are down on their luck and this is a wonderful place.”

The Phoenix Rescue Mission is a nonprofit mission that provides Christ-centered, life-transforming solutions to people facing hunger and homelessness.

“The Arizona Cardinals are a blessing to come in and they’re great with the guys when they do come in,” said Todd Smith, program director for the men’s ministry. “Our whole ministry is about giving guys hope. A lot of these guys were throwaways in the community and they come to our gate they have nothing and we’ve just been able to rebuild them.”

The Cardinals handed out meals, some Cardinals gear and spent time talking and sharing stories with people at the Mission.

“I was here last year. I had a great time, got to hear some great stories and looking to hear some more tonight,” said Gardeck.

“Being a rookie I just wanted to be able to kind of meet with the community and immerse myself being an East Coast kid coming all the way out West,” Zach Allen added. “It’s been a lot of fun talking to them and seeing how passionate they are about us and just very fortunate to be in a city where they love football.”

Before the night was over, Michael Bidwell said he had a message for Arizona fans.

“Our message to fan is, see if you can do something and give back to the community the next several weeks and continue it on through the new year.”