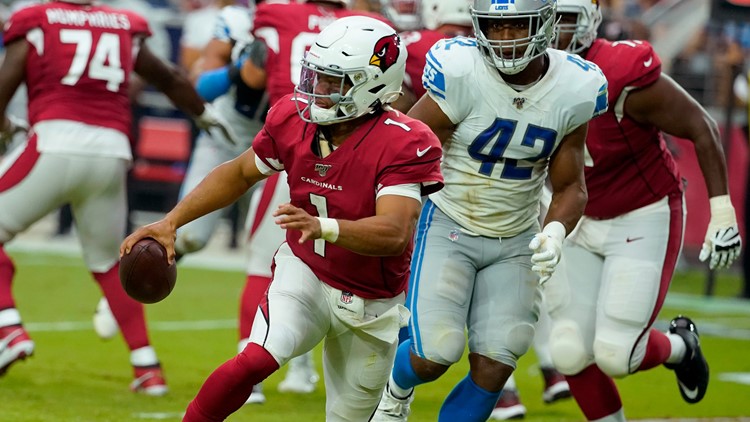 Cardinals come all the way back, tie Lions in overtime 27-27

GLENDALE, Ariz — It was a valiant effort from rookie quarterback Kyler Murray and the Arizona Cardinals Sunday afternoon in State Farm Stadium as they staged an 18-point comeback to send the game against Detroit into overtime.

After each team made field goals in overtime, the two squads would capture the first tie game of the NFL season 27-27.

Detroit began the game up 17-0 as Kyler Murray and Kliff Kingsbury's offense looked stagnant and frustrated.

On Murray's second NFL possession he threw his first interception when he was picked off by Tracy Walker on a third down.

Thanks to a muffed punt recovered by Trent Sherfield, the Cardinals were able to scrounge up three points and head into half down 17-3.

The Cardinals would add another field goal to make it 17-6 but Detroit scored another touchdown on a long third down with 14 yards to go when Matthew Stafford found rookie tight end T.J. Hockenson in the end zone.

Hockenson recorded the most yards ever by a rookie tight end in their debut game. He finished with 131 yards on six receptions.

The Cardinals made it into Lions territory once again early in the fourth quarter but had to settle for another field goal to make it 24-9.

After a defensive stop, the Cardinals had the ball again and finally, Kyler Murray got his first NFL touchdown and the team's first of 2019. He found David Johnson over the top for a 27-yard score to make it an 8-point game 24-16.

The Cardinals were able to stop Detroit with a little over two minutes on the clock. A blocked punt that only went 11 yards gave Arizona quality field position.

Murray and the Cardinals moved the ball down the field once again.

Back-to-back 10-yard gains on runs by Murray and David Johnson put the Cardinals inside the 20. A throw to Damiere Byrd put Arizona inside the 10 with 52 seconds left.

A personal foul on Detroit on the following play put Arizona on the 4-yard-line. Murray found Larry Fitzgerald for a touchdown on the next play to make it 24-22. Murray found Christian Kirk for the 2-point conversion to make it a tie game with 43 seconds on the block and the game went into overtime.

After winning the toss, Arizona started with the ball.

A 45-yard completion from Murray to Fitzgerald gave Arizona good field position. But they would eventually settle for a field goal, giving Detroit a chance to answer.

Detroit began it's next drive with a 21-yard throw and was in Cardinals territory a play later. A 23-yard strike from Stafford to Marvin Jones put the Lions inside the 20.

A Cardinals stop forced Detroit to settle for a field goal and tie the game 27-27.

Murray converted two 3rd downs on the following drive but game up short on a 3rd and 7 on the Detroit 44-yard-line. With 1:10 left, the Cardinals were forced to punt.

Detroit ran out of time on the final possession and the game ended in a 27-27 tie. Cardinals CB Tramaine Brock dropped an interception that would have likely given the Cardinals a chance for a game-winning field goal.

Quarterbacks drafted No. 1 overall are now 0-11-1 in their debuts since 2003 with Kyler Murray's tie on Sunday.

Arizona takes on the Baltimore Ravens next week in Baltimore after the Ravens defeated the Dolphins in Miami Sunday 59-10.