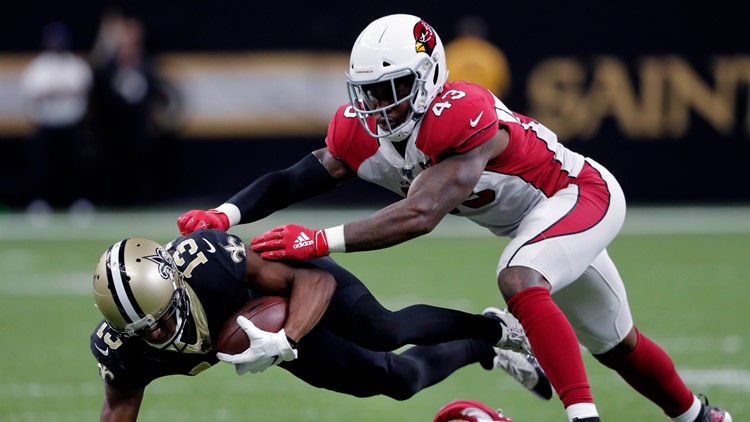 PHOENIX — It's Halloween and the Arizona Cardinals are hungry -- but not for candy.

The Cardinals are taking on the San Francisco 49ers at State Farm Stadium for Thursday Night Football.

The team has won eight straight in its division rivalry with San Francisco.

However, this year's 49ers are undefeated -- so the Cardinals are looking to put their first L in the team's candy bucket.

The Cardinals have run into problems of their own with a shortage of running backs.

The team acquired Kenyan Drake from the Miami Dolphins for a conditional sixth-round pick in 2020 on Monday, giving the Cardinals a healthy backfield option heading into Thursday's game.

The 25-year-old Drake is in his fourth season and gives the Cardinals an experienced player at the banged-up running back position.

"From what I've heard, he's a smart player and he's eager to learn," Arizona coach Kliff Kingsbury said. "We'll give him enough to where he can execute at a high level. We're excited — he's an explosive back, can do it all out of the backfield and I know he's fired up to get this opportunity."

Starter David Johnson has missed most of the past two weeks with an ankle injury and backup Chase Edmonds injured his hamstring in the team's 31-9 loss to the New Orleans Saints on Sunday.

If you're spending your Halloween night at State Farm Stadium, you might want to get on the roads early to avoid any traffic before the 5:20 p.m. kickoff.

Traffic will likely be backed up in both directions on the Loop 101 near the Cardinals Way exit for hours before and after the game.

Drive safe and enjoy the game!

Tune to Cardinals Locker Room on 12 News after Sunday Night Football for a full recap of the game.