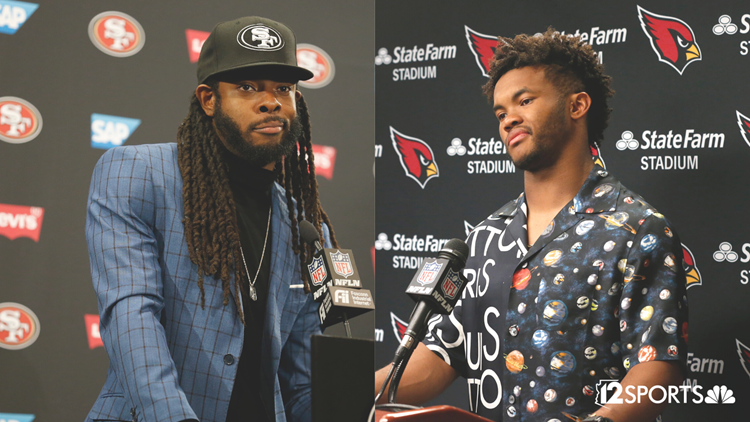 SANTA CLARA, Calif. — The San Francisco 49ers continue to roll in the 2019 NFL season as they improved to a 10-1 record Sunday night in a rout of the NFC North-leading Green Bay Packers 37-8.

After the game, veteran 49ers cornerback Richard Sherman got a little defensive of his quarterback, Jimmy Garoppolo as he said his team has an "obligation" to fight for Garoppolo.

"You hear some of the things said about him and it's frustrating, because we see him every day, we see what kind of work ethic he puts in, the hours that he puts in," Sherman said. "The guys looks for no credit."

Garoppolo has a 68.8 completion percentage this season, ranking sixth among starting quarterbacks. His 20 passing touchdowns this season rank 5th among NFL QBs and he's led his team to the best record in the NFL through 11 games.

Sherman continued and even pulled in Cardinals quarterback Kyler Murray into his rant.

"And then you have people nitpicking," Sherman said. "We run for 300 yards, you're like 'well [Garoppolo] didn't throw a lot.' Then he throws for 400 and they're like, 'well I think he got outplayed by Kyler Murray.' And Kyler Murray barely had 100 yards passing."

"You can appreciate being good enough that people got to make excuses for why you're good," Sherman said about Garoppolo.

Meanwhile, Kyler Murray is wondering why he got roped into this conversation, as one Twitter user responded to the video.

Murray replied to that tweet in agreement saying, "Lol facts."

While Murray and the Cardinals weren't able to defeat the 49ers in two close games this year, the offense performed well against the NFL's top defense, scoring 25 and 26 points in each game respectively.

Murray threw for four touchdowns and no interceptions in those two games and ran for another.

As AZCardinals.com writer Kyle Odegard pointed out, Kyler Murray's passer ratings against the 49ers in two games this season rank first and second among QBs vs. San Francisco this season, and it's not very close.

It's very possible Richard Sherman is watching too many debate shows, but it's not going to be ignored that a rookie quarterback in a first-year system under a first-year coach has performed the best of any quarterback the 49ers have faced this year. And those include Russell Wilson and Aaron Rodgers.

Both Cardinals, 49ers games came down to the wire this season between two teams, on paper, that aren't so evenly matched.