It's the strongest statement yet from the 25-year-old regarding the Black Lives Matter movement. 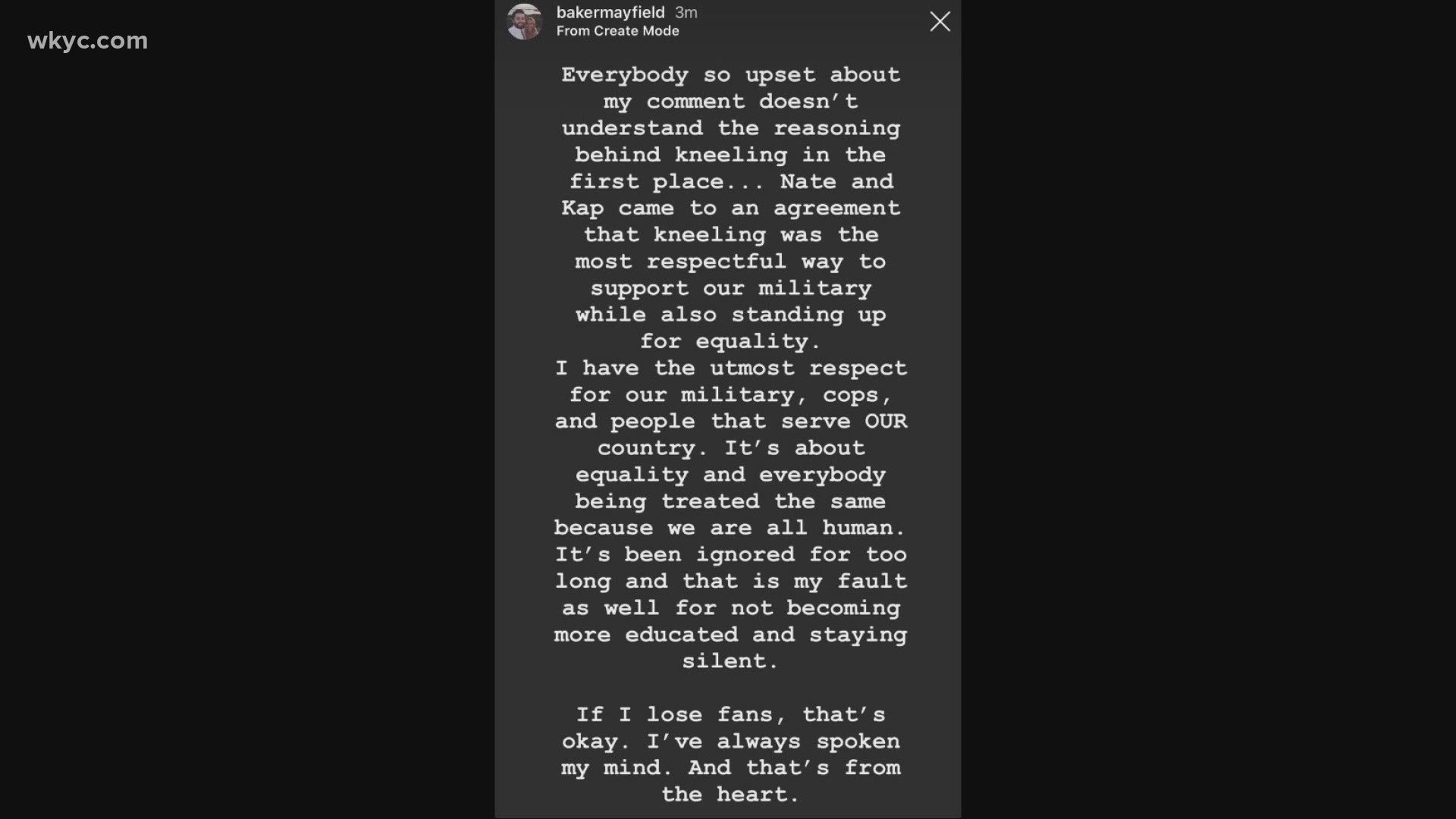 CLEVELAND — The Browns are set to start their season on-schedule this fall, but expect things to look a lot different.

Not only will social distancing measures (such as a possible lack of fans) be in place due to the coronavirus pandemic, but several players will likely publicly protest racism and police brutality as part of the Black Lives Matter movement. That will almost certainly include kneeling during the pregame playing of the national anthem, something seen as quite taboo just a few years ago.

The players kneeling so far have almost exclusively been black, with white teammates almost exclusively choosing to remain standing. However, that could very well change when teams take the field again in the matter of months, at least if one notable player's recent comments are any indication.

Baker Mayfield posted a video of himself working out on Instagram Saturday when in the comments user @ohiog1 instructed Cleveland's quarterback to "Please tell Browns fans you're not going to be kneeling this season." In a pointed response, Mayfield left no doubt of his intentions: "Pull your head out. I absolutely am."

Following the initial wave of his comments hitting social media, Mayfield offered a lengthier message on his IG story, saying he has "the utmost respect for our military, cops, and people that serve OUR country" and that those criticizing him don't "understand the reasoning behind kneeling in the first place."

"It's about equality and everybody being treated the same because we are all human," the 25-year-old wrote. "If I lose fans, that's okay. I've always spoken my mind. And that's from the heart."

Mayfield's remarks represent a quick and drastic shift regarding the NFL's view of kneeling during the anthem, a practice that likely got its originator—former San Francisco 49ers QB Colin Kaepernick—blackballed from the league. The reaction to Kaepernick and others who joined him was mixed, with many accusing them of disrespecting the flag and the military.

Kaepernick denied those claims, saying the protest was meant to bring attention to the disproportionate killings of black men at the hands of police officers as well as ongoing racism in the United States. The NFL back in 2018 put certain policies in place that largely made kneeling a thing of the past, but following the recent death of George Floyd and subsequent international outrage, the conversation has quickly shifted.

Players across the country have been speaking out about race and police brutality, and Commissioner Roger Goodell even apologized on behalf of the league for not doing enough to address such issues. Even some who previously condemned kneeling, such as legendary Saints QB Drew Brees, have changed their tune and declared the protest "was never about the flag."

This is not the first time the kneeling issue has made its way to the Browns locker room: Back in 2017, several players knelt during the playing of the anthem before a preseason game, prompting backlash among fans and local law enforcement and even a talking to from the immortal Jim Brown. The team began standing again, but 21 knelt once more during the regular season after President Trump ripped the practice at a rally and referred to them as "sons of b---hes."

Trump—who has been quite vocal on Twitter during the protests against Floyd's killing—again lambasted the NFL today, stating he won't be watching if players begin kneeling en masse again. Ironically, he was responding to a tweet from Ohio U.S. Rep. Jim Jordan regarding the U.S. Women's National Soccer Team now being allowed to kneel during the "Star-Spangled Banner."

It is unknown how many Browns players will join Mayfield in taking a knee when the season begins.

JIMMY'S TAKE: Browns seem to be 'in very good hands' under Kevin Stefanski

BAKER MAYFIELD: 'It's time to do our thing instead of talking about it'