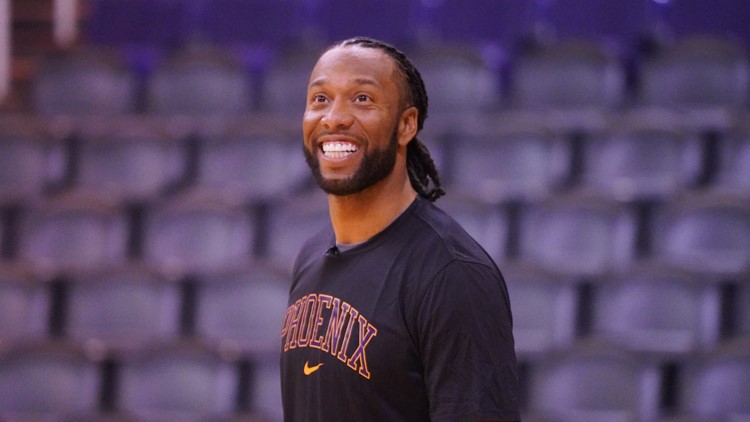 Larry Fitzgerald buys a minority stake of the Phoenix Suns

PHOENIX — It looks like Arizona Cardinals receiver Larry Fitzgerald is adding "NBA owner" to his resume. According to a release from the Phoenix Suns, Fitzgerald recently bought a minority stake in the NBA franchise.

The terms of the purchase were not immediately disclosed. The Suns franchise was worth an estimated $1.5 billion in 2019, according to Forbes.

The Cardinals receiver is the second active NFL player to have an NBA ownership share. Green Bay's Aaron Rodgers owns a stake in the Milwaukee Bucks, according to Adam Schefter.

“Larry has been a great ambassador for our organization for years. He is an Arizona icon and a businessman, passionate philanthropist, and leader,” Suns managing partner Robert Sarver in a release. “He brings a unique perspective from outside basketball but still grounded in sport, and we welcome him as a valued partner and investor.”

Since joining the Cardinals, Fitzgerald has been seen regularly sitting courtside at Suns games and is a Valley favorite among sports fans.

“I have a special place in my heart for the Phoenix Suns and Mercury, and I have a great deal of respect for Robert,” said Fitzgerald in a release from the Suns. “He has become a dear friend and a trusted confidante. He is a big part of why I am making this commitment.”

12 Sports' Chierstin Susel got the reaction on the news from Suns Head Coach Monty Williams.

Fitzgerald is currently Arizona's all-time leader in catches, receiving yards and touchdown catches. He also just recently signed a one-year extension with the Cardinals to return to play in his 17th season with the team.

RELATED: Larry Fitzgerald to return to Arizona Cardinals for 2020 season

MORE: Gwen Stefani shows off her Cardinals pride while ringing in the new year