For the first time since resigning with the Suns, Chris Paul talks about coming back and his charity bowling tournament 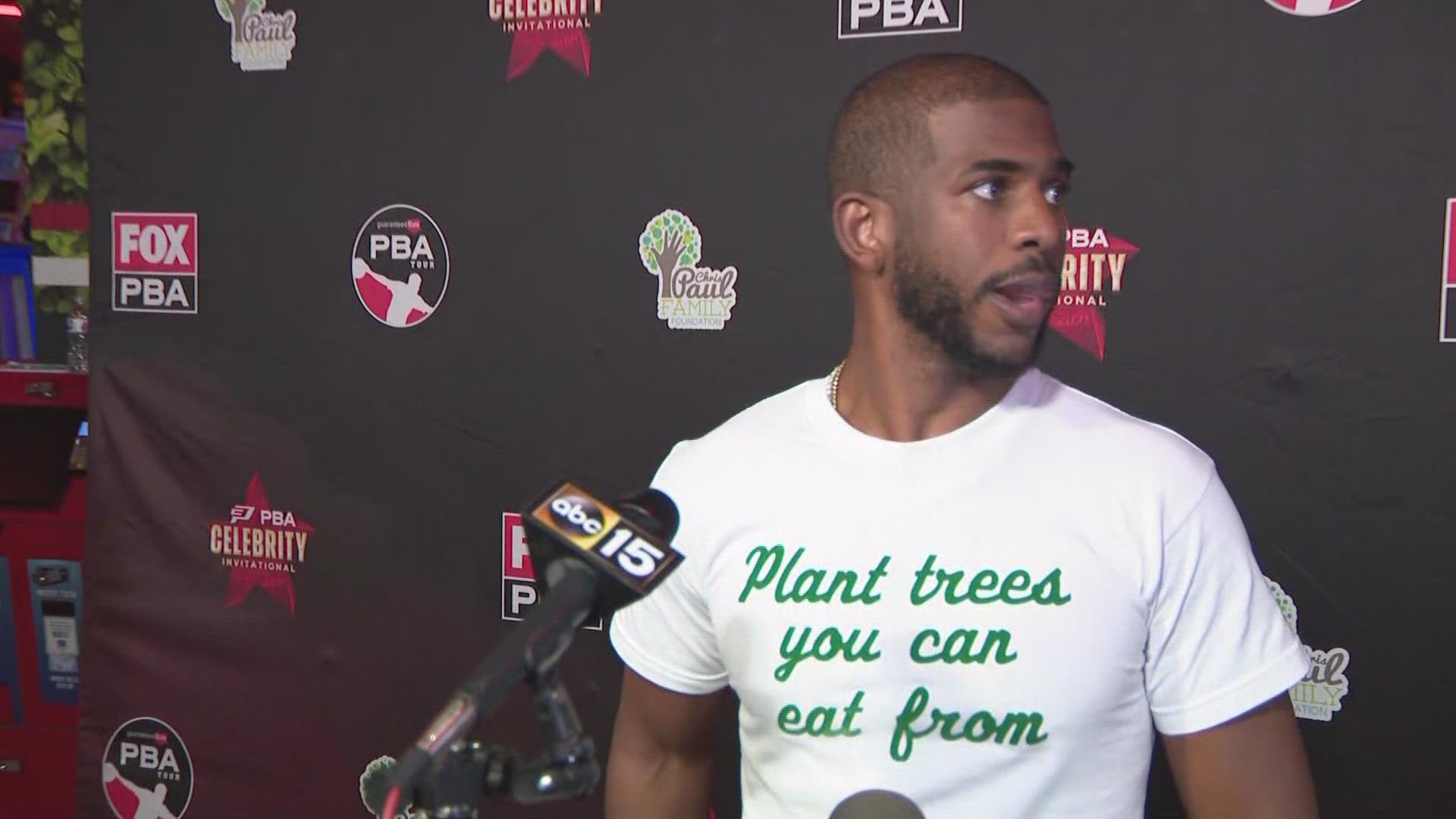 GILBERT, Ariz. — Days ahead of the Phoenix Suns opening training camp for their new season, their 11-time All-Star point guard Chris Paul is back in the Valley. However, he’s not here to ball just yet, but instead to bowl.

“I’m excited,” Paul said. “We usually do this with a lot of people here watching and stuff like that, but I get it’s a different time right now, but I’m grateful. It’s always for a great cause, for our foundation and for the guys who show up, I’m greatly appreciative.”

The tournament benefited the Chris Paul Family Foundation, which works to positively impact people and families by making education, sports and life more equitable for all.

But the question remains, why bowling?

“My dad, when I was growing up, he was in all types of bowling leagues,” Paul said. “Me and my brother, we were kids sitting in a smoky bowling center ordering french fries and stuff all day every day. And then when I was in high school, my dad bought a bowling ball for me. He bought one for me and one for my brother. And then the whole time I was in college, anytime I wasn’t in class or didn’t have practice, I was bowling.”

Paul also loves bowling because it is a sport the connects everyone.

“Bowling is one of those things that it sort of connects everybody and it’s timeless,” Paul said. “I had an uncle who passed away a couple years ago who at 81 years old was still bowling, and there are not too many sports where you can say that. I hope to still be hooping at 81, but don’t bet on it.”

.@12SportsAZ caught up with Chris Paul tonight at his 11th @cp3 PBA Celebrity Invitational. It airs nationally on October 17th. Chris talks about his love for bowling, his love Phoenix, and the pros of having @K1 on his fantasy football team. See more Sunday on #12SportsTonight. pic.twitter.com/hfYPCA3N4W

But Paul’s first love remains basketball, and he is excited to get back on the court with his team, after resigning with the Suns this summer on a 4-year, $120 million deal.

“I’m excited to be back here,” Paul said. “It was a short offseason, probably the shortest one that any of us on our team’s ever had, but to get back in the gym, see the guys, I think we’re excited about getting this thing started again.”

The Suns had one of the best seasons in team history last year. They won 51 games in a shortened regular season, got the 2nd seed in the Western Conference Playoffs, and made it to the NBA Finals before coming up just short against the Milwaukee Bucks.

However, Paul says this season could be more exciting than the last.

“Last season was fun, but I think this season will be even better,” Paul said. “We started off last season without the fans, so, it was three-quarters of the way through the season when I finally got the chance to see what the Phoenix fans are like. So now that we’ll get a full season, we’ll get that energy. I’ll get a chance to see more than just my house. I’m excited about everything.”

The Suns open training camp on Monday, Sept. 28th, and open preseason play on Monday, Oct. 4th on the road against the Sacramento Kings.

The regular season tips off on Wednesday, Oct. 20th when the Suns host the Denver Nuggets at Footprint Center in downtown Phoenix.

You can watch the 11th CPE PBA Celebrity Invitational on Sunday, Oct. 17th on Fox.

Stay up to date with the latest news on the Phoenix Suns with the Locked on Suns podcast. It's available anywhere you listen to podcasts.