As the Suns begin training camp, we're catching up with their head coach and hearing about his famous sayings and how he has changed after last season. 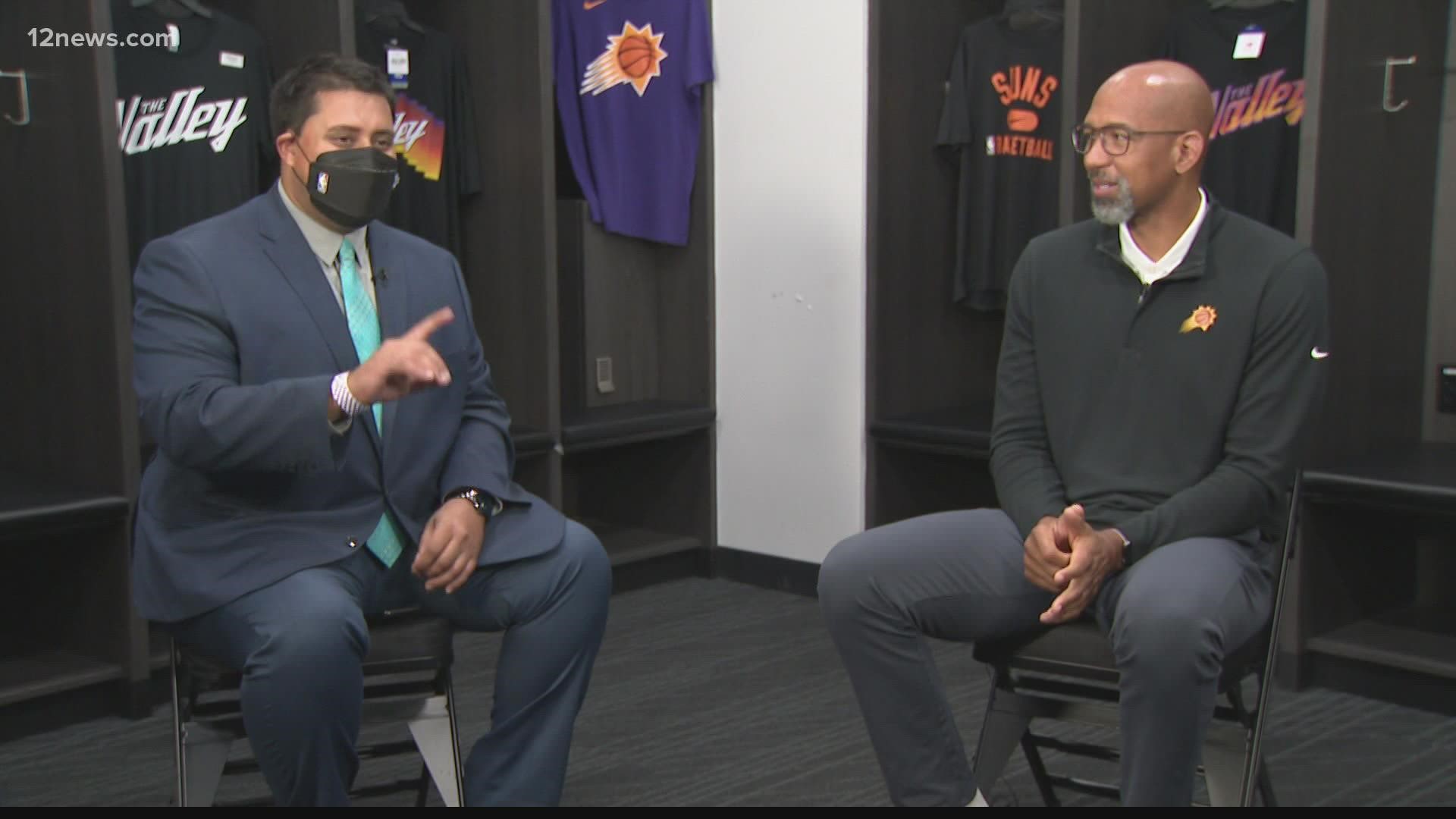 PHOENIX — The Phoenix Suns are back in training camp for the 2021-22 season, just a couple of months after a Western Conference championship and a trip to the NBA Finals.

Ahead of the Suns starting another quest for a championship, 12 News caught up with the team’s head coach, Monty Williams.

Williams is all about family, and our conversation started by talking about his.

“We have a 10-minute rule after every game,” Williams said. “I’ve got 10 minutes to talk about whatever I saw in the game. I can lose it, I can pat him on the back, but I’ve got 10 minutes and once that 10 minutes is up, I take him to get something to eat and we go home. I had to put that rule in because I was just too much. My oldest son, I could see it on his face. Before the 10-minute rule, I was going to lose him because he was either going to run away or punch me in the mouth because he was getting tired of it.”

Williams also talked about what it means to be the head coach of this franchise, saying he wasn’t sure he would ever get to be a head coach again after his stint in New Orleans from 2010-15, and that getting to bring the Suns back to prominence has been special.

“To be a part of a rebuild, kinda, more of a retooling, when you have a guy like (Devin Booker), you don’t really rebuild, you just kind of put people around him, and then to have (DeAndre Ayton) sitting right there ready to blossom, to do it with (Suns GM James Jones), to be in a position to be a part of helping people view (Suns owner Robert Sarver) the way that he needs to be viewed, I take that seriously,” Williams said. “I needed the organization and this city more than it needs me.”

Losing to the Milwaukee Bucks in this past season’s NBA Finals was tough for the Suns’ head coach, but Williams says the memories of going through that run with the fans in the Valley was unforgettable.

“The fanbase here has wanted a team to rally around and support and root for,” Williams said. “I hope that we have given them that. Now that some of the restrictions have lifted, you get to go out a little bit more, and even though you have a mask on, people can kind of see (and say) ‘I think that’s the coach!’ Those are cool moments when you’re out in the public and an older person will walk up to you or you’re at church and an older person will talk about what it means to have a team that they’re proud of.”

Williams also talked about how he is different heading into this new season.

“When you go through the deep hurt, whether it’s basketball (or) life in general, it expands your capacity to grow,” Williams said. “I’m hopeful that that happened for me and our team. It’s probably helped me to let my guard down a little bit more because when you go that far, you realize it’s really not about you, it’s about everybody around you. That allows for you to be the best version of yourself.”

Williams is well known for his sayings, such as “Everything you want is on the other side of hard,” and “Well done is better than well said.” He spoke about what those sayings mean to him and if he has any new ones for this season.

“It’s nothing that I choreograph,” Williams said. “I ask God to help me with the words that I say because they’re important. I don’t want my words to be a detriment to anybody. It’s something that I pray about that I’d say the right thing at the right time to the right person. But we are going to preach excellence this year. When I first got here, we talked about the conditioning test and how we all needed to condition ourselves to improve. And then last year it was ‘Relentless.’ And then this year it’s going to be ‘Excellence.’ The ability to do common things uncommonly well for long periods of time.”

Williams also spoke about what it was like being on the team flight back to Phoenix after losing Game 6 of the NBA Finals to the Bucks.

“Every player that I talked to, they just kept talking about the details,” Williams said. “(Devin Booker) came to the back of the plane where the coaches were, and he had that look on his face that was like mine. We got so close, we were so tired, and I asked him, I said, ‘Young buck, what did you learn?’ I think he said verbatim, ‘The details, Coach.’ And that’s stuck with me. You have to take those things seriously every day. To do that, you have to approach it with a level of excellence, not perfection, but excellence. The next level of who you are as a player and as a person and that’s my goal this year is to try to help us get to that next level.”

The Suns will start their season on October 20th, with a home game against reigning NBA MVP Nikola Jokic and the Denver Nuggets, who they swept in the Western Conference Semifinals last season. Tipoff at Footprint Center in downtown Phoenix will be at 7 p.m. 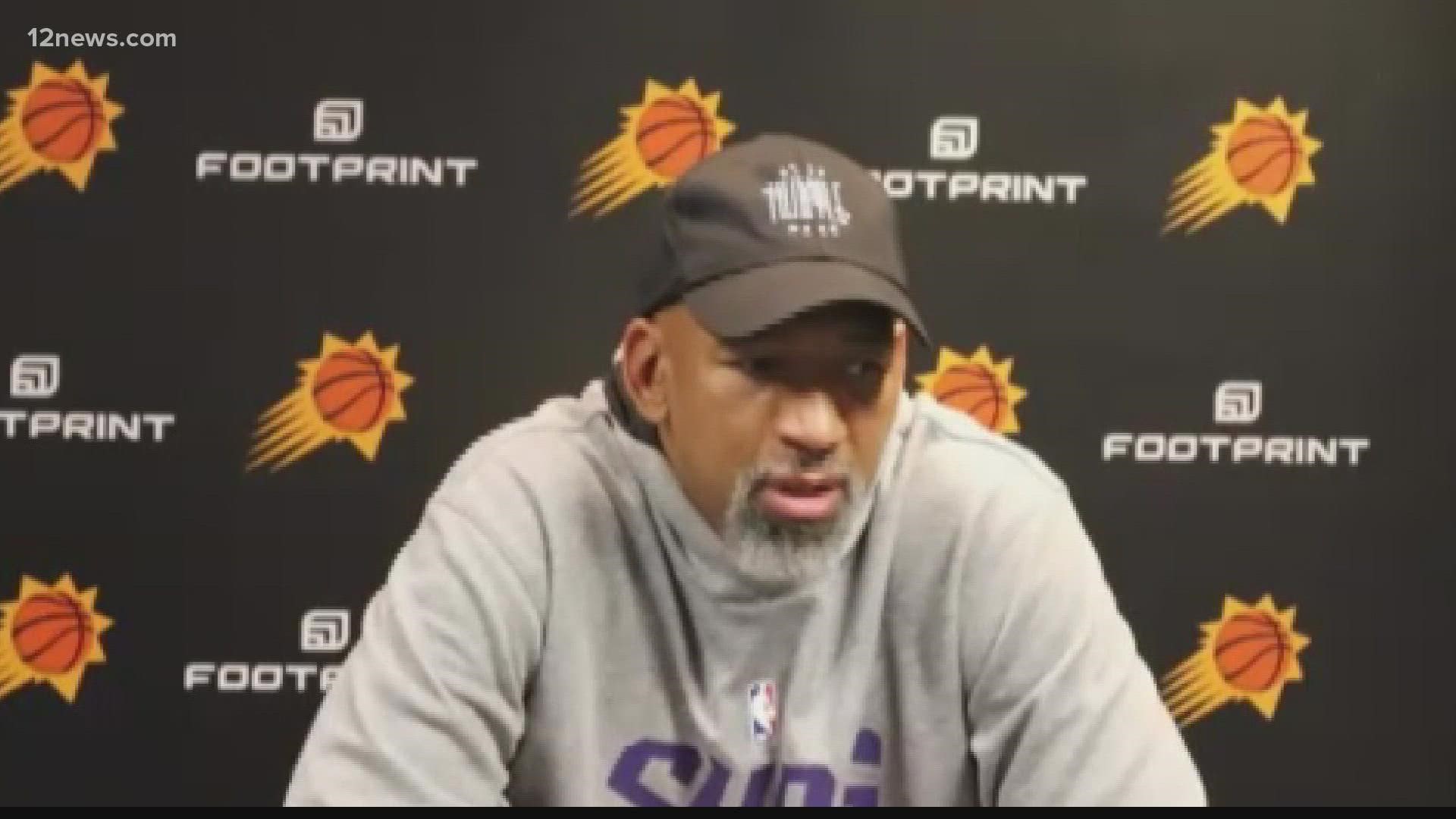