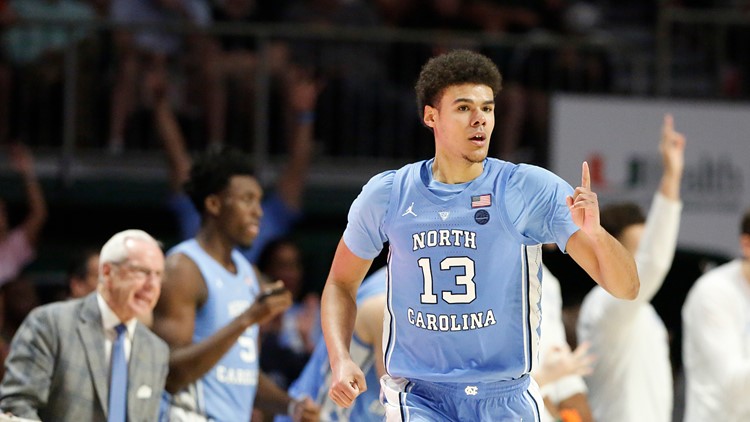 Photo by: AP
North Carolina guard Cameron Johnson gestures after scoring during the second half of an NCAA college basketball game against Miami on Saturday, Jan. 19, 2019, in Coral Gables, Fla. (AP Photo/Brynn Anderson)

PHOENIX - After trading the No. 6 overall pick to Minnesota for forward Dario Saric and the No. 11 pick, the Phoenix Suns drafted Cameron Johnson out of North Carolina at 11th overall.

After having the NBA's second worst record last season, the Suns were selected to get the 6th pick in the NBA Draft Lottery in May.

The Suns initially showed interest in trading the pick for a veteran point guard, but settled for a starting-level power forward in Dario Saric and a pick swap on draft day.

Cameron Johnson, who was the oldest player in the draft at 23 years old, started his collegiate career at Pittsburgh and played his final two seasons at North Carolina under Roy Williams. The 6-foot-9 small forward averaged 17 points per game last season as well as six rebounds.

Additionally, Johnson shot 46% from behind the three-point line and 62% from the field.

The Suns made another deal on draft day to trade their second round pick, No. 32 overall, and forward T.J. Warren to create cap space. Warren, who averaged almost 19 points per game over the last two seasons, had three years and $35 million left on his deal.

As of now, the Suns will have around $20 million in cap space, if they keep forward Kelly Oubre Jr., to likely go after a starting-level point guard in free agency when it starts in July.