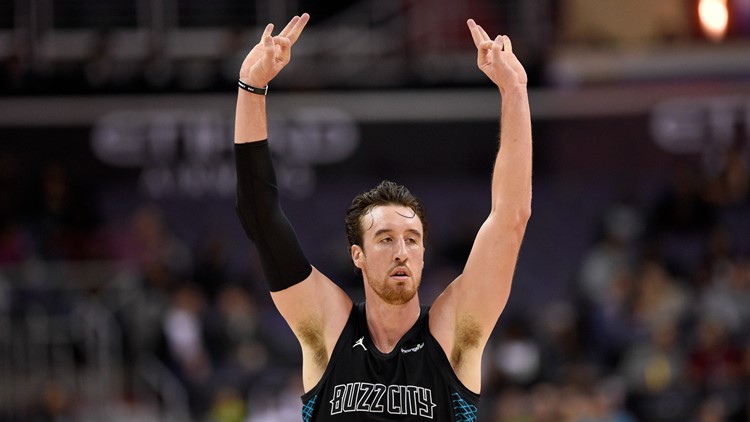 Photo by: AP
Charlotte Hornets forward Frank Kaminsky (44) gestures after his three-point basket during the second half of an NBA basketball game against the Washington Wizards, Friday, Feb. 23, 2018, in Washington. (AP Photo/Nick Wass)

PHOENIX - No, the Suns didn't get D'Angelo Russell or sign anyone quite close in potential and/or talent yet, but the team did add a couple free agents so far in free agency that will aid in filling some key positions.

We should all agree that's a correct, fair, lukewarm statement.

The Suns snatched up the 6th- (maybe 7th, at least 8th) best point guard, arguably, on the market in Ricky Rubio on Sunday, locking the Spaniard in for three years at $51 million.

And honestly, fans should be more excited about that.

Rubio, a now-noted better off the court influence than D'Angelo Russell (reportedly), will start in the backcourt alongside Devin Booker.

The point guard position in Phoenix has had plenty of turnover(s) through the past several years and now the Suns might actually find a few years of consistency with Rubio, who averaged about 13 points and six assists for the Utah Jazz last season as well as the season before.

But the Suns also made an underrated move on Monday, grabbing their man, from 2015, Frank Kaminsky. Woj reported the Suns plan to sign the 7-foot, 26-year-old to a two-year, $10 million deal.

The signing had 12 Sports senior producer Matt Johnson fondly flashing back to June 25, 2015. Kaminsky, 22 at the time, was coming out of an impressive senior season at Wisconsin and would be drafted that day No. 9 overall by the Charlotte Hornets, four selections ahead of the Suns at 13, a team that won 39 games that season (1 less win than the past two seasons combined) (sorry).

But if Kaminsky would have dropped or the Suns would have successfully traded up in the draft? You would have never ever seen Devin Booker in a Suns jersey.

There weren't just an abundance of media reports and Chad Ford mock drafts that showed everything pointing to the Suns wanting Kaminsky. There were fans who wanted the big man, too.

The above tweets were sent during Wisconsin's run to the NCAA Championship game so it's not exactly fair.

To be fair, now, there were also plenty of fans that absolutely did not want Kaminsky.

Christian still has #Suns in his Twitter bio, so bullet dodged @Suns.

Anyway, so you get the point, which is this: let's let ourselves be impressed by this move by Sarver's Suns, waiting to really pull the trigger on a now-experienced Kaminsky five off-seasons later AND getting him at decent value while already having Booker on the roster. It's like the Suns had two top-13 picks in 2015 and they're both still on the roster. Thumbs up, Ryan McDonough.

Let us also give a clap clap to the organization, or at least to the other teams that prevented the Suns from trading up in 2015. If not for that, Phoenix wouldn't have a 22-year-old entering his fifth NBA season going for his fourth-straight year averaging 20+ per game and the team would have lost at least two fans.