Cameron Cox sat down with Jerry Colangelo, who talked Monty Williams and his role in the hire, Robert Sarver and why he's optimistic about the Suns' future. 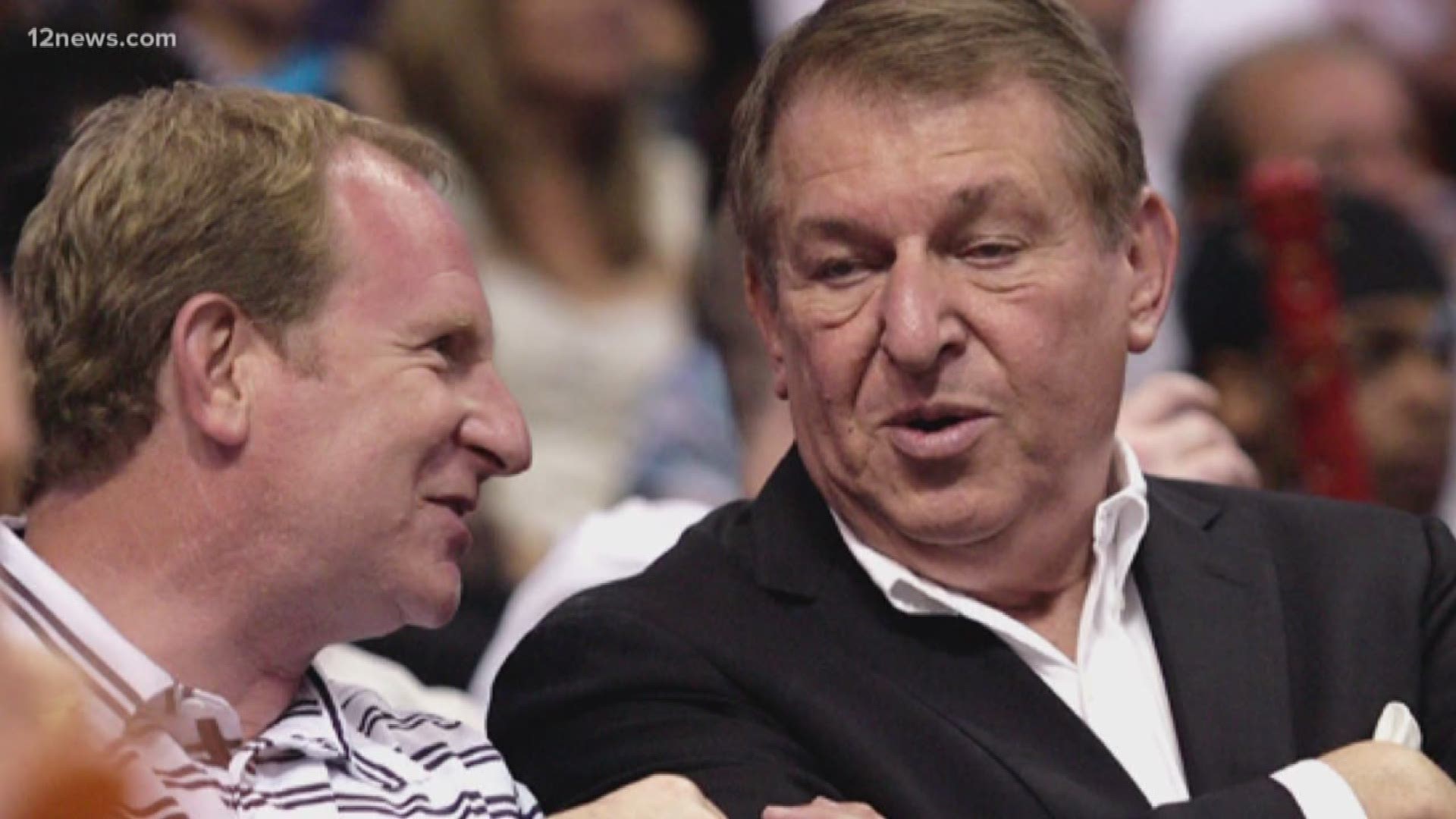 PHOENIX — Former Phoenix Suns owner Jerry Colangelo sat down with 12 Sports' Cameron Cox Friday and talked about his role in the hiring of Monty Williams, his relationship with Robert Sarver and the new era of Suns basketball and why he's optimistic for the future.

The Godfather of Phoenix professional sports, Colangelo brought the Suns to Phoenix in 1968 as the expansion team's first general manager, the youngest in professional sports at the time. He was a four-time NBA executive of the year and bought the team with a group of investors in 1987 before eventually selling the team to Robert Sarver in 2004.

Colangelo currently serves as the managing director for the United States Men's National Basketball Team, where new Suns coach Monty Williams was an assistant coach from 2013-2016.

Colangelo said he saw a lot in Williams after asking him to join the staff in 2013.

"We had meeting every day with the coaching staff for USA basketball," Colangelo said. "And Monty was like a sponge with Coach [Krzyzewski] and Coach Boeheim, taking notes, learning as much as he could. And then I saw him in action, in terms of preparation."

Colangelo talked about Williams' strong ability to pre-scout opponents and break down specific players' strengths and weaknesses. Furthermore, Colangelo said he learned a lot about Williams' character after spending weeks with him and eating meals with him.

"He's had a lot of adversity in his life and he's overcome all of that adversity, the loss of a wife in a terrible car accident, a heart condition that almost took his life," Colangelo said. "So when someone has gone through that kind of adversity and comes out of it whole, like he did, that says something about how strong he is mentally."

Colangelo said he got a call from now-Suns owner Robert Sarver, in the middle of the night while Colangelo was in Europe, but he took the call.

"As I told Robert Sarver, I said he's the whole package and he's the guy, in my opinion for you," Colangelo said. "I was excited when I got the call back that he was going to be hired."

When asked what it meant for Sarver to call Colangelo to get his opinion, Colangelo said he was happy he called.

"I'm glad [Sarver] called. I've always been available. How could I not want to be helpful? And I would at any capacity because this is something I gave birth to, this franchise," Colangelo said. "I care deeply about the franchise, I want it to be successful and it doesn't matter who the owner is or who's managing it, I'm going to feel the same way."

RELATED: Phoenix Suns will pick No. 6 in 2019 NBA Draft after lottery

"I have no issues whatsoever," Colangelo on his relationship with Suns owner Robert Sarver

Colangelo also set the record straight on his relationship with Sarver after years of rumors of animosity between the two parties since Colangelo sold the Suns to Sarver's group.

He went on to explain how his role with the franchise diminished as Sarver took over and was not the absentee owner that he was expected to be but Colangelo said he understood it was Sarver's call to make.

"From a distance, I can tell you I care deeply about the franchise and I would have been very very happy to offer whatever I could had I been called on," he said. "And I would say, going forward, that still holds true."

Why Jerry Colangelo is optimistic in the Suns' future

While Colangelo seemed unsure about James Jones' rise to GM, when he said he had not had any discussion with him or had any feel for how the 38-year-old first-time GM acts as an executive, he said he was optimistic about the front office restructuring.

"Everything about him that I'm aware of, he's a bright young guy, he's a good guy and Jeff Bower is a seasoned veteran coming in to assist him, so that seems to be a good team," Colangelo said.

Colangelo added that he knows Monty Williams well and knows the effort and expertise he will add the organization and said he thinks the Suns are building something of value with that group.

Colangelo went on to give candid remarks on young studs Devin Booker and Deandre Ayton saying he's very high on Booker but the 22-year-old needs to "toughen up" so he can stay on the court.

He said Ayton had an "OK" rookie season, saying he thinks he'll find more maturity in his game in his second year.

Colangelo has also been the chairman of the Naismith Memorial Basketball Hall of Fame since 2009 and has previously owned the Diamondbacks, Mercury, Rattlers and Sandsharks and played a key role in the NHL moving the Winnipeg Jets to Phoenix to become the Coyotes in 1996.