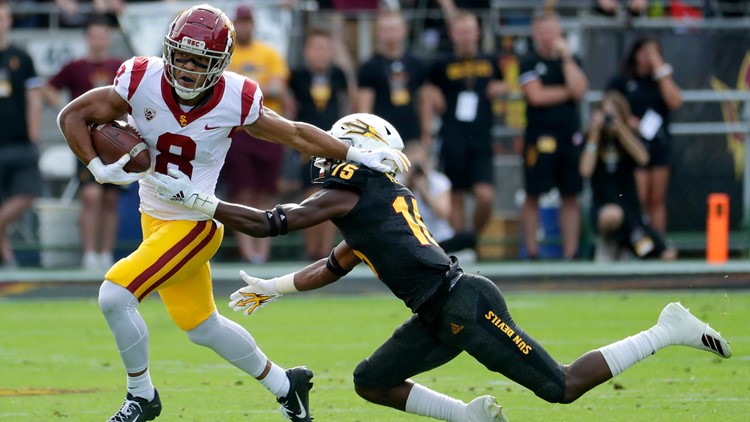 TEMPE, Ariz. — Christian Rector saw a receiver break free off the edge and slipped into coverage. Realizing the ball was coming his way, he stuck his hand up, tipped it to himself and made a diving interception.

Kedon Slovis threw for 432 yards and four touchdowns, Rector made his game-clinching interception with 25 seconds left and USC held on to beat Arizona State 31-26 on Saturday.

"I like being in that position at the end of games, having our defense out there," Rector said. "Being able to get stops, we're comfortable doing that."

The Trojans jumped on the Sun Devils with 28 points in the first quarter behind Slovis' 297 yards and four TDs passing.

As injuries piled up and Arizona State (5-4, 2-4) found a better rhythm on both sides of the ball, USC's lead dwindled from 21 in the first quarter to five by the fourth.

Facing what would have been a disastrous collapse, the Trojans found a way to eke out a win and remain in the thick of the Pac-12 South race, a game behind No. 8 Utah.

"I can't tell you how proud I am of our defense because it was put in a lot of bad situations today field-position wise," Helton said. "It was one of those situations where put the ball down coach, we got it and when we needed a stop at the end of the game, we got it."

Joey Yellen almost snatched it from them.

Making his first career start with Jayden Daniels injured, Yellen threw two touchdown passes in the first half and hit Brandon Aiyuk on a 2-yard TD pass to open the third quarter.

Yellen then found Frank Darby on a 15-yard touchdown in the fourth quarter after an interception was negated by a USC roughing the passer penalty. Darby dropped the 2-point conversion attempt, putting the Trojans up 31-26.

Arizona State negated Khaylan Kearse-Thomas' interception return for a touchdown with defensive holding and got the ball back at its 10-yard line with 3:29 left.

The Sun Devils moved quickly down the field, but Rector came up with the interception at USC's 37.

Yellen threw for 292 yards and four touchdowns with two interceptions.

"The first half we just broke down in the secondary too many times big play after big play and spotted them points," Arizona State coach Herm Edwards said. "Then we decided to rally again and we fell a little short."

Arizona State had a bye week after two ugly losses, but it didn't seem to do much good in the first quarter against USC.

Sun Devils cornerback Jack Jones then made the mistake of trying to strip the ball instead of tackling Kenan Christon, allowing him to run the final 20 yards of a 58-yard catch into the end zone for his second TD.

"I feel like just it being the start of the game, all the nerves, we come out timid and we don't let loose really until we get the feel of it, but you can't play like that," Sun Devils defensive tackle Evan Fields said.

Arizona State did play better after that, but came up short, leading to the first three-game losing streak in the Edwards' era.

USC's running back corps have been plagued by injuries, which gave Christon a chance to get more touches.

He took advantage against Arizona State, accounting for 144 yards and two touchdowns.

Aiyuk caught a TD pass, but had a bigger impact in the return game. The senior returned three kicks for 169 yards, including a 97-yard return in the first quarter.

USC kicked away from Aiyuk the rest of the game.

USC dominated early and labored the rest of the way, but came away with a much-needed road win.

Yellen was solid in his debut, but the Sun Devils dug too big of a hole and made too many mistakes to complete the comeback.

USC plays at California next Saturday.