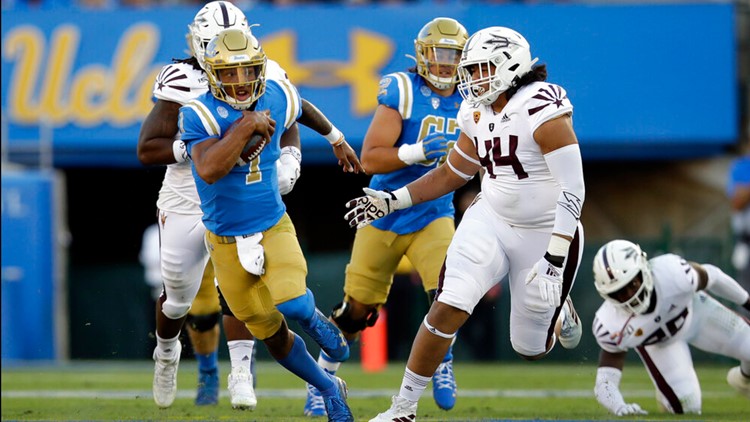 PASADENA, Calif. — Joshua Kelley scored a career-high four touchdowns and rushed for 164 yards to lead UCLA to a 42-32 victory over No. 24 Arizona State on Saturday night.

Kelley has rushed for over 100 yards in three of the past four games. The Bruins scored on five of their first six drives, including four consecutive possessions from late in the first quarter to midway in the third after it was tied at 7.

"I think when everyone in the stadium knows you are going to run it and you are still able to do it, that's a credit to the whole group," coach Chip Kelly said. "When Josh plays well I think we have a shot and obviously Josh played well tonight."

Dorian Thompson-Robinson completed 16 of 23 passes for 176 yards and two touchdowns. The sophomore injured his left leg after being hit on a scramble during the fourth quarter and did not return. Coach Chip Kelly didn't have an update on the injury after the game.

The best thing I can say is that the Baby Bruins are growing up and it's fun to see," Kelly said. "We still have a lot of things to work on, but they've gotten better week by week."

Jayden Daniels had 338 all-purpose yards and accounted for all four touchdowns for Arizona State (5-3, 2-3). He threw for 271 yards and three fourth-quarter touchdowns, completing 20 of 29. Daniels also rushed for 67 yards, including a 1-yard sneak during the first quarter that tied it.

Eno Benjamin, who came into the game second in the Pac-12 in rushing average, was held to 46 yards on 13 carries.

"Obviously, the game didn't start out like we anticipated," Arizona State coach Herm Edwards said. "We fell behind and faced a big deficit, but for me it was more than just the score. It was our emotions. We didn't handle them very good. I just felt like we had no energy early in the game."

Kelley is averaging 135.3 yards in his last four games after mustering just 52 per game in his first three. He opened the scoring with 10:53 remaining in the first quarter on a leap over the middle from 1 yard. The touchdown came five plays after Elisha Guidry recovered Benjamin's fumble at the Sun Devils 42.

The senior had 100 yards in the first half, including a 5-yard TD late in the first quarter and a 16-yard run up the middle midway through the second quarter as the Bruins took control. Both of those runs capped 16-play possessions, which is the first time the Bruins have had a pair of scoring drives of 15 plays or more since a game against Texas in 2014.

Thompson-Robinson had a 20-yard TD to Kyle Phillips with 25 seconds remaining in the second quarter and then had an 8-yard pass to Devin Asiasi midway through the third.

Daniels had three touchdown passes in the fourth quarter after the game was decided. Frank Darby had TD receptions of 12 and 27 yards while Nolan Matthews had a 4-yard grab.

"To the player's credit they played a lot better in the second half. But to play a game like that, since I've been here I've never been involved in that. I don't know what that is. I can't explain it," Edwards said.

Arizona State: The Sun Devils have been undisciplined on defense the past two weeks with penalties at inopportune times along with giving up some long third-down conversions.

UCLA: With 217 yards rushing, the Bruins have four straight 200-yard games for the first time since 2014.

Arizona State: Has a bye week before hosting USC on Nov. 9. The Sun Devils are 5-4 against the Trojans after they lost 11 straight from 2000-10.

UCLA: Host Colorado next Saturday. The Bruins have won six of the seven games played at the Rose Bowl.