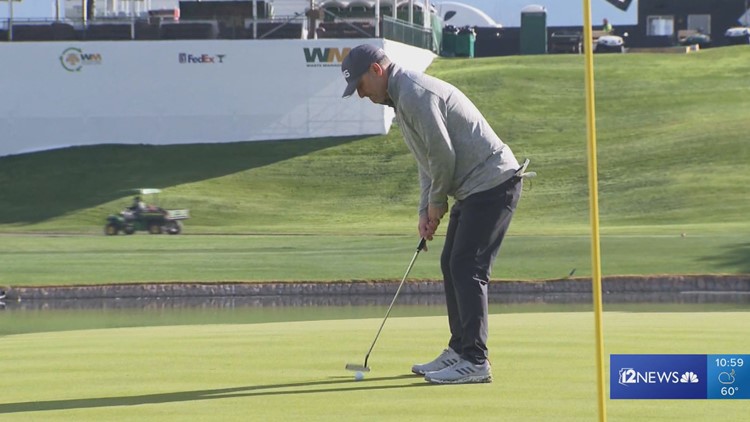 SCOTTSDALE, Ariz. — Arizona Diamondbacks manager Torey Lovullo joined Bruce Cooper and Cam Cox for 12 Sports Tonight's Waste Management Phoenix Open preview show for the second year in a row. Lovullo didn't just tear it up on the couse, but he broke down the D-backs offseason and his expectations for his team this upcoming season.

First up in the discussion was the major offseason acquisition of free agent starting pitcher Madison Bumgarner, who has played his entire career for Arizona's divisional opponent, the San Francisco Giants.

"We can't wait to see how he operates on a day-to-day basis," Lovullo said. "He made us get better in one day and he chose us. He had some options, some choices he was going to make and we're just happy he landed on us."

Lovullo has been outspoken about wanting to build a positive team culture in the clubhouse and he said Bumgarner's decision helped validate what the team is doing.

"That doesn't happen overnight. We feel like we have a very strong culture that brings in different personalities and welcomes them...When somebody like Madison Bumgarner targets you...that's very powerful," Lovullo said.

With Bumgarner, the D-backs now have six legitimate starting pitchers, but Lovullo said it's a good problem to have.

"That's what I signed up for and that's what I love, I love the fact that we have to make some tough decisions," Lovullo said. "I believe the spirit of competition brings out the best in all athletes."

It was a similar situation in Lovullo's first year in 2017 when the D-backs had six viable starting pitchers, Archie Bradley being No. 6.

"He goes in the bullpen and has a tremendous career moving forward," Lovullo said. "We like those types of problems it means we have depth. And as I've been saying since I've gotten here, you don't just go with five starting pitchers all year long. Usually, you go with 6, 7, 8, 9 and 10 and that's your depth in the minor leagues."

Lovullo spoke about 2019 Ketel Marte and where to put him on the field. Marte split time in center field and at second base last season. Lovullo wants to keep Marte at second base.

This was filmed a week prior to the D-backs acquisition of center fielder Starling Marte on Monday, which will put Ketel Marte at second base on a permanent basis.

When asked about MLB experts predicting an 80-win season out of D-backs, Lovullo was honest.

"I take it personally, I really do and if that's what they're saying, that's fine but we know inside of our clubhouse...we want to focus on the granular, about what's happening today to win today's game and at the end of the year, we'll pick our head up and we're gonna tell a special story," he said.