A photo of a cashier standing behind protective glass at a Popeyes location is going viral on Twitter and Facebook after some imply the partition is new. 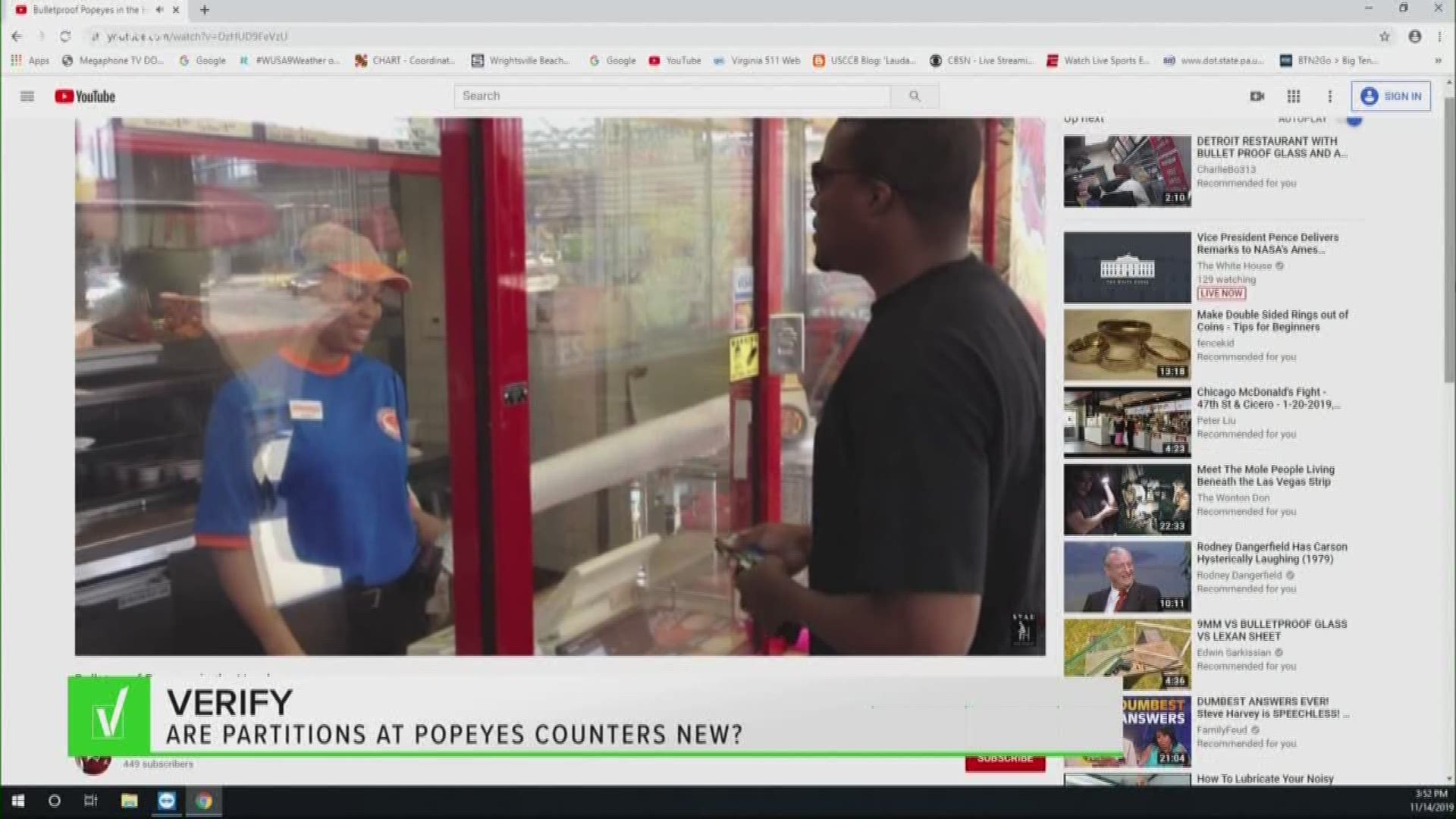 Is the Popeyes just beginning to install partitions following recent acts of violence at some locations? Is the use of partitions at Popeyes restaurants new?

No, some Popeyes stores installed the dividers years ago, pre-dating a recent stabbing at an Oxon Hill, Maryland location, an assault at a Silver Spring store and the re-release of their chicken sandwich

Popeyes chicken sandwich, which relaunched on Nov. 3, became widely popular and created a bit of pandemonium.

Just a day after bringing back the old favorite, a Maryland man was fatally stabbed at a Popeyes store. Prince George's County Police Department said a dispute broke out after the victim allegedly cut a 15-minute line while waiting to get the sandwich at an Oxon Hill location.

RELATED: Police: Fatal stabbing at Popeyes happened after a man cut in line while waiting for a chicken sandwich

A week later, on Tuesday night, Montgomery County police are investigating after a man was allegedly attacked by six juveniles at a Silver Spring Popeyes store.

More violent incidents are popping up at Popeyes locations across the country, in the days following the release of the chicken sandwich, leading some people to believe Popeyes is now installing "bulletproof glass".

So we're verifying: are these types of partitions new?

Our Verify researchers scoured the internet and found photos, videos, and news articles, that show Popeyes stores from Houston to Chicago, and Los Angeles to Vegas have been using the partitions for several years.

This photo, posted on Reddit nine years ago, portrays a Popeyes counter in Long Beach, California.

A Chicago Tribune article from 2012 describes the inside of a Popeyes store:

"A new gold plate hangs on the wall of the Popeyes at 74th Place and Stony Island Avenue, just behind the bulletproof glass that separates the chicken from the customers."

A video posted on YouTube from 2013, explores the inside of a Popeyes in Los Angeles. The glass-enclosed counter includes a little compartment, that looks like a revolving door, for employees to safely give customers their food.

Credit: YouTube
A screenshot taken from a YouTube video posted by Marion Kendrick shows the inside of Popeye's store in Los Angeles.

Several people on social media chimed in, saying the protective divider at Popeyes is nothing new.

"Most Popeyes restaurants are franchised. Across the system, franchisees implement processes, design, and operations that best meet the needs of their restaurants," a spokesperson said. "Some restaurants prefer a partition to help with restaurant efficiencies."

Store franchise owners can decide if they want to install a partition in their stores. So, every store is different.

So we can Verify, no, these types of partitions at Popeyes stores are not new. They've been used for years.

Our Verify researchers are working to find out whether any local Popeyes stores are considering the partition following recent acts of violence in November.

RELATED: Report: Man shoots Popeye's employee because his meal 'cost too much'