VERIFY: No, Nancy Pelosi did not divert billions from Social Security to fund Trump's impeachment hearings

A satirical article claiming that the Speaker of the House stole funds from the Social Security Administration is going viral. Some people were fooled. 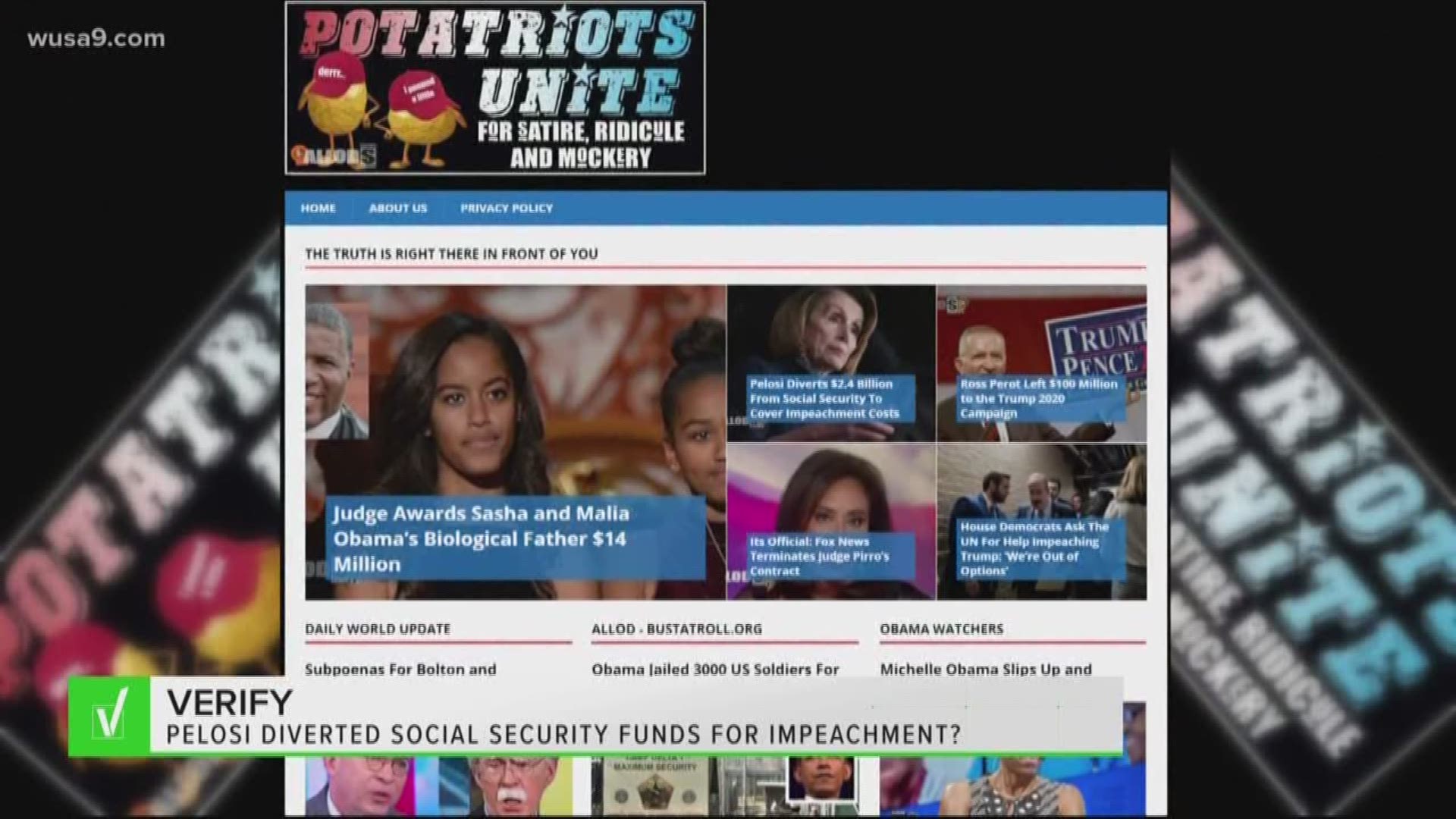 Did Speaker of the House Nancy Pelosi divert billions of Social Security dollars to pay for President Trump's impeachment trials?

No. The information comes from a satirical article posted on "Potatriotsunite.com." An expert explains why something like this could never happen.

In this polarized political climate, it can get tricky to tell what's fake news and what's not.

David Reinhart
Nancy Pelosi is spending our social security money to cover cost of her political boondoggle called impeachment. Impeachment is part of the Democrats campaign strategy. Will the people understand this?

Lots of people are posting about this on social media. But not everyone’s convinced.

A viewer asked us to verify: is that true?

We traced the claim back to a website called "Potatriotsunite.com."

It’s a satirical website, everything on their site is fiction.

"If you believe that it is real, you should have your head examined," it reads on the website's About Us page. "Any similarities between this site’s pure fantasy and actual people, places, and events are purely coincidental and all images should be considered altered and satirical."

They don’t hide it. On the Nancy Pelosi article alone, the word “satire” appears three times.

Lawson told our researchers it would be impossible for Pelosi to divert money from Social Security.

"The law is really clear here that the premiums that we pay into Social Security can only be used for benefits and the administration of the services to provide those benefits," Lawson said.

He explained that Social Security bonds are 'meticulously managed,' and are not only protected federal law but are closely watched by Social Security officials and a board of trustees, four of whom were appointed by the Trump administration.

"If even a penny of Social Security benefits was diverted in any way you'd hear about it from us, from people across the spectrum," Lawson said. "You would hear about if by news reports of the millions of people going to the hardware store to buy their pitchforks and their torches to march to Washington, D.C. It would be a huge news story because it would never happen."

So, we can verify, no, Speaker Pelosi did not divert money from social security to pay for impeachment costs.

RELATED: VERIFY: No, calls claiming your Social Security number has been 'suspended' are not real