Despite getting arrested for aggravated assault the night of the attack, the suspect has not been charged. 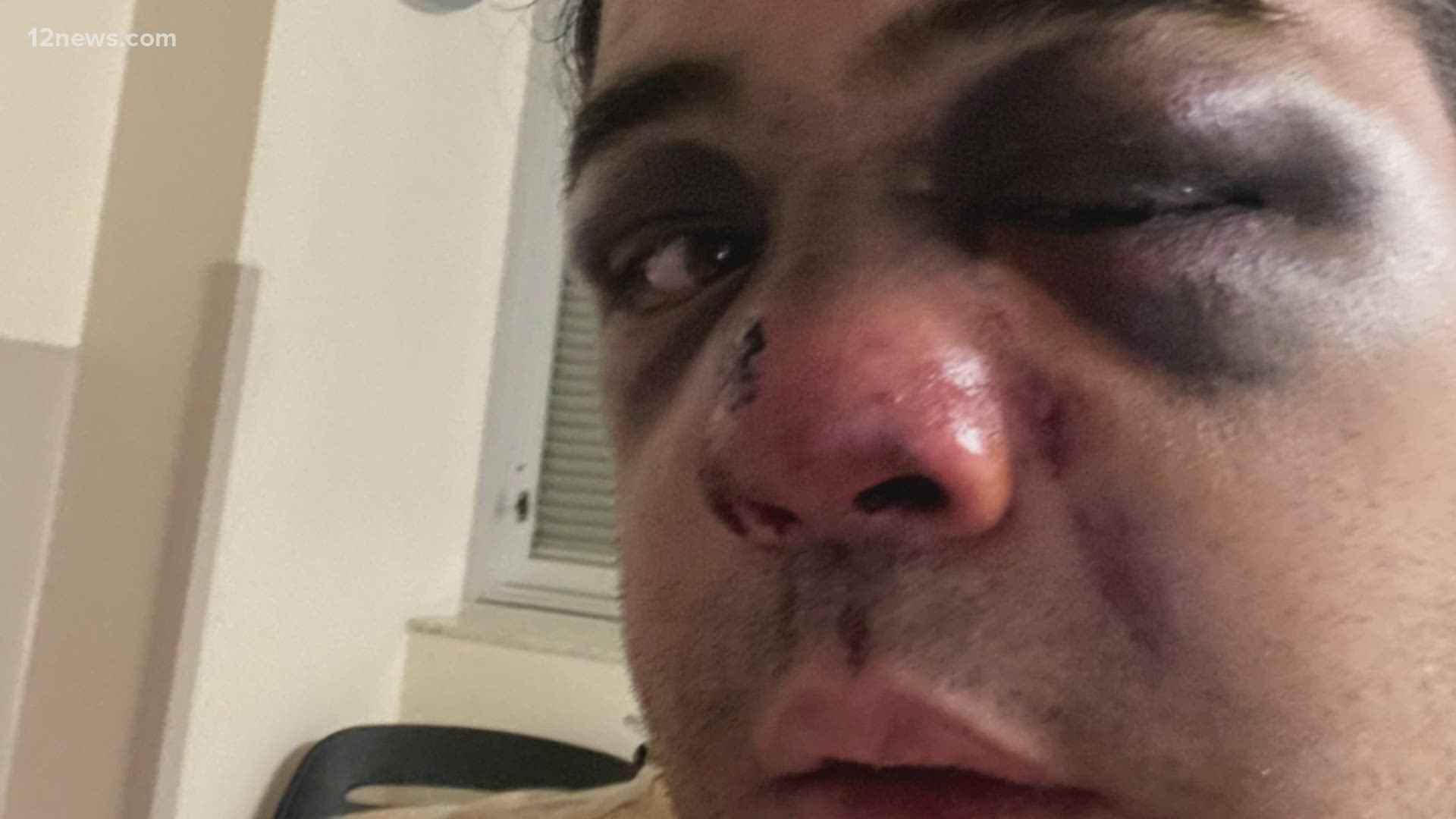 SCOTTSDALE, Ariz. — A Valley Uber driver is opening up about a terrifying incident. Scottsdale Police say he was brutally attacked, leaving him in the hospital needing surgery.

Miguel Ochoa of Tempe had been working long days driving for Uber trying to make up for what has been a year filled with obstacles including losing his business and battling COVID-19.

On the night of October 24th around 10 p.m., Miguel was exhausted but determined to meet an Uber quota meaning he would get a bonus. He got an alert to pick up passengers at the Phoenix Rising game.

“I thought about actually canceling because I saw that they were really drunk or at least appeared drunk," Miguel said.

But he didn't cancel. He planned to finish that ride and call it a night.

“They were talking amongst themselves I didn’t bother to say anything I was just driving trying to get the ride done," Miguel said.

Then, out of nowhere, as he was driving north on Scottsdale Road just south of McDowell Road, Miguel said the passenger sitting behind him hit him in the head.

“I swerved a little bit and was like what just happened?” Miguel said.

Miguel pulled over and asked the two men to get out. The man he said hit him was not happy.

“I turned around and closed the door and tried to get in and he hit me. So my reaction was to turn around and I turn around and I fell. Right as I fell he kicked me in the face," Miguel said. “He hit me so hard that I just started bleeding.”

According to witness statements in a Scottsdale Police report, the suspect didn't stop there. Witnesses say the suspect kicked Miguel over and over until, finally, a stranger jumped in to help.

“For a moment I said this guy is gonna kill me he just wouldn’t stop hitting me," Miguel said.

Making matters worse, Miguel has a blood condition that causes him to lose more blood than normal.

According to the police report, blood was on Miguel's car and the suspect's pants and shoes.

“They took me in the ambulance to the hospital," Miguel said.

Miguel learned his nose was in pieces so he stayed overnight for surgery.

“I don’t have medical insurance or anything," Miguel said.

Uber gives drivers the option to enroll in injury protection insurance but it wasn't something Miguel had looked into. He's now left with thousands of dollars in medical bills.

“I think Uber being such a big company could have a fund to help victims of violent crimes," Miguel said.

An Uber spokeswoman released the following statement in response to this incident:

“There is no excuse for the violent acts described. We will fully cooperate with law enforcement to support their investigation, and the rider's access to the app has been permanently removed.”

The suspect was arrested for aggravated assault the night of the incident but was released and has not been charged which is why 12 News is not identifying him at this time.

“This wasn’t a bar fight. This was an attack. I was actually trying to get them home safe and they attacked me. I don’t get in fights," Miguel said.

Miguel is no longer comfortable driving for Uber and is now working other jobs trying to support his wife and six children.

He says he is thankful to be alive but is hoping for justice.

“If he’s going around doing this to other people he might end up killing somebody because he wouldn’t stop hitting me," Miguel said.

Miguel's family has set up a GoFundMe page to assist with his medical costs. You can find it here.