Tempe Police are 'positive ticketing,' but no, they're not pulling over good drivers

Tempe Police Department said officers won't be pulling over drivers, but officers will find opportunities to engage and educate citizens on traffic laws.

This was the original press release Tempe PD sent out, stating officers would be giving coupons to "community members who are safely adhering to traffic laws related to bicycle and pedestrian laws."

The department says it has partnered with Circle K for the campaign for the second year in a row.

"The idea behind it is to educate citizens from the youngest to the oldest on traffic laws, bicycle laws, things like that," Tempe Police's Det. Greg Bacon said.

After we posted our clip from Today in AZ talking about the campaign, that was interpreted as officers rewarding drivers for following traffic laws, the clip went viral.

"Circle K" and "Tempe PD" were trending on Twitter for much of the day.

Today in AZ anchor Paul Gerke tweeted that Tempe officers intended to be "ticketing" (giving coupons) to drivers for following the rules of the road.

Later in the morning, Tempe Police sent out the following clarification tweet:

Bacon said officers won't be pulling over drivers, but officers will find opportunities to engage and educate citizens on traffic laws.

"We will be having positive conversations with citizens, say an officer happens to stop somewhere and see somebody, and says 'Hey would you mind having a conversation with me?' (to) educate them on bicycle laws and traffic laws," Bacon said.

Bacon said this could also work for Student Resource Officers working in schools. An SRO could see a student with a helmet, following traffic laws, and hand them a coupon.

After the conversation, officers can hand them a coupon from Circle K for either a hot beverage or a cold drink.

Reaction to the program

The people of Twitter highly objected to police pulling over drivers, but many reacted coldly to the clarified version of the program.

"Nobody wants that either. Leave people alone." @MrRyanMustang said on Twitter.

"Thank goodness.  Actually stopping people without any reason to think they violated any laws would be insanely unconstitutional." @paulgowder tweeted.

Others wanted to thank the police for the initiative.

"These comments are ridiculous!! Just say thank you and appreciate the positivity that they are trying to spread!! Great job Tempe PD!!!" Alida W. said on Facebook.

"Maybe you should change the wording of this ticketing thing because people are getting all up in arms about it. It seems like the men in blue could never do anything right for some people. UnFortunately, those of the ones with the big mouths." Gina V. said on Facebook.

Bacon said the campaign also helps with Tempe's "Vision Zero" initiative, which is to have no fatalities on the roads.

Officers will be passing out the coupons with the conversations until they run out. 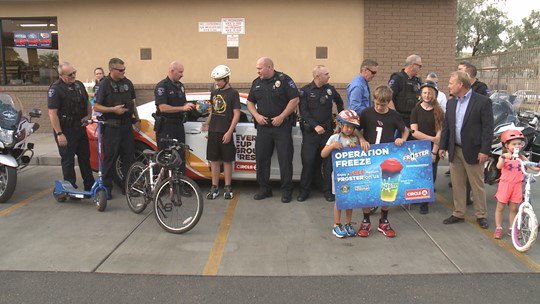 Tempe PD are 'positive ticketing' but they're not stopping drivers
Since the original press release that said Tempe officers would be giving coupons to "community members who are safely adhering to traffic laws" the department has clarified this does not mean they will be pulling people over to provide coupons.