Clifton Lewis was 12 years old when his dad built the Wigwam Motel. 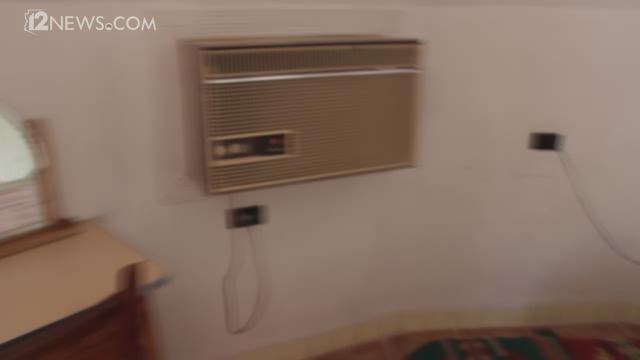 Chester Lewis constructed the famed teepee-themed Wigwam Motel along the historic Route 66 in Holbrook, Arizona in 1950.

It was opened for business in May of that year and remains open, and, a lot of the time, booked with guests looking to capture some of the ol’ Route 66 nostalgia today.

"The fellow that built them [Wigwam motels], his name was Frank Redford and he had the copyright for the Wigwam architecture,” owner Clifton Lewis said. “They eventually became friends and my dad built this."

'It wasn't iconic then, it was just Highway 66'

Clifton Lewis was 12 years old when his dad built the Wigwam Motel.

“He [his father] came out from Indiana when he was 14 years old. He was an orphan,” Clifton said. “He worked in this area building a motel in Winslow, in Kingman, one over here [in Holbrook] and the last motel was this one."

Chester discovered the Wigwam Motel design while in Kentucky -- home of the original Wigwam motels. Frank Redford helped Chester build No. 6. He paid Redford with dimes collected from in-room radios which cost tenants to use them for a certain amount of time -- an agreed-upon condition for using Redford’s motel design.

Clifton, now 78, remembers fishing in the White Mountains with his dad when “nobody knew about the fishing holes." It was the heyday of Route 66, watching parades of cars roll through town.

“We had a Texaco gas station,” Clifton said. “I would sit out and watch the cars go by.”

Clifton smiled slightly as he rattled off all the different cars he used to watch.

A lot has changed in Holbrook and along that famous stretch of highway since those days.

“It was all the neon lights along there, all the motels you had,” Arizona's official state historian Marshall Trimble said. “It’s pretty quiet, I noticed the difference. Of course, the cars are different too.”

But even today the motel is still, as it probably was in those days, nearly impossible to miss as you drive through Holbrook. The 15 concrete teepees stand tall along what is now known as Hopi Drive -- surrounded by some of those same, now retro, cars that Clifton insists still run.

Despite renovations to update and modernize conveniences over the years, the motel's look has stayed relatively the same. But that doesn’t mean there haven't been a few bumps in the road as the years have gone by for Clifton, who shares an apartment with his wife overlooking the Wigwam property.

"You don’t make much money off of 15 rooms in this economy,” he said.

'Have you slept in a wigwam lately?'

Marshall Trimble, who grew up in Ash Fork, Arizona along Route 66, remembers the first time he stayed in one. It was his first high school trip as a freshman member of his school’s basketball team.

“We heard there was going to be an initiation for the guys on the first high school sports trip,” Trimble said. “We roomed in one of the wigwams, three of us, and we locked ourselves in because we knew the seniors were going to try and get us.”

They were warned ahead of time to lock the doors, but unfortunately it didn’t work.

“The seniors actually kicked in the door at the Wigwam,” Marshall said. “The school had to pay for the damage too. I guess the Lewis family contacted the school and said some of your boys knocked in a door.”

"When school would get let out in California first week of June,” Clifton said, “it was just a flood of people coming through going east. Just a flood."

The rooms are bigger than they appear on the outside. The units either have a double bed or two and all of them have bathrooms with showers.

PHOTOS: Inside the Wigwam Motel

PHOTOS: Inside the Wigwam Motel in Holbrook

Oprah Winfrey was apparently supposed to stay in one, but decided not to.

“She said the windows were too small -- she would get claustrophobia,” Clifton said, “so she went to another place."

These days it’s not uncommon to see someone pull into the property to take pictures of the teepees or walk through the main office -- in the back of which is a small museum. Inside, you can find old Lewis family photos, an old working music box and things Chester collected during his travels, including what’s left of the family’s massive petrified wood collection.

“Petrified Forest puts Holbrook on the map,” Clifton said. “And then the wigwams.”

Not to mention the town and motel were an inspiration behind a certain Pixar movie.

Mater sits on the corner as you drive down Hopi Drive. Yes, that Mater from Cars.

The owner of Wilkinson Graphics and Auto in Holbrook, just a few places down from the motel, worked on the original real-life Mater truck and said the movie’s producers basically lived at a café at the end of the road during the movie’s production.

The movie appears to make reference to the Wigwam Motel in the form of the “Cozy Cone Motel.”

“Cars… Disneyland thinks they created 66,” Clifton said. “66 was doing fine without them, but we are doing better with them."

Members of the Lewis family have long worked in some kind of fashion at the motel -- like one of Clifton's granddaughters, who worked the front desk.

As for what’s in store for the future of the Wigwam Motel and the Lewis family, Clifton is in the process of handing over the owner’s reigns to his daughter, Karina.

The motel was listed on the National Register of Historic Places on May 2, 2002.